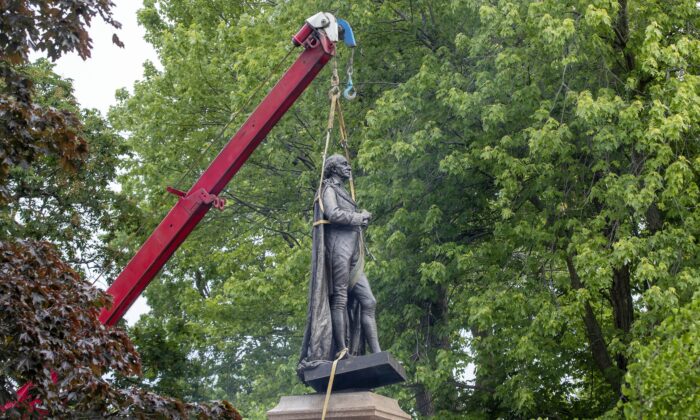 The statue of Canada’s founding prime minister, Sir John A. Macdonald, is removed from a park in his hometown of Kingston, Ont., on June 18, 2021. (The Canadian Press/Lars Hagberg)
Viewpoints

Woke Ideology Is Dismantling Canada’s Self-Confidence as a Nation

In 2002, John Fonte, a fellow at the Hudson Institute, put forth an analysis of a new strain of progressive ideology that was just emerging in both domestic and international institutions. Calling it “transnational progressivism,” he described it as an ideology that prioritized the group over the individual and saw society as being a constant state of conflict between oppressors and victims, with institutions being changed in order to have what was considered the “victim” perspective be the dominant one. This, you could say, was wokeness in the early stages of its rise to undisputed power in our institutions.

One of the preoccupations of the ideology, Fonte explained, and what makes it such a threat, is its desire to dismantle national narratives and symbols. Which, in turn, dismantles the self-confidence of a nation due to the obsession with an abstract, unattainable idea of diversity. One could reasonably argue that the prime example of a country importing such an ideology and amplifying it to a most destructive degree is Canada.

In some Canadian circles, it has become fashionable to engage in self-flagellation and outright question our foundations and delegitimize them. The vandalism and toppling of statues of our founder Sir John A. MacDonald and others is either rationalized or endorsed as a long-awaited reckoning with our treacherous past.

The arson of Christian churches in indigenous communities and other places this summer was described by one political insider as an understandable outrage at the historical discrimination against Canada’s indigenous population. According to the current government, we are a nation presently perpetrating genocide, which could by definition render us an illegitimate state. On this point, according to a certain senator, we are in no position to hold communist China to account for its repression of its Uyghur Muslim population.

In our domestic politics, with “diversity” being the guiding principle, this has sown division and will continually make our culture more polarized. On the world stage, it has only made us more uncertain of what we’d like to stand for and achieve as Canadians. This is perilous in the age of ideological conflict between powers, as Beijing has not shown in any way that it will be shy about using our paralyzing lack of self-confidence to its advantage.

During the Cold War of yesteryear, the counterculture movement of the 1960s that cemented the New Left movement as a political force made effective attempts at challenging the legitimacy of the West from within, while defending or pacifying the wretched crimes of the West’s communist enemies.

Former U.S. secretary of state Henry Kissinger wrote that this was a legacy of a new radicalism in the West that “reaffirmed” its virtues but turned them against themselves. Meaning, with the imperfections in Western society, it focused on highlighting them as a way of showing that we, the hypocrites, had no business dictating norms to the communists and confronting them on their transgressions until we got ourselves in order. Which then would curiously result in moral defences of communist actions as mere reactions to Western arrogance.

As Kissinger puts it in his book “Diplomacy,” this mindset “emphasized American inadequacies and those of its friends it was supporting; a basic moral equivalence between America and its communist challengers; the proposition that American had no obligation to defend any area of the world against largely imaginary threats; and the view that world opinion was a better guide to foreign policy than geopolitical concepts.”

The ideology did pose a threat to the West’s prosecution of the Cold War, as the immediate years following the end of the Vietnam War demonstrate. However, in the grand scheme of things, the widely held view was still maintained throughout most of the key institutions that America and her allies were, despite all their flaws, fundamentally the protagonists and forces for good.

This time around, on the other hand, self-hatred has become the regnant point of view within our institutions and those who hold any views that may express that our societies are worth defending have been almost completely drowned out. In modern, post-national Canada, the metric for a citizen’s virtue in certain quarters has become how much one can profess their hatred and contempt for Canada and all its evils.

This completely disarms us in the face of an increasingly hostile Chinese Communist Party. As Conservative MP Michael Chong has said, “Foreign policy starts with who we are.” Perhaps the rapid escalation toward another cold war will force us to rediscover what makes us uniquely good societies, in contrast to the totalitarian hellscape over which the CCP presides.