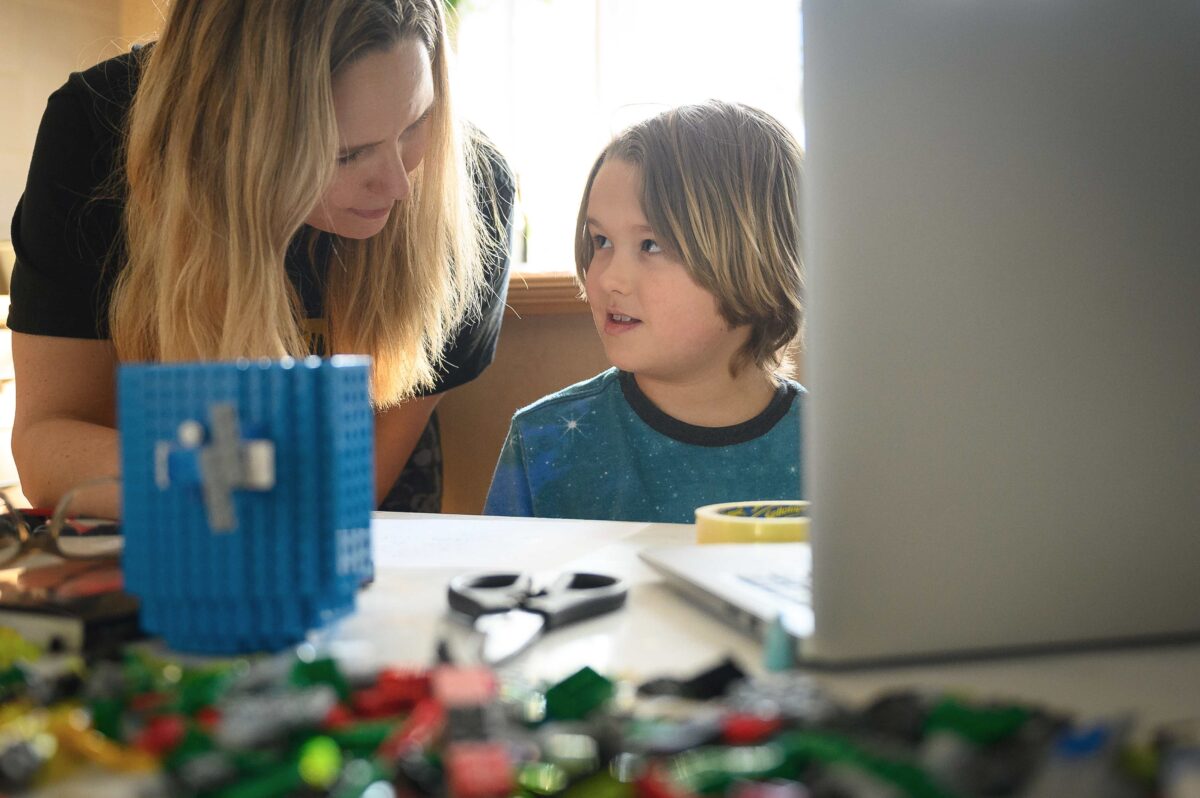 James Laurie, aged 8, is assisted in his online work by his mother Laurette as he continues home schooling, in London, on Jan, 25, 2021. (Leon Neal/Getty Images)
UK

The fear that educational material pushing ‘extreme gender ideology’ is indoctrinating their children could be nudging more parents to opt for home education.

Yesterday British MPs discussed how materials are being flooded into schools by external providers who are exposing children to “deeply inappropriate, wildly inaccurate, sexually explicit, and damaging materials” in the name of sex education.

British actor and leader of the new political movement the Reclaim Party Laurence Fox and maker of the recently released documentary “Groomed—How Schools Sexualise Your Children” told the Epoch Times that “we’re looking at an absolute cradle to grave indoctrination of our children because they’re trying to bring in a very very deeply Marxist agenda, where children are not educated at all to think freely.”

The government chose to make the teaching of relationships and sex education (RSE) compulsory in all secondary schools from September 2020, but Tory MP Miriam Cates said that despite its good intentions, the new RSE framework has opened the “floodgates to a whole host of external providers who offer sex education materials to schools.”

The MP highlighted that organizations produced games encouraging children to discuss explicit sexual acts, supplied material with violent sexual acts, and also introduced six and seven-year-olds to “rules about touching yourself” in the name of sex education.

Kim Isherwood, who chairs the group Public Child Protection Wales, has started a legal case representing 5,000 parents and grandparents to overturn a proposal by the Labour-led administration to make a new standard of Religious and Sex Education (RSE) lessons compulsory. She believes what is “happening here is the sexualisation of children, not the education of children.”

She told The Epoch Times by email that she knew “100’s of parents” who had removed their kids into home education because of compulsory RSE in Wales.

Isherwood appeared in Fox’s documentary “Groomed” to talk about her case. In this video, Fox says he “exposes the worrying degree to which politicised, divisive ideologies” including gender theory, critical race theory, queer theory, and “transgender toolkits” are being taught to kids through Personal, Social, Health, and Economic education (PSHE). In some cases, he found that activism is even part funded by taxpayers.

Through PSHE in the UK, secondary schools should include LGBT content in their teaching. Primary schools are strongly encouraged.

While acknowledging the harms of critical race theory, Fox pointed out that he believed that “gender theory was as dangerous as it comes because of the irreversible damage it does to children.”

“The horrible thing about this is that it is rampant homophobia. Kids that have body dysmorphic tendencies during the puberty phase of their lives, tend to either become gay or it goes away,” he said.

“With the mutilation of kids and as a father I can’t stand by, because of what I do for a living, children are our future,” he said.

Fox said it was “his job to highlight this stuff” to MPs, adding that Miriam Cates MP referred to much of the content of the documentary during the Commons’ education committee.

He also urged parents to demand schools give them the materials and to thoroughly read through them.

“I also believe in everybody’s right to make their own choice and to make a decision themselves. Whether they think that children are being educated or being turned into little comrades, the education system has turned into a communist indoctrination factory.”

Fox recently set up the Bad Law Project, with Harry Miller, a former police officer and part of the organisation Fair Cop, and family law barrister Sarah Phillimore as well as The Reclaim Party Deputy Leader Martin Daubney. This was in response to a “culture of coercion” and to “warn of the dangers of compelled speech.”

“We’re going find out how many of our foundational institutions are corrupted,” he said.

“And it’s not just primary education and secondary education. It’s with higher education,” he added.

“It’s every single aspect of our education and these people [activists] are coming out into life. And they are applying the same ideologically driven mantras to life and that’s not what a liberal secular democracy is all about. It’s about freedom of speech, free expression, and the rights of people to disagree,” said Fox. Gender ideology “possesses none of those things, and neither does Critical Race Theory.”

Fox said that on Twitter, he recently found himself suspended for saying that “men cannot get pregnant.”

“School leaders are best placed to decide what is appropriate for their pupils and are free to include a full range of issues, ideas, and appropriate materials, even where they are challenging and controversial—but this must always remain politically impartial. Our RHSE guidance is designed to give schools the confidence to construct a curriculum that reflects diversity of views and backgrounds, while fostering all pupils’ respect for others.”

Catholic blogger, mother of 4, and expert on parenting and home-schooling, Zoe F Willis told The Epoch Times she thinks what is “happening in the U.S., it’s only a matter of time before it comes over here.”

The total number of children receiving home education in the USA soared to 3.7 million during the 2020–2021 academic cycle. Public schools across the United States have faced considerable backlash and protests over introducing Critical Race Theory and transgender initiatives into curriculums.

“My takeaway from this (granted in the American context but soon to be here, I’m sure) is the interposing of the state between parent and child, the severing of that connection, the sacrifice of children for what is clearly wrong,” she said.

“I will end on a jollier note. I believe that those of us who are gathering our children in, protecting them now, and preparing them for a future in the world, are creating little beacons of hope and light for all. People will meet our grown-up children, individuals who will be confident and sound in the knowledge of who they are, that they are loved and that they have purpose. And some people will reject them,” added Willis.

“Yet others will be curious, intrigued, and want to find out more, drawn to these bright lights of hope. Who knows how many souls will be healed from today’s mad brokenness as a result. God has got this. All we have to do is pray, love, and trust. All will be well,” said Willis.

A Lifestyle and Philosophical Choice

“That’s not a common reason for parents to come to home education, but it is certainly one of the minority reasons as compared to education, particularly amongst Christian and Muslim parents,” Wendy Charles-Warner, a Trustee of Education Otherwise, told The Epoch Times. The charity is one of the organisations across England and Wales that promotes and supports the right of a parent or guardian to home educate.

Though she did say that last week a father decided to home educate because he discovered his daughter was being taught gender ideology at school and that she was told that she “choose whether to be male or female.”

“He doesn’t consider that appropriate for his child,” she said.

Charles-Warner said that when the 1970s really kick-started the mass movement for homeschooling, the most common reason for doing so was that it was a “lifestyle and philosophical choice.”

“Because they felt they should be responsible for their child’s education and that they could provide better education,” she said.

But as the years have gone by, and this is getting to “worrying levels” (especially with parents of special needs children), she said she was hearing a great deal of dissatisfaction with the school system.

The Values Foundation for Faith and Families in Education was formed in the UK in August 2018 to promote the views of “faith and traditional family groups in the educational sector.”

Nigel Steele, co-director of The Values Foundation, told The Epoch Times by email that “schools are supposed to be acting in loco parentis” but many parents are now finding their “children are being taught ideas that are contrary to their own values especially when it comes to Relationships and Sex Education.”

He said that probably the specific area of greatest concern is the “confusion being created in children’s minds by gender ideology and unscientific information about gender identity.”

“Parents are so concerned about the sexualising and confusing curriculum content their children are being exposed to, that they are taking matters into their own hands, saying enough is enough, and courageously stepping up to begin home educating their own children,” said Steele.

Autumn Spredemann contributed to this report.

Owen Evans
Follow
Owen Evans is a UK-based journalist covering a wide range of national stories, with a particular interest in civil liberties and free speech.
SHARE
Friends Read FreeCopyFacebookTweet
You May Also Like