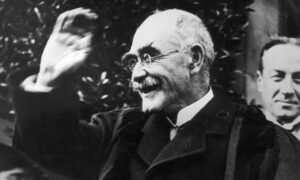 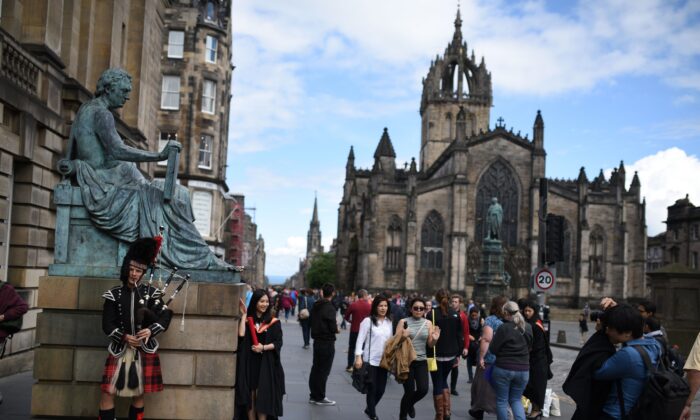 A street performer plays the bagpipes next to a statue of Scottish philosopher David Hume on the Royal Mile in Edinburgh, Scotland on June 25, 2016. (Oli Scarff/AFP via Getty Images)
UK

In recent years, universities in the United Kingdom have been targets of infiltration of far left ideology. Attacks on freedom of speech and self-censorship have become more and more acute. The University of Edinburgh in Scotland is one example.

A group of scholars from the University of Edinburgh in Scotland wrote an open letter in September 2020, criticizing the principal and vice-chancellor, Peter William Mathieson, for pandering to the ultra-left and allowing Marxist BLM students to attack faculty members. They expressed “strong objection” to Mathieson’s handling of the matter and asked for his resignation.

Mathieson, a British nephrologist, previously served four years as principal and vice-chancellor of the University of Hong Kong (HKU), from April 2014 to January 2018.

Six months after he became the new president at HKU, the student democracy protest movement “Occupy Central with Love and Peace” broke out in Hong Kong. In the middle of an escalating standoff between the Hong Kong government and student activists demanding democratic reforms, Mathieson appeared at the site to support the student protesters and advise them to stay calm and put safety first, which earned him respect and acclaim.

On Feb. 2, 2017, Mathieson suddenly announced that he would resign from HKU on Jan. 18, 2018 although his contract with HKU was originally scheduled to end in 2019. In an interview with the South China Morning Post, Mathieson revealed that his tenure at HKU had been filled with pressure as both local pro-establishment officials and Beijing officials at Hong Kong’s Liaison Office regularly interfered with his work.

“I wish higher education was not so politicised,” he said. “I think it would be simpler for people like me if politics wasn’t such a complicating factor.”

Yet “politics” interfered with Mathieson again in his new post at Edinburgh University, this time for his support of the ultra-leftist BLM students whose values are directly opposite of the Hong Kong student demonstrators’.

Hungarian-born professor Gabor Gabriel Ronay penned his own letter, published by The Times on May 14, angrily criticizing Mathieson for his acquiescence to a “small unrepresentative student group” who have been allowed to “intimidate staff, expunge historic names and silence free speech,” which leads to the climate of “illiberal thought and intimidation” at Edinburgh University.

Condemning the BLM movement as “woke” culture, Ronay said, “A flurry of snowflakes cannot be allowed to turn into a permanent winter.”

Ronay, a professor of medieval history, fled Hungary with his family in 1956 with the Russian Red Army’s military intelligence agency hot on his tail, following the failure of the Hungarian Revolution, the fight for national freedom, free elections, and multi-party democracy. He has remained a strong advocate of freedom and anti-communism.

Last summer, BlackED, a BLM group at Edinburgh University, demanded that school authorities rename the David Hume Tower, as the Scottish Enlightenment figure of the 18th century had made discriminatory remarks against black people.

A professor who had served for more than 34 years opposed the idea and criticized the organization for setting up a special zone and denying entry to white people when holding activities on campus, saying it was outright “racial discrimination.”

In the end, the University did rename the David Hume Tower, and started an internal investigation of the professor’s conduct.