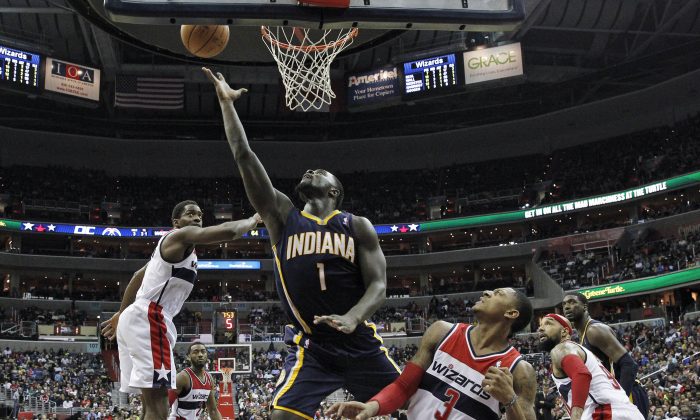 The Washington Wizards are set to take on the Indiana Pacers in the second round of the NBA playoffs beginning on May 5.

Washington was led by Trevor Ariza with 22 points and Bradley Beal with 25. All their starters were in double figures.

Paul George led the Pacers with 18 and George Hill chipped in 18, mostly on three-pointers in the last couple minutes.

Roy Hibbert had five fouls, zero rebounds, and zero points in just over 17 minutes of action.

The first two games of the series will be in Indiana.

Live streaming will also be available via TNT, for cable subscribers.

The No. 5 seed Wizards beat the No. 4 Chicago Bulls in the first round in five games.

The No. 1 seed Pacers edged past the No. 8 Atlanta Hawks in the first round in seven games.

See a capsule preview of the series from the Associated Press below. My prediction is Wizards in six.

Season series: Pacers, 2-1. Indiana routed Washington at home twice during its sizzling start before the new year, then lost on the road during its late-season slide. The Wizards shot under 40 percent in all three games and averaged 70.5 points in their losses, when John Wall shot 8 of 29. Wall rebounded with 20 points and eight assists in the Wizards’ 91-78 home victory on March 28.

Story line: Forced to seven games in the first round before getting by a 38-win Atlanta team, the Pacerswill try again to find the level they played at in the first half of the season. The Wizards had a surprisingly easy five-game victory over Chicago and are in the second round for just the third time since 1979.

Key matchup I: Roy Hibbert vs. Marcin Gortat. After a mostly miserable series against the Hawks’ nontraditional centers, maybe Hibbert will be more comfortable and effective in this round against someone who plays more his style. Gortat had a pair of 17-point games against Indiana during the season and averaged 10.8 points and 9.6 rebounds in the first round.

Key matchup II: Paul George vs. Wall. Besides his six double-doubles in the series, George defended Hawks point guard Jeff Teague, and sticking with that strategy means trying to cool off Wall, who averaged 18.8 points in his first postseason series. George struggled a bit against the Wizards, shooting 2 for 14 and 6 for 22 in the final two games.

X-factor: Trevor Ariza. The Pacers gave up a number of open 3-point looks to the Hawks and will have to keep a better eye on the Wizards’ swingman, who was 13 of 28 behind the arc against Chicago.