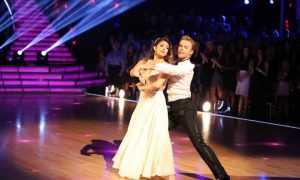 Witney Carson is one of five professional dancers left in Dancing With the Stars season 19 and fans are wondering whether she’s single or if she has a boyfriend.

Right now, it appears that Witney does not have a boyfriend.

In fact, ever since joining So You Think You Can Dance at age 18, Witney has not been definitively linked to any possible boyfriend.

Witney, who was a dental assistant before joining the Fox show, is now 21.

On Dancing With the Stars, she is teamed with Alfonso Ribeiro, who is 43. Because of the age difference, Alfonso and his wife treat Witney more like a younger sister.

After being a contestant on SYTYCD, Witney shifted over to being a dancer in the troupe on Dancing With the Stars.

She spent seasons 16 and 17 in the troupe along with close friend Lindsay Arnold, who fans saw dance in the trio with Witney and Alfonso last week.

Season 18 was her first as a pro dancer. She teamed with Cody Simpson to form the youngest team every (he was just 17) and they lasted several weeks, finishing in 9th place.

This season, with Alfonso being one of the strongest non-pro dancers, she has a shot at winning the competition.

Besides dancing and acting, Witney likes to play golf.

“You would think I would hate it because I can’t sit still for more than a few minutes but it’s true! My family has been playing for a while but I recently just started and discovered I enjoy it!” she said in her SYTYCD bio.

“I also started playing the guitar and drums.”

As for her personal life, Witney was born in American Fork, Utah and is a Mormon, according to a fan’s Tumblr page.

Witney also has over 100 relatives, a really big family.