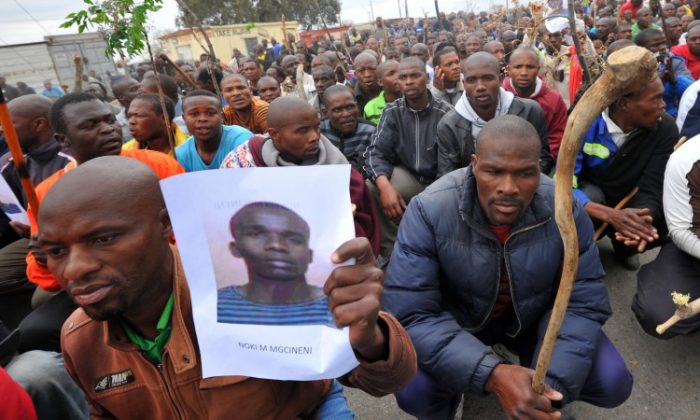 A miner carries a photo of a killed miner as thousands of striking workers singing and carrying sticks march on a South African mine in Marikana on Sept. 5 as police were accused of shooting miners in cold blood during a crackdown that killed 34. (Alexander Joe/AFP/GettyImages)
Africa

Witnesses say that some of the 34 striking miners who South African police shot and killed last month were trying to surrender.

The Legal Resource Center (LRC) human rights group told Al Jazeera that several witnesses said police shot and killed protesters who were trying to escape. Some of them were trying to hide behind rocks and some attempted to surrender to authorities.

The miners went on strike at Lonmin’s Marikana platinum mine last month, demanding a pay raise.

The LRC also said police tried to cover up the killings.

Video footage showed a large crowd of miners, some armed with clubs and machetes, advancing towards police lines on August 16. Police claimed they shot the miners out of self-defense.

Last week, 270 miners who were being held on murder charges were released pending a further investigation.

South African officials previously said they were arrested under a little-used common purpose law that was created during the apartheid era, which drew condemnation from opposition lawmakers and human rights groups.

At the same time, the striking miners will continue to strike for an increase in pay, a representative said last week.

The miners currently make between $300 and $500 per month, but the strikers want their salaries increased to around $1,500 per month.