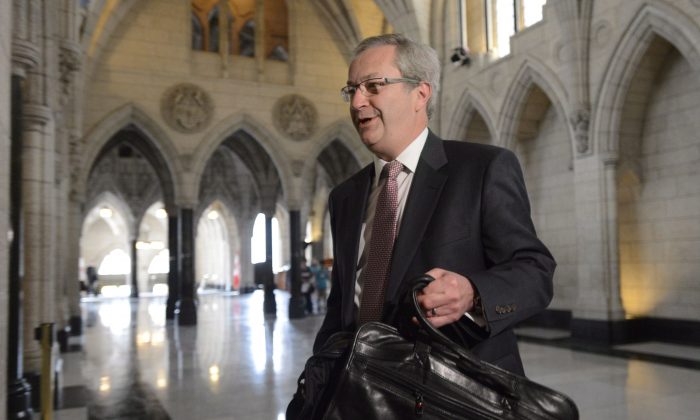 Chief electoral officer Marc Mayrand arrives at the Commons house affairs committee in Ottawa on Tuesday May 28, 2013. Mayrand confirmed for the first time that Conservative party workers have failed to co-operate with an investigation into fraudulent robocalls. (THE CANADIAN PRESS/Adrian Wyld)
Canada

OTTAWA—Canada’s chief electoral officer is confirming for the first time that Conservative party workers have failed to co-operate with an investigation into fraudulent robocalls.

Marc Mayrand appeared before a House of Commons committee Tuesday where he asked MPs once again for legal changes that would give the elections watchdog greater power to compel testimony from witnesses.

Elections Canada has been seeking more investigative tools since 2010, without government movement.

“Indeed, the investigations into deceptive calls have made us keenly aware that the Commissioner of Canada Elections needs better tools to do his work,” Mayrand said in his prepared remarks to the procedure and House affairs committee.

“Good rules are of little use if they cannot be enforced.”

Mayrand’s testimony comes just days after a Federal Court ruled that widespread phone fraud occurred in the 2011 election, part of what Judge Richard Mosley called an unprecedented voter suppression scheme by a person or persons unknown.

Mosley, however, refused to overturn the election results in the six ridings named in the court case, saying he had no evidence the fraud efforts actually affected voters. He ruled the scheme likely involved the Conservative party’s closely guarded database, but found no evidence to suggest party candidates or officials “approved or condoned” the fraud.

“Rather, the evidence points to elaborate efforts to conceal the identity of those accessing the database and arranging for the calls to be made,” Mosley ruled.

Elections Canada, and the commissioner who conducts its investigations, has been on the trail of the automated calls since May 2011 but only a single charge has been laid against a junior campaign worker in Guelph, Ont.

Tom Lukiwski, the Conservative parliamentary secretary to the government House leader, said Conservatives are concerned about the slow pace of the investigation because the party remains under a cloud of suspicion.

“Until such time as the investigation is completed, it’s very difficult for us to prove we had nothing to do with that,” Lukiwski told Mayrand. “Justice delayed, justice denied.”

Mayrand has his own frustrations.

Despite recommending repeated fixes to election law since 2010, Mayrand noted no amending legislation has been introduced and he has not been consulted by the government on its promised reforms.

The investigating commissioner, he said, is “facing the situation when people don’t want to talk to him, he’s got very little option—even though those people may not be suspect, but may have relevant information to the investigation.”

Mayrand said if legislation is not passed by next spring, there won’t be enough time to properly implement it in time for 2015’s fixed election date.

And he painted a picture, somewhat reluctantly, of Conservative intransigence in the face of the robocalls investigation.

“I think we’ll let everyone draw their own conclusions from the judgment of Justice Mosley, which speaks for itself,” he said.

However, under questioning from NDP MP Craig Scott, Mayrand confirmed media reports that the Conservative party’s lawyer took three months to respond to robocalls inquiries from Elections Canada after the 2011 election campaign—an investigation that is still ongoing.

Mayrand said that when individuals decline to be interviewed, it can’t always be characterized as refusing to co-operate.

“What would concern me is if we detected a pattern where people systematically refuse to meet with investigators—even though they are not suspect, I should point out.”

Mayrand was asked whether he saw a pattern.

“I think there are cases, I think in Guelph there were a few cases that are now publicly documented and it is a concern that certainly the commissioner has expressed,” the chief electoral officer replied.

“Basically, in some cases appointments are cancelled at the last minute. People who have agreed suddenly decide they don’t want to meet with the investigator. That adds time, delays, and makes the investigation a little bit more complex than it needed be.”

Mayrand agreed with Lukiwski that delays in getting to the bottom of the fraudulent robocalls are problematic, but said a lack of co-operation is at the root of the problem.

“Again if we go back to this issue of justice delayed, justice denied, well, that’s where it starts, among other things.”

Conservative party spokesman Fred DeLorey said in an email that the party has been co-operating.

“We have been assisting Elections Canada from the beginning, including handing over any documents or records they’ve requested,” said DeLorey.

He did not directly respond to a question about the court finding that an encrypted, password-protected Conservative database likely was used by unknown persons to commit widespread fraud.

“The court was clear: neither the Conservative party, nor any of the six (Conservative) candidates, nor their agents engaged in any fraudulent activity,” wrote DeLorey.