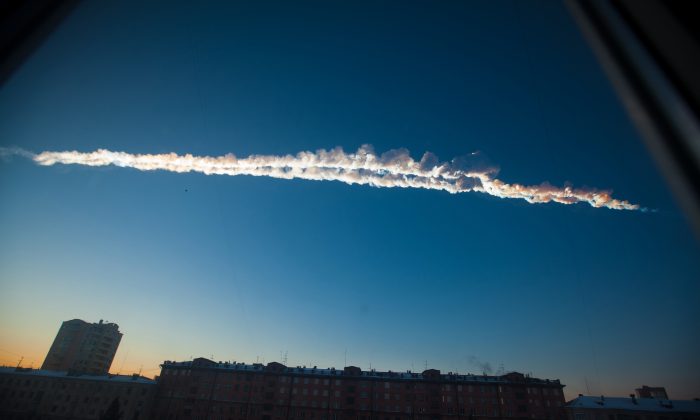 A contrail is left in the sky after a meteor exploded over the Russian city of Chelyabinsk, on Feb. 15, 2013. (AP Photo/Chelyabinsk.ru, Yekaterina Pustynnikova)
Science

Meteorites don’t often to explode in the sky and with such power that the ground shakes.

But witnesses on the island nation of Cyprus said they spotted a meteorite exploding in the night sky early on Friday morning. Police said people reported seeing a blue glow coming from the streaking object as it raced over the Troodos mountain range of the Mediterranean island, according to The Associated Press.

“We have yet to confirm that it was in fact a meteorite but it is more than likely that it was,” police spokesman Andreas Angelides told AFP.

There was no indication the meteor struck the ground, according to a Cyprus Geological Department official who added that it likely exploded mid-air. Numerous reports mentioned a “loud explosion” and shaking ground.

Authorities are looking for remnants of the object.

“It wouldn’t have weighed any more than a few kilos,” Ioannis Fakas, the honorary chairman of the Cyprus astronomical society, told the Cyprus Broadcasting Corporation, as reported by Reuters. “When it crossed Cyprus it exploded.”

“It had a 45-degree tilt and a bang was heard as it passed over Cyprus,” he continued.

Fakas said that parts of the meteorite are believed to have fallen into the sea north of Cyprus.

The event was recorded on video by security cameras in Paphos. A car windshield’s reflection apparently captured it.

A Twitter user posted an image, showing a “blue glow” over the country at around 2 a.m. local time.

In 2013, a near-Earth asteroid entered the atmosphere and exploded over Chelyabinsk Oblast in Russia, producing a large shock wave that damaged around 7,000 buildings and injured around 1,500 people, according to NASA.

Although it might seem rare for a space object to pass so close to Earth, it’s quite common, according to NASA. The U.S. space agency said there are around 30 meteorite impacts each year. Most of these go unnoticed, as most of the Earth’s surface is covered with water.