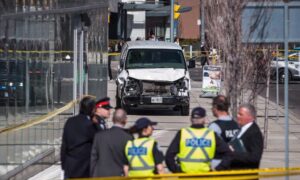 Witnesses in Michigan gave similar testimonies of the irregularities they saw in the absentee vote counting process.

One witness said that their testimonies and affidavits are so important because videotaping was not allowed at the center.

Many spoke of seeing or experiencing GOP poll workers being harassed.

“I witnessed the room erupt in thunderous applause and derogatory cheering as Republican poll workers were picked off one by one and ejected from the room by police escort throughout the day,” said poll challenger Braden Giacobazzi. “All trying to intimidate me and prevent me from doing my job, claiming that I was endangering their workers, trying to kill their people, and even holding a pen in a threatening way. Yet when non-GOP operatives would stand near the tables and harass me, no one would give them any problem at all.”

“From my skin color everyone assumes that I’m a Democrat, so they just kind of come to me and one of the ladies was saying let’s get these m-f’s out. And I’m like m-fs who? … When I pulled out my tag, she looked at me and said you’re on the wrong side,” said poll challenger Hima Kolanagireddy.

“I would get 2 or 3 of the poll workers literally screaming at me to get back 6 feet,” said poll challenger Lori Levi. “At no time were we able actually to physically see the ballot and then see it in the poll electronic book.”

Poll challenger, Karen Cortes said she barely saw any Republican poll workers. She said she saw military ballots, all in fancy stationery envelopes, and while each ballot had different names, they had the same birth date of January 1, 1900—which she said was highly unusual.

“And nobody could tell me why the birthrates were 1900. When I went to challenge those votes, the supervisor told me, and I quote, ‘We’re not doing that,'” said Cortis.

She said the supervisor eventually was convinced to write in the poll book that Karen Cortes is challenging this vote and is challenging every subsequent ballot hereafter. Cortes never got an explanation for the identical birth dates.

“I was called names whenever my mask fell even a little below my nose. I’d be called names, say I was killing people, stuff like that while they’d be talking to somebody not wearing a mask,” said independent challenger Evan Shock.

Poll Watcher Adam de Angeli said he has an audio recording of one of the training sessions, where trainers talked about how social distancing rules could be used to impede poll challengers.

“So a trainee asks, ‘so if they’re six feet back they can’t actually see?’ And the trainer says, ‘exactly, not unless they’ve got really good vision or they’ve brought their binoculars,'” said de Angeli.

He said the city was setting up a confrontational setting where poll challengers were unable to fulfill their duties. His testimony was filed into a lawsuit on Oct. 23 and was settled with the secretary of state who said they would amend the policies.