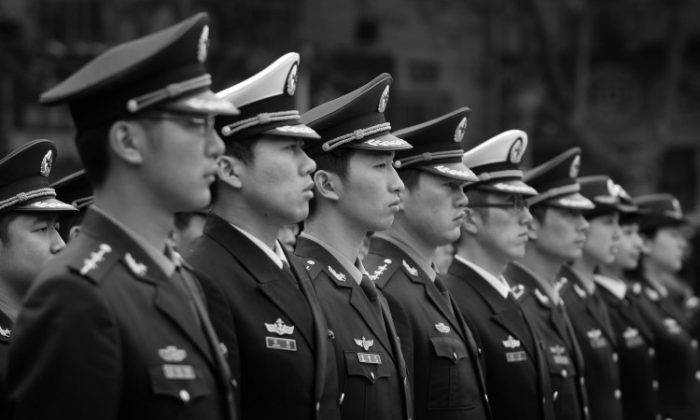 Army officers attend a ceremony in front of the Monument in Memory of the Victorious Crossing of the Yangtze River, on April 23, 2008 in Nanjing of Jiangsu Province, China. (China Photos/Getty Images)
China

Without Strongman to Hold Center, Party Devours Self

With each successive generation of leadership in the Chinese Communist Party, the power wielded by the man that sits at its helm has become less. And the power held by the competing interests groups and factions in the Party has become greater, to the point where factional politics and infighting may threaten the regime’s own rule in a crisis.

Before the CCP had seized power in 1949 its leader, Mao Zedong, had already begun establishing his cult of power. “Mao no doubt set himself up as a god-type of figure. No one dared question his authority,” says Jason Ma, a political commentator for the New York-based New Tang Dynasty Television. “Deng Xiaoping was from the military and had huge personal connections; nobody dared to challenge him,” Ma said, listing off the Party’s rulers.

Jiang Zemin and Hu Jintao, the third and fourth generation of leaders respectively, were both anointed by Deng, but their personal authority was questionable, Ma says.

Arriving at the fifth generation of leaders, things look rather different.

“In the succession of Communist Party leadership, they think [Xi Jinping] is the only figure that’s acceptable to different political forces within the Politburo,” said Cheng Xiaonong, former adviser to ousted Premier Zhao Ziyang and former chief editor of Modern China Studies, in an earlier telephone interview about Xi’s succession.

“Xi is basically from nowhere, and his only advantage is that he is not a strong enemy of any faction inside the CCP system,” Jason Ma says. The flip side is that the roots of Xi’s power and his base of influence is weak. The enemies he has created are fewer, but the number of people whose careers he has nurtured is also less.

“It’s not like the U.S. where Obama went through campaigning and gained the people’s support through votes. In China there’s no people’s support, everything is a subtle power struggle,” Ma said.

“When he comes into power I don’t think he’ll have strong control of everything or anything. He’ll only be the person sitting there at the center of all this conflict, and he will not be able to do anything.”

Arthur Waldron, professor of International Relations at the University of Pennsylvania, wrote in an email to The Epoch Times: “Xi is the first putative successor not approved by Deng Xiaoping. Without the strongman’s shadow, the political players in China are finding consensus impossible. Under these conditions we may expect continued uncertainty.”

The conditions over the next year may create a perfect storm, according to Ma.

“Right now the economy is still growing at 8 or 9 percent, but if there’s internal unrest among ordinary people and also a slowing in the economy, the conflicts between interest groups will become harder and more brutal,” Ma said.

“With a new leader coming to power, trying to control things and getting rid of people he can’t trust—when all these things happen together, it’s a recipe for potential disaster,” he said. “I don’t think there’s anyone who can prevent the CCP from falling into internal chaos.”