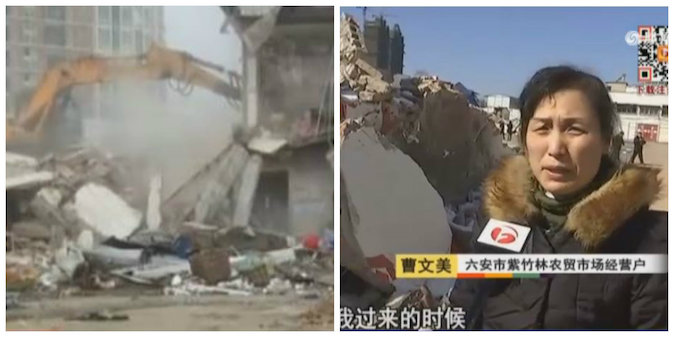 (L-R) A demolition crew is seen tearing down shop buildings in the city of Lu'an, Anhui Province, and shop owners speak to the Chinese press after the demolition in a broadcast dated Jan. 26, 2016. (Screen shot/Phoenix Television)
China

Without Permit, Local Police in China Force Through Demolition of Shops (Video)

Shop owners at a farmer’s market in China could only complain angrily to Chinese media as local police quickly and illegally demolished their brick and mortar stores—all in the name of a city renewal project.

In a popular video on Chinese social media, shop owners tangled fruitlessly with urban officers and a demolition crew at Zizhulin Farmer’s Market in Lu’an, a city in the western Chinese province of Anhui, on Dec. 14, 2015. The video was shot by one of the shop owners, and was recently picked up and aired by the Anhui Public Television Network.

“Demolition department, pick up the pace and move these things! If you guys don’t work quickly, you’re fired,” yelled a local urban officer through a loudspeaker in the video.

He continued: “To those from the moving company, I am not going anywhere today if we don’t tear down this place!”

The urban officers, better known as “chengguan,” are the bottom rung law enforcers, and often lawbreakers, in Chinese cities. They have gained notoriety in recent years for their violent, thuggish behavior. Ordinary citizens universally loath chengguan, and frequently share their fresh violence on Chinese social media.

In the recent video, the chengguan could be seen preventing two female shop owners from entering their stores. Amid the chaos, an excavator wrecks the building while workers from the moving company haul away the shop owner’s goods.

The shop owners later told Anhui Public Television Network that the chengguan failed to produce any legal paper authorizing the demolition. And the local authorities didn’t get a court order, a requirement specified in the official expropriation document that most of the shop owners refused to sign.

“My shop was already torn down when I got there,” said shop owner Tu Changqing, in the Anhui television interview. “All my wares were seized and thrown out.”

“The demolishing of our stores was an act of barbarism,” said Wang Jiabin, another store owner. “In fact, we were cut off electricity and water since last October.”

Xu Bin, the director of the district Land Resources and Housing Administrative Bureau in Lu’an City, told Anhui Public Television Network that he wasn’t aware of the “time or procedure of the demolition.” But in the video uploaded by the shop owners, a chengguan could be clearly heard shouting “Xu Bin, where have you gone,” suggesting that he was aware of what was happening and could even be on site.

“What hope is there with a government like this?” wrote a netizen from Weinan, Shaanxi Province.

Another netizen from Henan Province with the moniker “User5710538077” wrote “It is a miracle that the Chinese Communist Party is still around!”

“Since the Communist Party interferes with people’s livelihoods, it won’t live long either,” wrote another netizen from Yulin, Shaanxi Province.