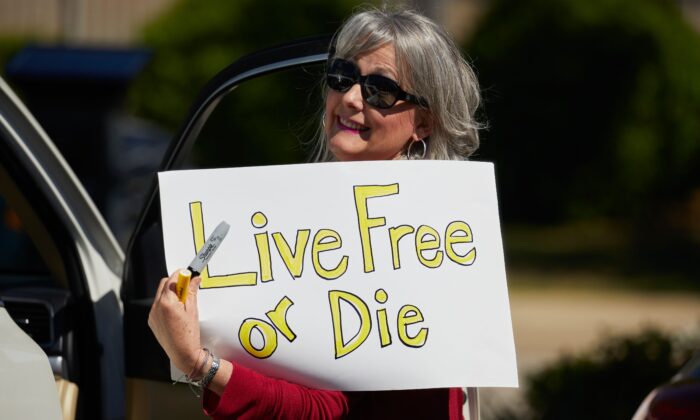 Protesters demonstrate against the coronavirus lockdown at a parking lot adjacent to the North Carolina State Legislature in Raleigh, N.C., on April 14, 2020. (Logan Cyrus/AFP via Getty Images)
Business Columnists

Without Economic Freedom, We Are Sunk

Jared Kushner reports in his book on a strange conversation between Donald Trump and Anthony Fauci. It took place in the White House, April 15, 2020. The economy was in shambles. Businesses were shut. Churches and schools were closed. Rights were being trampled on all over the country. The virus police ruled the country.

By this time—two weeks had become a month and the scary doctors saw no end in sight—Trump had grown incredulous about his decision to greenlight the lockdowns a month earlier.

“I’m not going to preside over the funeral of the greatest country in the world,” Trump told Fauci.

“I understand,” Fauci responded. “I just do medical advice. I don’t think about things like the economy and the secondary impacts. I’m just an infectious diseases doctor. Your job as president is to take everything else into consideration.”

Very clever that Fauci. His advice was in fact economic. Under his influence, the whole of our economic lives were in upheaval, and it was all done in the name of “public health.” But when confronted by this grim truth, he demurred and said essentially “Hey, I’m not an economist.”

You see what is happening here. Fauci was mainly responsible for this bogus wall between health and wealth. He was working on saving lives, not Wall Street. It’s sad that his influence prevailed, in part because there was absolutely no one in Trump’s inner circle who offered a contrary view. Trump had been hornswoggled and now did not know what to do.

A few days later, Fauci was giving one of his typically dreary media interviews about how terrible things are and why we needed to lock down longer. Trump was fed up and confronted him again.

“Anthony, you’ve got to be more positive,” said Trump, still under the belief that because he was president, he should be in charge. “We need to give people hope.”

Fauci said no: “My advice in situations like this is that we should make people feel as bad as possible. We want to explain the worst possible scenario. If it comes true, we were right. If it doesn’t, then we did a better job than people expected.”

I find that disgusting. Truly.

“I’m not like that,” Trump said. “I take the opposite approach. I am like a coach who believes in the team even if they are down to give them a reason to keep fighting. We can’t let people give up. People are losing their jobs. They are drinking and doing drugs; they are depressed, suicides are going up. That is not America. We will get through this, but we have to stay positive; we have to give people a reason to keep their businesses open so that our country can bounce back.”

“Fine, I’ll be a little more positive,” Fauci said but then changed nothing.

What a world, what a time. Trump was surrounded by people who toggled between idiotic and evil. No question that he was the most sensible person in those circles. There were good guys in government, people like Paul Alexander and some others. But they could not get to the president. They could not cut through the thicket of Kushner and his college buddies, Fauci and Birx, plus the ridiculous Mike Pence, who carried water for the lockdowners while pretending to be some stalwart defender of old-world values.

What is the lesson of all of this? There are many but among them should be one that elevates the status of economics as such. This lesson should pertain to the left and to the right. The lesson: without economic freedom, there is no freedom at all. And without freedom, we have no chance of prosperity, wealth building, or even a happy life itself.

People really do need to understand this. The experience of lockdowns should cause us all to revisit Chapter 7 of “The Road to Serfdom” by F.A. Hayek. I swear that it is one of the most brilliant essays ever written. He is addressing a series of thinkers from the 30s and 40s who said that their intention was merely to plan the economy but not take away people’s freedom. Hayek said that this would require dictatorship. There is no other option.

“Most planners who have seriously considered the practical aspects of their task have little doubt that a directed economy must be run on more or less dictatorial lines. That the complex system of interrelated activities, if it is to be consciously directed at all, must be directed by a single staff of experts, and that ultimate responsibility and power must rest in the hands of a commander-in-chief whose actions must not be fettered by democratic procedure …”

That was precisely what we obtained with lockdowns from spring 2020 and following.

“The authority directing all economic activity would control not merely the part of our lives which is concerned with inferior things; it would control the allocation of the limited means for all our ends. And whoever controls all economic activity controls the means for all our ends and must therefore decide which are to be satisfied and which not. This is really the crux of the matter.”

“Economic control is not merely control of a sector of human life which can be separated from the rest; it is the control of the means for all our ends. And whoever has sole control of the means must also determine which ends are to be served, which values are to be rated higher and which lower—in short, what men should believe and strive for. Central planning means that the economic problem is to be solved by the community instead of by the individual; but this involves that it must also be the community, or rather its representatives, who must decide the relative importance of the different needs. The so-called economic freedom which the planners promise us means precisely that we are to be relieved of the necessity of solving our own economic problems and that the bitter choices which this often involves are to be made for us.”

What are the results of this? It means the end of freedom itself, including all civil liberties. It wrecks not only the prospects for wealth creation. It destroys the human spirit. I’m particularly intrigued by the following passage from Hayek because it is subtle and shows why so many suffered massive psychological damage from Fauci’s scheme.

“What matters is that we have some choice, that we are not absolutely tied to a particular job which has been chosen for us, or which we may have chosen in the past, and that if one position becomes quite intolerable, or if we set our heart on another, there is almost always a way for the able, some sacrifice at the price of which he may achieve his goal. Nothing makes conditions more unbearable than the knowledge that no effort of ours can change them; and even if we should never have the strength of mind to make the necessary sacrifice, the knowledge that we could escape if we only strove hard enough makes many otherwise intolerable positions bearable.”

Now, at the time, many among the haute bourgeoisie said “Hey, this is not so bad. I can stay home and watch movies and enjoy myself. Lockdowns have not hurt me at all.”

Well, good for you! Many others were not so lucky. But there is a more profound point here. The issue is not so much about the position in which you found yourself, whether in your PJs on a comfy sofa or driving trucks to try to get food to people. The real issue is that whatever position you found yourself, you were forced to be there. You were essential or nonessential, laptop or real world. Everyone suddenly found themselves conscripted into their status.

As Hayek plainly says, this makes conditions unbearable. Nothing, he says, is more unbearable than the loss of the freedom to make a choice. Even if you don’t make a different choice, just knowing that you can is what underscores the difference between the life of a dignified human being and an animal. The people who locked us down took away not only our range of choices but our humanity itself.

So let’s return to the plotters in the White House in those fateful days of March and April 2020. They sat around weaving plans for the rest of us while that Svengali-like media star Fauci kept urging Trump to keep everything shut for the sake of human well-being. Kushner and his college buddies plus Birx and Pence, and a few others; all were there to keep Trump in the dark on his real options. It’s a terrifying look at what happens to the world when even the most sincere men are given total power. They become truly insane.

The lesson is for everyone. Never, ever, under any circumstances and under any guise, should there be a compromise with the principle of economic freedom. That is happening all over the world today, and look at the results! The world is on fire, with masses of people the world over panicked about how they will heat their homes or feed their families.

Fauci punted on the question of economics. He said it is not his business because he is an infectious disease doctor. The right answer should have been: then go cure someone and leave the rest of the country alone! But even that would not have been a good idea, because he likely would have just found some poor schlub he would intubate for no good reason.

This entire story is a fiasco but it began with the huge error of thinking that one could separate economics from public health and both from the rest of life. No one should ever make that mistake again.