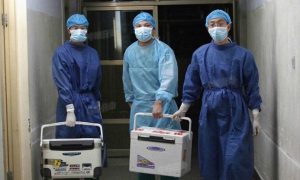 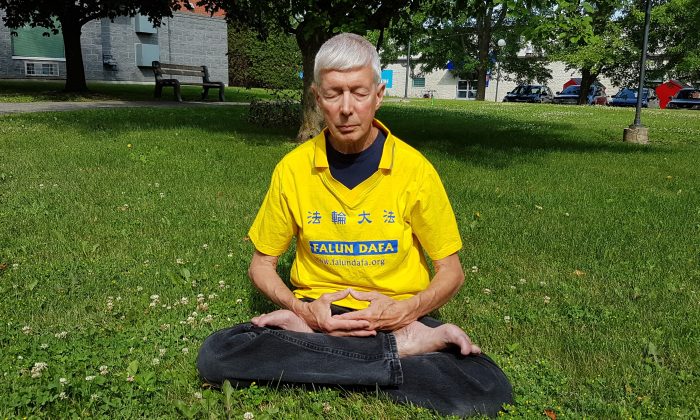 Falun Gong practitioner Gerry Smith, seen here meditating in a park, was ordered by the CEO of the Ottawa Dragon Boat Festival to remove his T-shirt bearing the name of his spiritual practice on June 22, 2019, at the festival. John Brooman told Smith that the Chinese Embassy is a sponsor of the festival and didn't want Falun Gong adherents at the event. (The Epoch Times)
Canada

A member of the Ontario provincial parliament says it’s “intolerable” that the CEO of Ottawa’s Dragon Boat Festival demand a member of the public remove his T-shirt to avoid offending the Chinese Embassy, a gold sponsor of the festival.

MPP Randy Hillier also says he is going to request that taxpayer dollars be withheld from the festival “if they are going to practice these discriminatory policies.”

During the festival at Mooney’s Bay Park on June 22, CEO John Brooman approached Falun Dafa practitioner Gerry Smith, who had just sat down at a picnic table with his friend’s 9-year-old son, and told him to “take off your shirt.”

Smith recalled that Brooman introduced himself and explained that the Chinese Embassy is a sponsor of the festival and does not want Falun Dafa practitioners to be there. He said that by wearing a shirt with the words Falun Dafa on it, Smith was “politicizing” the event.

“This is unacceptable, it’s intolerable, that a festival sponsored by public tax dollars is willing to be coerced by the communist Chinese government,” says Hillier.

“We have laws in this country to protect freedom of speech, freedom of assembly and expression, and we cannot allow a foreign communist government to infringe and obstruct our fundamental freedoms.”

During the conversation, Smith learned that Brooman didn’t only object to clothing with “Falun Dafa” on it at the festival site, he didn’t want to see those shirts anywhere else in the park either.

At the time, a group of about eight practitioners was doing their meditation exercises in another part of the park. Despite their being outside the festival fenced-in area, Brooman told Smith he wanted them to leave. “He said ‘I can call to have them removed, gesturing to the phone on his waist,’” according to Smith.

Falun Dafa, or Falun Gong, is a traditional meditation practice that has been brutally suppressed by the Chinese regime since July 20, 1999.

“Mooney’s Bay Park is a publicly owned park. It is open to everyone,” says Hillier. “It is unacceptable that somebody would suggest that their use of the park is exclusive and that others would be infringing upon their use.”

Hillier says he is going to write a letter to both festival and government officials suggesting taxpayer dollars be withheld from the festival, noting that the festival also receives funding from the provincial and municipal governments.

“I’ll be sending a letter off not only to the Dragon Boat Festival, but also to the premier, the Minister of Tourism, and the City of Ottawa, demanding that all funding, all sponsorships of public taxpayer dollars be withheld and not ever provided to the Dragon Boat Festival if they are going to practice these discriminatory policies against Falun Gong, and to be an arm of oppression of the Chinese government.”

‘We Are Proud of What These Words Signify’

According to local practitioner Kathy Gillis, the Ottawa Falun Dafa group doing the exercises at Mooney’s Bay Park during the festival—but outside the fenced-in festival grounds—is nothing new.

“We’ve been going there almost every year for more than 10 years to do the exercises, mostly at the same spot each year,” says Gillis, one of the handful practitioners whom Brooman wanted to throw out of the park on June 22.

Gillis said that on June 22, while Smith and a few others were meditating, she showed the exercises to someone who was interested in learning about the practice, which often happens when the group does the exercises outdoors.

“Some of us wear shirts with ‘Falun Dafa’ and ‘Truthfulness, Compassion, Tolerance’ on them because we are proud of what these words signify and we benefited from this practice that improved our health and well-being,” says Grace Wollensak, a spokesperson for the group.

“In fact, before the persecution campaign began, people practised Falun Dafa’s exercises every day in parks across China. No one, not even the Chinese regime at that time, perceived their presence in the parks or the words Falun Gong or Falun Dafa as ‘political,’” she added.

‘We Have to be Forceful’

News broke about the incident last week, and several media outlets have since picked up the story.

Rabbi Dr. Reuven Bulka, the leader of Congregation Machzikei Hadas in Ottawa, said he was glad to see the incident getting so much coverage in the media, but the real issue people should be focusing on it the Chinese regime’s macabre practice of killing Falun Dafa prisoners of conscience for their organs to fuel China’s immensely lucrative transplant industry.

“[It got more coverage] than all of the organ harvesting that has been going on in the last 13 years,” said Bulka, the former chair of the Trillium Gift of Life Network, Ontario’s organ and tissue donation agency.

“So one T-shirt did more than people being killed. But that’s the crazy world we’re living in, where the media decides on what’s important. But at least they did cover this, and hopefully it’ll get people thinking.”

Bulka said “we need to push our representatives” to push the federal government to in turn put pressure on the Chinese regime to end forced organ harvesting.

‘Blatant Violation of Freedom of Expression’

“The fact that China would be able to exert that kind of influence, such that a Canadian citizen attending a lovely event on a summer afternoon is told that he has to remove a T-shirt because the Chinese government, a sponsor of the event, finds the message on his T-shirt objectionable—that is a blatant, inexcusable violation of freedom of expression that should never be allowed to happen in Canada, and it certainly shouldn’t be allowed at the hands of a foreign government,” he says.

He says the issue is indicative of a broader concern that Amnesty and its partners in Canadian Coalition on Human Rights in China have been noting for a number of years.

“[That is,] the various both direct and insidious ways that Chinese officials or agents somehow aligned with the Chinese government … take action that violates human rights here in Canada, through intimidation, through harassment, through infringements of the right to the freedom of expression, through threats that are extended to family members back in China.”

“It is time for the Canadian government to really get a handle on this concern,” he adds, “and find some strategies to ensure that, at the minimum, the rights of the people here in Canada are not going to  be violated by Chinese government action.”

In a letter to Brooman following the incident, Smith said he was “shocked, embarrassed, and taken aback” by his stance. “This is Canada, and Canadians should not be taking direction from the Chinese Embassy,” he wrote.

Smith didn’t receive a reply, but in a July 10 email in response to a letter from the Ottawa Falun Dafa community seeking an apology, Brooman reiterated that the festival “did not want to politicize our family event.”

But Falun Dafa spokesperson Grace Wollensak says it is actually Brooman who is politicizing the event.

“The only person who is politicizing the event is Brooman himself, who perceived that the words ‘Falun Dafa’ on Mr. Smith’s shirt which identify his faith needs to be suppressed at this public event,” she said. “What is his motive other than appeasing the Chinese Embassy by attempting to remove Falun Gong practitioners not even on his rented premises?”

“It’s alarming that the Chinese Embassy is extending its persecution of Falun Gong to this community event, and more so that Brooman found it appropriate to comply with the Chinese Communist Party line to discriminate against a Canadian group on Canadian soil,” Wollensak added.

Brooman did not reply to a request for comment.

The Epoch Times has previously reported that China uses its overseas United Front Work Department to recruit spies and infiltrate Chinese communities to spread its propaganda and sway the opinions of local Chinese. The agency is skilled in the tactics of psychological warfare and political subversion.

“We know that there is a far greater involvement by the Chinese government in Canadian society than what they’d like people to know about,” says Hillier.

“This is just one example, and it’s just intolerable in my view. If we’re going to have festivals that are going to be operatives of the Chinese government, we should certainly not fund them, and we certainly should not promote them, but condemn those sorts of actions.”