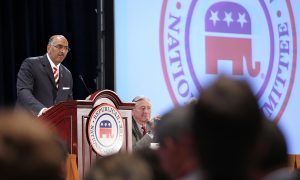 Why We Should Embrace President Trump’s Nationalism
0 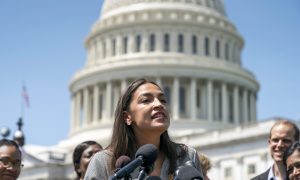 A View From Canada: US Democrats Should Worry Us All
0 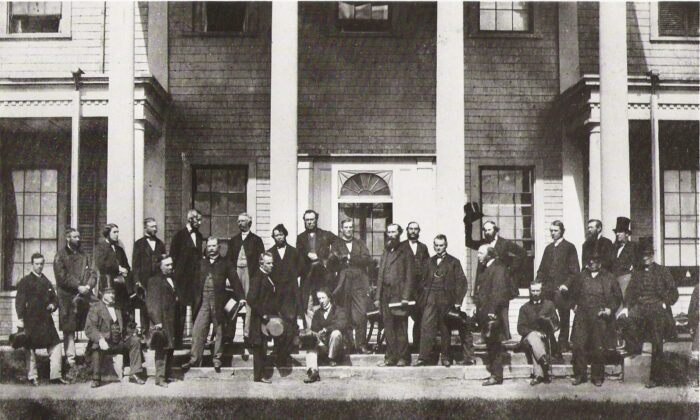 Delegates at the Charlottetown Conference in Charlottetown, Prince Edward Island, in September 1864, the first of a series of meetings that ultimately led to the formation of the Dominion of Canada. (Public Domain)
Viewpoints

Whither the Course of Canadian Nationhood?

In the nations of the North Atlantic triangle, regardless of ethnic, racial, or religious particularities, our forebears once felt a deep pride in being Canadian, American, or British. Tales of heroic actions, historic compromises, and nation-building projects filled the pages of our history books and the hearts of young citizens.

Today, there is an awkward aversion to public displays of “nationalist” sentiment. Within our best-schooled communities, nationalistic movements like Brexit and MAGA are regarded as unfortunate throwbacks to a more primitive stage in human development, where bigotry, xenophobia, militarism, and warmongering were the order of the day.

In elite circles, the proper course of history is seen to be set by “multiculturalism” and global integration. This view is driven home daily by the West’s formative institutions, where young people are taught that sound planetary policy and human decency can only be achieved through extra-national world organizations. In Canada, this disposition has particularly been emphasized by Prime Minister Justin Trudeau, who, in 2015 while defining Canadian values, declared our country to be the world’s “first post-national state.”

Over recent years, however, anti-nationalist sentiment has been challenged by conservative scholars and the course of human events. A case in point is a recent book titled “The Virtue of Nationalism,” by Israeli author Yoram Hazony.

Hazony begins by reminding readers that affection for free, independent nationhood was not always regarded as a source of evil in the world. A diverse collection of historic leaders like Woodrow Wilson, Franklin Roosevelt, Mahatma Gandhi, David Ben-Gurion, Margaret Thatcher, Ronald Reagan, and now Donald Trump have all regarded sovereign nations as a legitimate political order for a fair and peaceful world order.

In Canada, 19th-century icons like Sir John A. Macdonald and Sir Wilfrid Laurier viewed our nation as one that includes Indigenous Peoples, two official languages, a multi-ethnic population, and very distinct regional cultures. Leaders on both sides of the political aisle agreed that families and unique communities deserved to be nurtured and to survive within the bonds of a united Canadian nation.

Nationalists are not, as some contend, natural haters, but they are inclined to think about “national values.” For the first 100 years of our Confederation, from the historic 1864 Charlottetown Conference and 1867 London Conference to the 1967 world’s fair in Montreal, Canadian values unapologetically included democratic political institutions; individual liberties; equality under the law; property rights; freedom of speech; fair treatment of all citizens regardless of ethnicity, religion, or class; and a welcoming disposition toward immigrants who wished to become part of our national community.

For patriotic citizens, “nationalism” simply meant that their countries should be able to chart their own course, cultivate their own traditions, and pursue their own interests. What nationalists dislike, in its past and present forms, is “imperialism.” Empires appeared throughout history. From Pax Romana to crusading religious kingdoms, European mercantilist empires, and 20th-century communist regimes, imperialists sought to dismantle nations and unite humankind under all-embracing economic and political “new world orders.”

In the past, empires rose and fell on their military capacity to subdue independent nations and subvert the principles of personal liberty and national freedom. Today, nations face a more cultural form of imperialism, and the surrender of our nationhood appears to be coming from within ourselves and our societies.

Since the 1960s, sovereign nations have come under increasing pressure to cede political and economic decision-making to international organizations like the U.N. and the EU. Enormous power has been acquired by a dominant extra-national, technical-administrative class dedicated to a post-national, progressive world order that ensures the regulation of a global economy, the homogenization of tastes, and guaranteed educational advantages for the prodigy of permanent bureaucracies.

The new liberal-progressive imperialism has challenged just about every institution in the old nationalist order, from morality and patriotism to historical heroes and founding fathers. The dominant international set rewards the rich and the poor at the expense of the middle. In the new global order, an elite 20 percent patronizes the bottom 30 percent while the middle 50 percent pays the bills.

Today, Hazony says, we live in a world in which academics assert that “nationalism caused two world wars and the holocaust.” In progressive classrooms around the world, Trump’s MAGA movement is regularly compared to Adolf Hitler and the Nazi Party because both attracted large patriotic crowds to political rallies. This is like arguing that a man who pushes a pedestrian out of the way of an oncoming bus and a homicidal maniac who pushes someone into the path of the vehicle are both just guys who like to push people around.

We have heard plenty of spurious allegations about nationalism from the post-modern left. But it is important to recall that, throughout history, arrogant imperial ventures have devastated the lives of millions in independent city-states and free nations where citizens once enjoyed relative peace and prosperity.

The “progressive” zeitgeist that dominates our permanent managerial class is the latest iteration of the imperial impulse. It seeks to break down the familial bonds of trust and mutual loyalty that develop among diverse citizens in independent nations, replacing them with the universal culture of what the late David Riesman called an “other-directed” planetary “lonely crowd.” Globalist intellectuals cry tears for the world but seldom have much regard for their next-door neighbours.

As we near the end of the second decade of the 21st century, the courageous citizens of Hong Kong are desperately resisting dominance by the imperial communist regime in Beijing. And U.S. President Donald Trump is continuing to resist those who seek to discredit American nationalism and end his presidency through extra-democratic means.

Whither the course of Canadian nationhood? We will just have to wait and see.

William Brooks is a Montreal writer and educator. He currently serves as editor of “The Civil Conversation” for Canada’s Civitas Society.