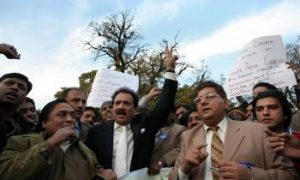 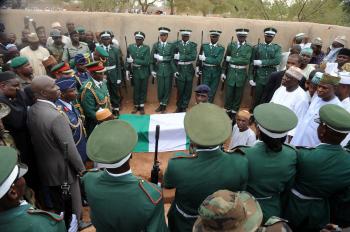 By Ian Ritz
Print
Umaru Musa Yar'Adua passed away on Wednesday, and today thousands attended Yar'Adua's funeral alongside Nigeria's new President, Goodluck Jonathan being sworn in. Yar'Adua had lost a long battle with with heart disease.

Goodluck Jonathan was officially sworn in as president after three months of standing in for Yar'Adua.
The large funeral ceremony was held near the deceased president's home in Katsina. Prayers were said as the president’s body was laid to rest in a cemetery nearby.

Many Nigerian government officials shown their respects at the funeral, including Nigerian Senate President David Mark.

“The nation has lost an honest leader that meant well for all Nigerians. His record of prudence and administrative excellence both as a state governor and president will remain evergreen in our memories,” Mark told Reuters.

Yar'Adua had been receiving medical treatment in Saudi Arabia for three months but covertly returned to Nigeria under tight security in February. A long standing heart condition known as pericarditis was behind the leader’s protracted health problems and eventual death.

The president's ailing health had been largely concealed and his absence caused a political vacuum that some feared could see a return to the country's more turbulent past.

In the absence of Umaru Yar’Adua, the acting president Goodluck Jonathan was given full presidential powers on Feb. 9 and has been in charge since then. On Thursday, he was sworn in as head of state and he will complete the presidential term until the elections in 2011.

President Obama on Wednesday made a statement at the White House expressing his condolences to the people of Nigeria and Yar'Adua’s family:

“We are saddened by the news of Nigerian President Umaru Yar’Adua’s passing, and our thoughts and prayers are with the Yar’Adua family and the people of Nigeria as they mourn his loss. Tonight, we remember and honor President Yar’Adua’s profound personal decency and integrity, his deep commitment to public service, and his passionate belief in the vast potential and bright future of Nigeria’s 150 million people,” said President Obama.

President Umaru Yar'Adua, a former university chemistry professor, was a West African native who was elected as the 13th head of state in Nigeria in 2007.

The election surrounding his presidency was somewhat controversial due to the corruption of past leaders and the sordid economic nature of Nigeria at that time, reported the AfricaNews service. Umaru Yar'Adua was married and had nine children.