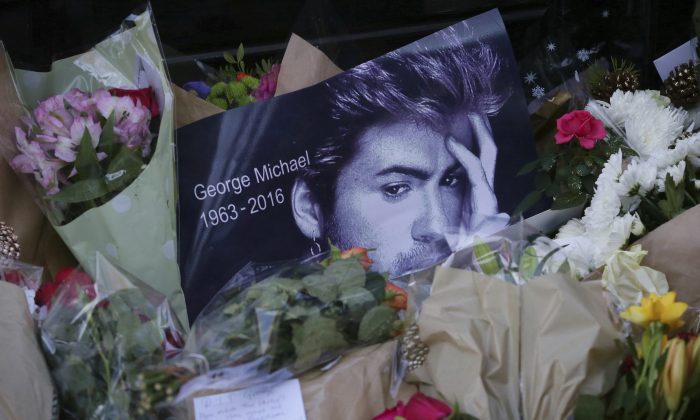 This Dec. 26, 2016 file photo shows tributes left outside the home of British musician George Michael in London. Michael, who rocketed to stardom with WHAM! and went on to enjoy a long and celebrated solo career lined with controversies, has died. He was 53. With the loss of several icons of Generation X’s youth, the year 2016 has left the generation born between the early 1960s and the early 1980s, wallowing in memories and contemplating its own mortality. (AP Photo/Tim Ireland)
Entertainment

With the Loss of Its Celebrities, Gen X Ponders Mortality

Princess Leia was our first girl movie heroine, and we made our moms braid brunette yarn so we’d have earmuff buns for Halloween. Carol Brady of “The Brady Bunch” was the ideal mother we probably didn’t have, because our moms had to work and left us latchkey kids home alone, with TV and processed food our only companions.

Carrie Fisher and Florence Henderson—and other icons of Generation X’s youth—are now gone, stolen by the cruel thief that is 2016. The year has left the generation born between the mid-1960s and the early 1980s wallowing in memories and contemplating its own mortality.

“It’s a very melancholy time,” sighed Shelly Ransom, a 47-year-old speech-language pathologist in Darien, Connecticut. “This is really bringing back a lot of teen angsty feelings. These people are supposed to still be the voices of my generation. It’s sad to see these artists not there to be our voice.”

Or, as weary, 51-year-old Lawrence Feeney, a filmmaker from New Port Richey, Florida, put it: “You lose George Michael and Carrie Fisher in a three-day span, you feel like you’ve gotten a couple of daggers thrown at you.”

Throughout the year, office conversations, dinner party discussions and social media have exploded with incredulity, sadness and fear, as one ’80s celebrity after another died, starting in January with David Bowie.

The feelings have been particularly acute for Gen X, whose members came of age when many of these cultural figures were popular.

We adored Bowie in the movie “Labyrinth” and danced to “Modern Love” at prom. We remember reading the words “Purple Rain” on the theater marquee and wondered why that little guy in high heels was so sexy. We made out fervently in cars in high school as George Michael crooned on the FM dial (Remember radio? It came decades before Spotify, and you couldn’t pick your music).

“We were the generation that was going to change the world. When I was a young man, I watched people my age stand in front of tanks in Tiananmen Square and tear down the Berlin Wall. Now I find myself complaining about arthritis in my hands and taking care of my aging parents,” lamented Rob Withrow, a 43-year-old landscape business owner in Palm Bay, Florida.

He added: “The musicians I admired growing up are now dying off. Hopefully, I still have quite a few more decades left in me, but the reality of dying is much clearer to see.”

Of course, this happens to every generation: Our idols die off, and we suddenly feel our youth slipping away.

But Lou Manza, a professor of psychology at Lebanon Valley College in Annville, Pennsylvania, said baby boomers and older generations weren’t as invested in or connected to their celebrities. Gen X had MTV, which put pop stars like Prince and Bowie into our homes in heavy rotation.

That, combined with the immediacy and intimacy of 21st-century social media—we knew when platinum-haired punk rocker Billy Idol turned 61 because Facebook informed us, for instance—amplifies the sadness.

“Our parents in the ’70s would hear about a celebrity death on the nightly news, or the next day in the newspaper,” Manza said. “Now, there’s more and more of an immediacy with every successive generation.”

“We’ve never met these people. Yet we’re all so affected by it,” she said. “Being a shared grief both makes it bigger and easier.”

For some, the death of beloved childhood figures reminds us of the passing of people closer to us and of the march of time, which seems more like a fast jog.

“We’re at the age now when we really start to see ourselves in our parents. My son just turned 10, and it occurred to me as he hung out with my parents that it’s really not going to be too many more years before my husband and I are my parents, and he is us,” said Amanda Forman, a 38-year-old mother of three and a writer from Flourtown, Pennsylvania.