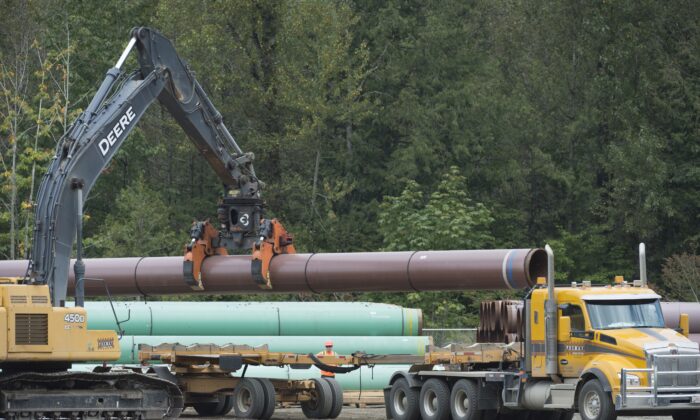 Pipes are unloaded at a Trans Mountain facility near Hope, B.C., on Aug. 22, 2019. (The Canadian Press/Jonathan Hayward)
Canada

With Teck’s Oilsands Mine Scrapped, TMX Next Target of Anti-Pipeline Activists, Says Expert

The Alberta government may have won its constitutional challenge against the federal carbon tax at the Alberta Court of Appeal this week, but it was a pyrrhic victory for the province’s embattled energy sector after Teck Resources shelved its $20 billion oilsands mine.

Some now fear the Trans Mountain Expansion Project (TMX) could suffer the same fate as Teck’s Frontier mine.

Bill Gallagher, a regulatory lawyer who’s worked in government and industry and authored two books on the intersection between resource interests in Canada and Indigenous rights, believes those involved in the rail blockades are ultimately set on killing the Trans Mountain pipeline expansion.

“It’s not Coastal GasLink that’s imperiled. TMX is the target and has been all along, and the prime minister needs to head that off,” said Gallagher of the project Prime Minister Justin Trudeau’s Liberal government nationalized nearly two years ago.

“Trudeau needs to step up to show how his pipeline, the one that he owns, can demonstrate a new relationship with [Indigenous people] on pipeline infrastructure. He has nothing to lose in doing this since TMX is a sitting duck in the current charged environment.”

After getting elected in 2015, the Liberals made fighting climate change and Indigenous reconciliation centrepieces of their government. Activists and some Indigenous leaders have since conflated climate change and Indigenous rights. Most recently, two dissenting Wet’suwet’en hereditary chiefs sued Ottawa over failing to quash projects like Coastal GasLink, which they argue run contrary to meeting Canada’s commitments to reduce CO2 emissions under the Paris Agreement.

The Coastal GasLink pipeline is supported by five of six elected Wet’suwet’en band councils, which are among the 20 elected First Nation band councils along the pipeline’s route that have successfully negotiated agreements with the company on the project. The project is opposed by some of the Wet’suwet’en hereditary chiefs.

“Trudeau has treated these current protests against Coastal GasLink as a denial of rights and lands issue, and of course that’s not what it is,” Gallagher said.

“It’s a rule-of-law issue, and he’s only going down this road because he too owns a pipeline and wants to avoid getting into pipeline politics, especially with these [Indigenous] activists and their anti-energy supporters.”

Metis leader Ron Quintal, president of the Fort McKay Metis Community Association—one of 14 Indigenous groups that backed Teck’s Frontier mine—says Trudeau should seize upon TMX to show Canadians there is unity among Indigenous groups to leverage resources on the road to reconciliation.

“As for the environment, one of the biggest reasons we worked with Teck and it got the endorsement of 14 communities was that climate change was a major part of the conversation.”

Like the Liberals’ stated goal of making Canada a net-zero carbon emitter by 2050, Teck Resources established similar corporate objectives across its array of mining interests that include copper, lead, and zinc.

The company also boasts technology at its Alberta Foothills oilsands mining and processing location that achieves “a lower carbon intensity than approximately half the oil currently refined in the U.S.,” according to its website.

Quintal is also president of Edmonton-based Iron Coalition, which is one of three Indigenous consortiums, along with B.C.-based Western Indigenous Pipeline Group and Calgary-based Project Reconciliation, that want an equity piece of TMX.

“The Trudeau government, unlike any other, has put forward reconciliation as a major plank, so now is the time to have a serious conversation about that within the federation and in the greater context of Indigenous people,” he said.

“There’s a real opportunity here for not just Alberta but for Canada to get this right, and in the spirit of reconciliation we are fighting like dogs to get our communities out of poverty. … Meanwhile, the federal government has given protesters so much attention, while we have communities working within the rule of law, reaching agreements with industry and government.”

From Gallagher’s vantage point, the only way for TMX and other similar projects to succeed is for industry and the federal government to meet Indigenous communities on their turf to cut a deal, not the other way around.

“Ottawa is not the place to go to get any of these problems solved. Ottawa can only respond to grievances,” he said.

Quintal, who has written a letter to Trudeau and Kenney, said he’s “absolutely prepared to be a mediator between governments so we can find a better path forward—and not just about Teck, but on any future investment in this region.”

“I believe you cannot be held hostage by a small group of people, whether it be Indigenous or otherwise, and the biggest issue is the protests aren’t truly reflective of the Indigenous communities’ wishes,” he said.

“The Indigenous communities want and need these things, and it’s been politicized by the environmental groups coming in here and funding these fights that have no real play in the matter.”

Teck Frontier is the latest in a series of abandoned resource projects that environmental activists cheer while other mothballed projects in addition to resource capital flight have wracked Canada’s energy sector since Trudeau took power.

As protests against Coastal GasLink continue and with TMX possibly in the activists’ crosshairs, Quintal is beating the drum for a different outcome.