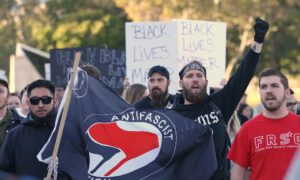 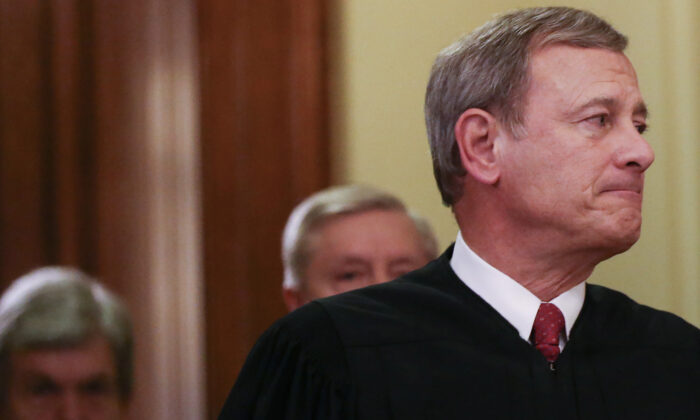 The U.S. Supreme Court’s appalling decision not to hear a Republican challenge to Pennsylvania’s extra-legal changing of election laws shortly before the 2020 vote—which likely delivered the state to Joe Biden in the wee hours of election night—is just the latest disgrace of the John Roberts court, and a clear signal of future trouble for the Republic.

Pusillanimity has marked the chief justice and the institution he leads since his volte-face regarding the 2012 Obamacare decision, in which he saved the misbegotten, intrusive, and blatantly unconstitutional law at the last minute by choosing to call the “individual mandate” a tax—that is to say, a hitherto unprecedented ukase by the federal government that once-free citizens had to buy a health care policy under threat of IRS penalty.

A human weathervane, Roberts has gone on from that low point to plumb ever-new depths of moral cowardice as, increasingly, he sides with court’s dwindling liberal bloc to become, in effect, the new Anthony Kennedy—the regal one-man swing vote on matters of urgent national importance. For as long as he is on the court, which is to say for life, Roberts will be the lasting unfortunate legacy of the George W. Bush administration—even more damaging than Daddy’s Revenge (Iraq  2001), the Forever War in Afghanistan, now in its 20th year, and 9/11 itself.

Buildings can be rebuilt. Troops can and ought to be called home, especially when they are dying for nothing. But the Constitution, once shredded, is not so easily repaired.

The Feb. 22 non-decision to turn away a case involving “absentee” ballots that arrived up to three days after the November election as “moot,” was, in fact, a decision in itself, indeed the Catch-22 of Robertsian jurisprudence.

The high court had shunted aside the case (in a 4–4 decision with Roberts siding with the liberals and Amy Coney Barrett not yet confirmed) in October 2020, in effect inviting the plaintiffs to return after the voting to show injury, if any. Heads, Democrats win; tails, Republicans lose. After all, Trump finally conceded, didn’t he, so what’s the problem? Case closed.

Heading into the election following the death of Justice Ruth Bader Ginsburg, conservatives liked to think that with the appointment of Barrett, the ideological split would be 6-3. And, in fact, in this case, they were right. All three dissenters were conservative: Clarence Thomas, Samuel Alito, and Neil Gorsuch. The other six, including Roberts, were silent.

“The Pennsylvania Legislature established an unambiguous deadline for receiving mail-in ballots: 8 p.m. on election day,” Thomas wrote in his dissent. “Dissatisfied, the Pennsylvania Supreme Court extended that deadline by three days. The court also ordered officials to count ballots received by the new deadline even if there was no evidence—such as a postmark—that the ballots were mailed by election day. … These cases provide us with an ideal opportunity to address just what authority nonlegislative officials have to set election rules, and to do so well before the next election cycle. The refusal to do so is inexplicable.”

Maybe not. What we’ve learned from Roberts is that he’s susceptible to pressure and hates conflict.

In one of the most disgraceful episodes in the court’s history, Sen. Chuck Schumer (D-N.Y.), losing his cool over abortion “rights” on the steps of the Supreme Court, directly threatened Roberts’s colleagues Neil Gorsuch and Brett Kavanaugh.

Roberts’s milquetoast reaction? “Justices know that criticism comes with the territory, but threatening statements of this sort from the highest levels of government are not only inappropriate, they are dangerous. All Members of the Court will continue to do their job, without fear or favor, from whatever quarter.”

Still, Schumer’s message came through loud and clear: Vote our way or face the packing of the nation’s highest court with a fistful of new justices. With the election of Biden last fall, that prospect is now within reach. Elections really do have consequences.

And now here they are; two of the three judges Trump appointed to the Supreme Court have stood idly by while the Constitution’s directives for election law just got shredded. Perhaps not surprising: Kavanaugh’s tearing up during his nasty confirmation was embarrassing, and nothing he’s done since has indicated any desire for quiet payback. And so far, Barrett has been a cipher.

To be clear, accepting this case wouldn’t have meant overturning the election. At this point, the vote challenges wouldn’t make any difference to the outcome. But it’s the principle of the thing. If six justices are utterly uninterested in discovering whether our electoral system has now been corrupted beyond repair, we are in more trouble than we thought.

So let’s cut to the chase: There was no Kraken, no Plan, no deus ex machina. Former Vice President Mike Pence couldn’t have voided the certified results of the election, however hinkily obtained. Republican senators were perfectly within their rights to question the results, and Pence might have sought to broker a compromise on Jan. 6 in which serious allegations of fraud might have been examined. But Pence had neither the political talent nor the temperament for such a task—even with the precedent-setting example of 1876 right in front of his nose.

In any case, handing the likes of Schumer and his cronies in the media the propaganda victory of the breach of Capitol Hill by hundreds of protesters—a blunder of epic proportions—ended any further maneuvering.

So now, the court sits in a Washington ringed by razor wire and occupied by armed troops while a bumbling old man plays video games with his granddaughter at Camp David and a woman raised in Canada of two foreign-born parents makes international phone calls to heads of state in Europe and elsewhere.

Let’s face facts: What got us here wasn’t theft and media malfeasance; those were just the symptoms of a Democrat-induced malignancy that leveraged the absurd panic over COVID-19 into a free-for-all election in which you could vote without ID, vote months ahead of the election, vote days after the election, “cure” your ballot if you made a “mistake,” allow a complete stranger to “harvest” your vote, and never have to prove provenance. One more election under these rules and the Republic is dead.

Cut to the chase: The only way this can be rectified is by a restoration of our traditional system of voting: one man, one vote, one time, on one day, certified by positive identification at a designated polling place, within an ironclad time period. Ignore the bleating about the disparate impact on minorities, bogus civil rights issues, or the racist allegations that blacks and Hispanics are often incapable of using common technology to be fully informed citizens.