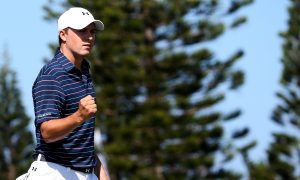 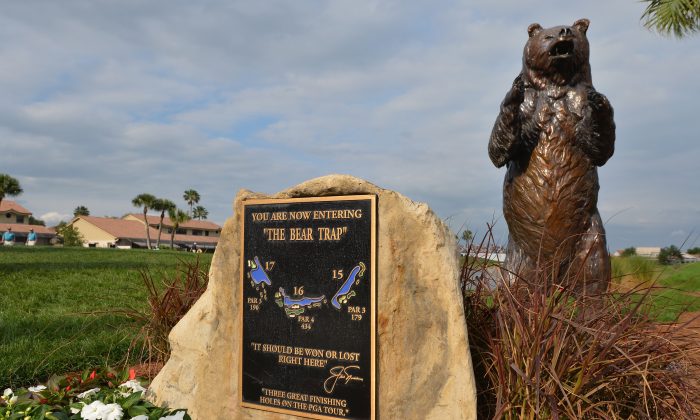 A sign displays the Bear Trap during the first round of The Honda Classic at PGA National Resort and Spa. (Stuart Franklin/Getty Images)
Golf

PALM BEACH GARDENS, FL.—There’s nothing more humbling for a PGA Tour player than to be exposed on national television and have their respective golf game shredded with no place to hide. After having been in California the last two weeks, the PGA Tour begins its four-week Florida swing with the Honda Classic at PGA National Golf Club’s Champion Course.

All of the competitors are fully cognizant of a three-hole stretch—affectionately named The Bear Trap—consisting of holes 15–17. In 1990, Hall-of-Famer and course designer Jack Nicklaus redesigned the layout and completely altered a trio of holes that stands in a league of its own for overall challenge. Since 2007, only three other trio of consecutive holes on the PGA Tour rates higher on stroke average than ones found at the Champion Course.

How tough is it?

Amazingly, the long par-4 14th which precedes the start of the Bear Trap and the par-5 closing 18th are also demanding in their own right. In short, there’s no real reprieve as players are attempting to snare a trophy that often results in what golfer is the last to stand tall and most importantly—dry.

Water is often a common element in much of golf design in Florida and The Champion Course certainly makes use of it at key points. However, it is the knowledge that the Bear Trap lurks is what causes white-knuckle times when finally coming to that point in any round.

The 15th is not an overly long par-3 at 179 yards but often players will encounter a demanding crosswind from the left which can easily push less-than-certain shots to the right where a pond sits menacingly. For those players who seek to avoid the water there are bunkers strategically placed on the left side of the green that are no less frightening because of the fact that a too aggressive play can mean hitting the water with one’s second shot. Taking dead aim at such a target demands utter precision.

“There are no bailouts—you have to commit to the shot,” says former world-number-one player Tiger Woods. Nicklaus adds, “15 was a little benign par 3 before we did it. There was not much there. The water was in play. It was sort of a nothing little hole, and when we brought the water in play, all of a sudden it became a monster and it’s only a monster because of the awkward wind there.”

No player has aced the hole during competition, the closest coming is when Mark Wilson hit his approach to 4-inches.

The par-4 16th is a dog-leg right with sufficient landing area but then tightens up the deeper one plays down the fairway. Most players will forego hitting driver and attempt to get to the fairway with either a long iron or fairway metal. Two bunkers are in the drive zone and it’s critical to miss either of them—leaving roughly 150-180 yards on the approach.

The 16th isn’t anything all that unusual. It’s not much of a tee shot. And the water really is not in play on that hole very much. I could have put the water in play there if I wanted to, but I felt like with 15 and 17, I didn’t think that they needed it that much in play on the second shot, felt like it needed to come out,” said Nicklaus. “It’s always a good, strong hole. But the wind conditions always make it so because if you miss the fairway the second shot becomes very awkward.”

Rory McIlroy, the 2012 winner and number three player in the world said, “At 16, if you get your drive away, is OK. But obviously missing it right isn’t very good.” Amazingly, five players have four-putted the green since 2007—the most of any putting surface at The Champion Course.

The penultimate hole at The Champion presents a series of clear hurdles. Water is clearly the main obstacle as it requires a forced carry and also stretches down the right side. Pin placements can be equally demanding—whether upfront or placed as close as possible on the right side. Wind conditions can vary and often players will be sure to hit sufficient club but the slightest pull results in finding sand to the left of the green.

Just a hard hole to get close to the pin with such at stake during the end of any event. “On Sunday when the pin is in the back right on No. 17, this is the hardest hole we play on tour,” says Robert Allenby.

No lead is ever safe for any competitor entering the Bear Trap and players fully realize major swings can easily happen with players taking advantage of the opportunity and others succumbing to it.

“I don’t care if they make golf balls that go for a thousand yards. The Bear Trap will stand the test no matter what the equipment is,” says Nicklaus. With a quality field set to start the event today it will be fascinating to see what players can tip-toe their way around one of golf’s most perilous stretches of holes.