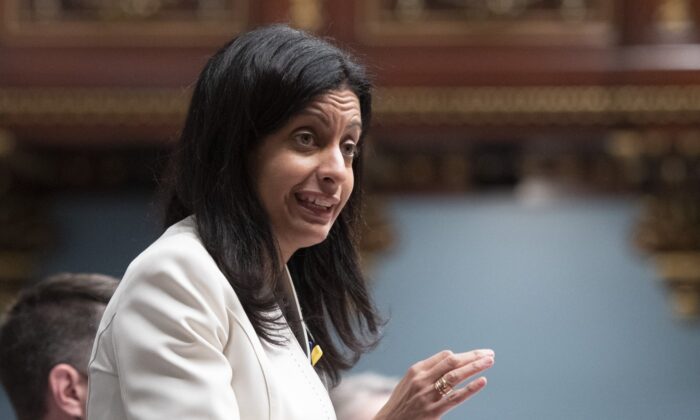 With Sovereignty Off the Table, Quebec Liberals Struggling to Connect With Voters

Quebec’s next provincial election is still more than five months away, but Liberal Leader Dominique Anglade is already on the campaign trail.

On Thursday, the official Opposition leader was in Trois-Rivières, Que., a city of 140,000 people halfway between Montreal and Quebec City, promising more political power for the regions—a term often used in Quebec to describe rural and less-populated parts of the province.

The Liberals aren’t doing well in the regions, which are mostly francophone. Last general election, in 2018, the party won four seats outside the greater Montreal area, where its base of anglophone and immigrant voters resides. Since then, the Liberals lost two of those four seats in byelections.

With the spectre of a Quebec independence referendum off the table, the Liberal party is attempting to redefine itself, but it’s struggling to appeal to French-speaking voters without losing support among anglophones and immigrants.

“There’s been a change in Quebec’s political landscape,” Valérie-Anne Mahéo, a political science professor at Université Laval, said in a recent interview.

“We’ve seen a shift from partisan politics that were organized around sovereigntism and federalism, toward more so-called normal politics, on a left-right axis, where we see parties competing on social and economic policies.”

The shift has been difficult for the federalist Liberals and the sovereigntist Parti Québécois—the two parties that dominated provincial politics for more than 40 years—because the issue of Quebec’s place in Canada was such a key part of their identities, Mahéo said.

While the Liberals were traditionally seen as the party of the economy, the centre-right Coalition Avenir Québec, which took power for the first time in 2018, now occupies that position in the minds of many Quebecers, she said.

Premier François Legault, a self-described nationalist leader who campaigned for a strong Quebec within Canada, remains atop the polls. A Léger poll released the same day Anglade was in Trois-Rivières put Legault’s party at 44 percent support. The Liberals, meanwhile, polled at 17 percent, down one percentage point from Léger’s March survey and down around eight points from the 2018 election, when they elected 31 members in Quebec’s 125-seat legislature.

While the party remains in second place across the province, the Léger poll put them fourth in the Quebec City region and tied for third outside Quebec’s two largest cities.

Philippe J. Fournier, creator of poll-aggregating website QC125, said the Liberals came second in many ridings across the province in 2018, but he said that’s unlikely to happen in the October general election.

“They do have a base of Liberal voters pretty much everywhere in the province, but in the polls that we have—the local polls in Saguenay—Lac-St-Jean, Abitibi and the Eastern Townships—we see that has completely evaporated,” he said in a recent interview.

Among Quebec’s francophone majority, the Liberals were tied for fourth at 11 percent, according to Léger, behind left-wing party Québec solidaire and the Conservative Party of Quebec, which has never elected a member to the legislature.

Some Liberals, however, would like to see the party occupy some of the nationalist territory claimed by the CAQ, in order to win votes outside multicultural Montreal.

Benoît Pelletier, a member of the Quebec legislature from 1998 to 2008 and a cabinet minister in the Liberal government of ex-premier Jean Charest, says the party is neglecting identity issues and needs to redefine its relationship with Quebecers—particularly the francophone majority.

Anglade’s Liberals, he said in a recent interview, should advocate more strongly for the protection and promotion of Quebec’s language and culture. One example of the party being too soft on identity questions, he said, is its unclear stance on a bill to reform the province’s strict language laws.

The Liberals recently introduced an amendment to Bill 96 that would force anglophones in English junior colleges to take three “core” courses in French—only to ask for it to be withdrawn following outcry from colleges and the party’s English-speaking base.

That episode reflected the tension inherent in the Liberals’ identity struggles: it showed the difficulty they are having trying to widen their appeal to francophones without alienating their anglophone and immigrant base.

Meanwhile, there are signs of unrest in the province’s English-speaking community.

On Wednesday, failed Montreal mayoral candidate Balarama Holness said he is launching a new party to advocate for ethnic and linguistic minorities in the province—a direct assault on the Liberals’ Montreal-area strongholds. Another group has stated they were considering launching a party that would advocate for the province’s anglophones.

It’s unlikely those new parties will do well, Fournier said, but they could help the CAQ beat the Liberals in some close ridings.

Anglade said she’s not worried about new parties. The problem, she said, isn’t her party’s message—it’s that people haven’t heard it.