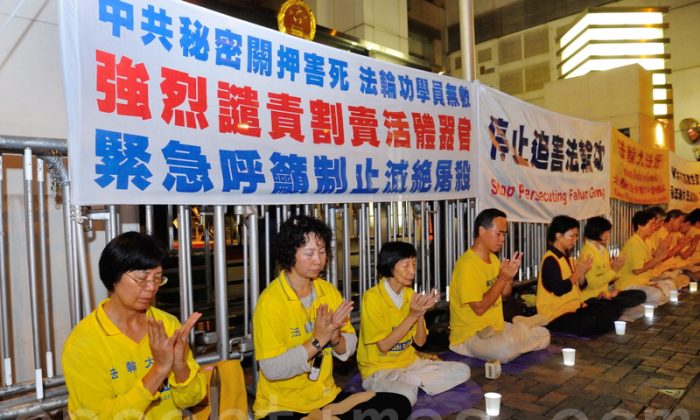 Falun Gongpractitioners on July 20 in Hong Kong held an event marking the 14th year of the persecution of Falun Gong, outside the Liaison Office. (Song Xianglong/Epoch Times)
China

With Screams and Taunts, Front Group Disrupts a Solemn Vigil

While practitioners of Falun Gong, a spiritual discipline, sat in silent poise at their candlelight vigil in Hong Kong on July 20, members of the Hong Kong Youth Association, a front group associated with an extralegal security agency run by the Chinese Communist Party, attempted to sabotage the event by screaming insults and fighting with police.

This year marks the 14th anniversary of the persecution of the practice; practitioners in Hong Kong held their vigil at the front entrance of the Liaison Officer of the Central People’s Government—the Communist Party’s office in Hong Kong—and at the back door.

Shouting slanderous retorts, the Hong Kong Youth Care Association (HKYCA) crowded the sides of the practitioners who were sitting in meditation, while police attempted to block them off by forming a human barricade. HKYCA had failed to submit an application for their protest, police said.

Ten members of HKYCA, holding up defamatory banners, tried to shove their way through police officers. When this approach did not stop the Falun Gong practitioners’ rally, HKYCA members began to block traffic lanes and threaten policemen.

During the incident, a man with suspected ties to the HKYCA and also a general manager of a brewery, Hong Weicheng, monitored the event and gave out orders.

“It was like we were back in the Chinese Cultural Revolution, except back then, both parties would be screaming at each other. Now, at the site, it’s only the HKYCA shouting crazily and defaming us. We stayed put and just quietly sat here,” said one of the Falun Gong practitioners, Liu Ding, who is in her 60s and hails from Beijing.

“It’s truly not easy for me to come here today,” said Fu Xueying, a Falun Gong practitioner who had been jailed in Shenzhen Prison for three years, “However, suppression is everywhere and has spread to Hong Kong.”

“They tried to disrupt a Falun Gong vigil. I’ve never seen anything like this. There is freedom of speech in Hong Kong. You can’t just harass people like that. It’s terrifying,” said Lei Yulian, who witnessed HKYCA members’ brawl with police officers.

After noticing that the only media present at the scene was Epoch Times, Lei called reporters at other newspapers, but they told her that they had “orders from above” not to give Falun Gong any coverage. Even if the reporters interviewed people and recorded videos, whatever material they submitted would be kept from publication by “internal review,” Lei was told. Lei did not specify at which media the policy was practiced.

The HKYCA is known in Hong Kong as the group responsible for numerous banners hung in prominent public locations that slander Falun Gong (and which violate local laws, according to police). The group shares an office building and staff in Shenzhen with the 610 Office, a Party agency that oversees the persecution of Falun Gong in China, according to a Next Magazine report. HKYCA’s leader also has a number of official positions in the Chinese Communist Party.