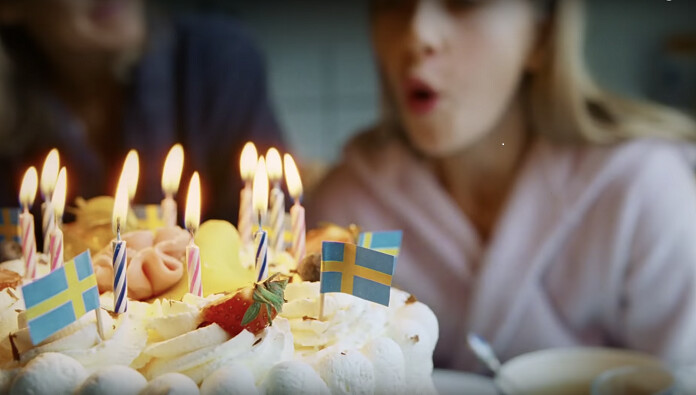 A commercial for Scandinavian Airlines (SAS) has caused an uproar on social media, causing thousands of Scandinavians to pledge never to fly with them again, and post photos of them cutting up their SAS cards.

A period piece of globalist anti-nation state talking points, the bizarre commercial delivers a message that “absolutely nothing” is inherently Scandinavian, and that everything we associate with Scandinavia, from windmills to meatballs, has in fact been stolen from other countries.

It’s such a dizzying display of inverted branding, Swedish-Hungarian PR man Peter Karaszi called it “the worst bellyflop I have seen in 40 years in the advertising business.”

“I am in a state of atomic shock,” said Soeren Espersen, a senior member of the populist Danish People’s Party, who vowed to compel Denmark’s transportation bureau to discipline the airline harshly.

He says the ad comes down to “spitting on all that is truly Norwegian, truly Swedish, and truly Danish.”

The commercial opens with classically Swedish images: Blond hair being braided, candles being blown out on the traditional birthday cake with Swedish flags, and a young woman’s voice asking bleakly:

“What is truly Scandinavian?”

Then the hammer blow, a second later, as the music stops: “Absolutely … nothing.”

The montage cuts to a sad child shrugging, then the word “nothing” in several languages, across more images of Scandinavian nature. Two spooky blond children speak in unison: “There is no … such … thing.” A dark-haired youth looks at the camera accusingly.

“Everything,” the voice continues, “is copied.”

“Our democracy?” the voice asks, as the camera pans over mass-produced Greek statues. “Credit goes to Greece.”

“Parental leave?” A man carrying a baby in a sling whispers, “Thank you, Switzerland.”

It goes on, relentlessly: Windmills were invented in Persia, bicycles stolen from Germany, dark bread is Turkish, licorice is Chinese. A Swedish woman calls out hope for the Midsummer Maypole, only to be told, “It’s German.”

A young woman looks truly bereft as she warns us, “It gets worse.”

The pace slows down for the central kill. “Rumor has it that the oh-so-Swedish meatballs might not be as Swedish as you think … but Turkish.” An audible gasp.

An Asian man in pink hair tells us: “Even the Danish isn’t Danish. It’s Austrian.” On to, the “pride of Norway,” the paper clip, was “actually invented by an American.”

Suddenly, amidst grainy footage of suffragette protests, America (not Sweden) is thanked for spearheading the women’s rights movement.

And then the camera pans to a boy of African descent saying: “We’re no better than our Viking ancestors. We take everything we like on our trips abroad, adjust it a little bit and … voila.”

The bizarre video was met with such fury, promises of widespread boycotts, and tens of thousands of thumbs down on YouTube, that SAS took it down the same day.

But that brought new backlashes. Mainstream (globalist hardline) Swedish media ran editorials attacking SAS for caving in to “far-right” nationalists, so SAS put it back up, but closed the comments section.

It didn’t stop there. SAS soon put out a statement claiming that Russia was behind the opposition to the commercial, on grounds a negative article about it was published by Sputnik, and published an internet data map from the app Hoaxy, claiming to show that the story went viral thanks to incitement from Russian trolls.

A defensive and even paranoid statement from SAS read: “SAS is a Scandinavian airline that brings travelers to, from, and within Scandinavia. … When analyzing the pattern and volume of reactions we have reason to suspect an online attack and that the campaign has been hijacked. We do not want to risk being a platform for views that we do not share. We have therefore temporarily removed the film from our channels and we are currently evaluating the next step.”

Peter Karaszi, a lone voice of reason, in his blistering editorial in Sweden’s Expressen, called it “a kind of anti-advertisement for Scandinavia.”

“Let’s establish,” he wrote, “that the commercial is extremely bad. Pompous, haughty, and condescending.”

He points out that the comments were 98 percent negative, and that SAS’s crisis response made things even worse. He would, he writes, have advised them not to argue or defend themselves, but instead just “crawl under the covers and close their eyes until the nightmare is over.”

“How could things go so wrong?” Karaszi wondered. “At least 50 people, probably more, were involved in the production of the film. Did they really have no target group …  they could have tested the film on before they released it?” He accuses the creators of existing inside such an insulating “bubble” that they “in all seriousness believed they were doing the right thing.”

The infamous toxic masculinity pre-Superbowl Gillette commercial is the American forerunner to the SAS ad. The strange quality both share is the sense of weaponizing the “product” against the very people it would normally seek to seduce. Are commercials becoming vehicles that attack their customers, in the age of woke?

SAS has been the latest in a long line of globalist corporations, IKEA being another, that seems near-desperate to let the world know Sweden is a multicultural paradise now.

That what once looked like Sweden no longer looks like Sweden. That Sweden is no longer just a place full of ethnic Swedes. That meatballs are no longer a source of national pride, but rather pride is rooted in Sweden’s unique fanaticism around ethnic and sexual-political correctness.

And enough about the licorice, as much as I miss it. America doesn’t talk about its Twizzlers. However, I could talk your ear off about the superiority of the Swedish Stearin Candle manufactured by Liljeholmen.

None of this is what makes a nation.

The petty and materialistic Sweden branding of the 1960s and ’70s is precisely why the conversation about Sweden is so claustrophobic and controlling. There is so much that is fantastic about Scandinavia—its respect for nature, its literature, its decency, its industriousness.

The SAS commercial could have boasted that “Sweden was the first country to award the Nobel Prize in literature to a woman—Selma Lagerlof.”

Or “Pippi Longstocking’s creator Astrid Lindgren got animal rights—including windows and outdoor time—written into the constitution.”

The self-loathing SAS commercial appeared at the same time as reports in the Swedish news media about a new phenomenon of children committing crimes against children. (That means migrant children against Swedish children.)

An 18-year-old who went by “Liam” was getting off a train when he was attacked, robbed, taken to the woods, stripped naked, and had his head bashed. Hurling anti-Swedish profanities, his attackers even urinated in his mouth.

Is it felt that if Sweden attacks herself, she will be safer and less overtly despised by the immigrants who, for some reason, have been overcome by racial hatred of ethnic Sweden since the great wave of immigration began in 2014?

I sent the SAS ad to an old friend in Sweden, who asked to remain anonymous. “It makes me seriously sad,” he said. “How can they sink so low? I’ll never ever fly SAS again. But I’m not surprised—this kind of thing happens all the time. Slowly, the self-hatred eats its way into the civic-body. Sweden/Europe becomes like a human being with self-injury compulsions.”

There is also an explanation that is strictly economic and way more pedestrian. SAS has had to adapt to the crippling competition of the budget airline Norwegian (which proudly shared an image of a Norwegian-invented cheese slicer on its Facebook page, trolling SAS) by creating affordable subsidiary-airlines.

SAS pilots entered the heated debate on social media, critical of the commercial but casting new light on it, as a way to get customers used to changes ahead.

“With Irish planes, Spanish pilots and Baltic cabin staff, the ‘Scandinavian’ experience feels like it’s vanishing,” one wrote. “But the reactions from our customers shows that people value and care about the Scandinavian brand.”

One meme showed a bit of humor. A photo of an SAS plane in the air is captioned at the top, “There’s nothing good about Scandinavia.”

Then below the plane: “This plane is Scandinavian.”

Celia Farber is a Swedish-American writer with a background in magazine reportage and investigative reporting. She has written for Harper’s Magazine, Esquire, Rolling Stone, and many more, and is a contributor to The Epoch Times.