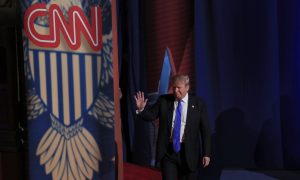 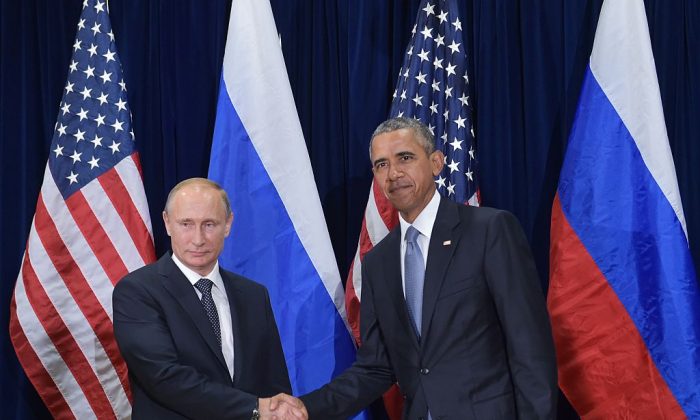 Former President Barack Obama and Russia's President Vladimir Putin shake hands while posing for a photo ahead of a bilateral meeting on the sidelines of the 70th session of the UN General Assembly at the United Nations headquarters in New York on Sept. 28, 2015. (MANDEL NGAN/AFP/Getty Images)
Politics

The narrative that Trump colluded with Russia to impact the 2016 presidential elections has unraveled. Now the focus is shifting to the Obama administration’s handling of the alleged Russian interference, and whether Clinton supporters helped spread false narratives that launched what President Donald Trump has called “the single greatest witch hunt of a politician in American history.”

The new controversy came to light on June 21, when former Secretary of Homeland Security Jeh Johnson testified before the House intelligence committee about Russian interference in the election.

Why did it take the administration so long to make a public statement that a foreign adversary was trying to influence the American election? The statement didn’t come until October.
— Adam Schiff (D-Calif.), ranking member, House intelligence committee

Johnson went over a few points that have become common in these hearings but often receive little media coverage. He stated that he knows of “no evidence” that votes were altered or suppressed; that he had seen no information, other than public reports, that Trump or his team played any role in the scandal; and that the Democratic National Committee (DNC) had not allowed the intelligence committee to investigate the alleged Russian breach of its networks.

But something new emerged this time. Media reports had said the Obama administration had known in August 2016 of Russian meddling. Adam Schiff, the ranking Democrat on the committee, asked Johnson: “Why did it take the administration so long to make a public statement that a foreign adversary was trying to influence the American election? The statement didn’t come until October.”

In other words, why did the Obama administration wait until October to make a statement?

Johnson responded that it was “a big decision” that had to be “carefully considered.” Part of this consideration, he said, was that Trump was suggesting at the time that the election could be rigged, so the Obama administration was “concerned that by making a statement, we might in and of itself be challenging the integrity of the election process.”

Instead of making the alleged threat to the election known, Obama did the opposite.

In response to Trump’s claims that votes could be rigged, Obama said, at an October 2016 press conference, “There is no serious person out there who would suggest somehow that you could even rig America’s elections, in part because they’re so decentralized, and the numbers of votes involved.”

“There’s no evidence that that has happened in the past or that there are instances in which that will happen this time,” Obama said. “And so, I’d advise Mr. Trump to stop whining and go try to make his case to get votes.”

Obama added, “I have never seen in my lifetime, or in modern political history, any presidential candidate trying to discredit the elections and the election process before votes have even taken place.”

Talk show host Mark Levin, author of the No. 1 Amazon bestseller “Rediscovering Americanism,” noted on his radio broadcast on June 21 that Obama’s handling of the alleged Russian breach appeared to have a partisan agenda.

According to Johnson, the Obama administration was concerned that making the Russian interference known would have fed Trump’s claims that the elections could be rigged. Levin noted that if this were the case and Hillary Clinton had won, concerns about a rigged election would have inhibited her victory.

“It’s not Trump colluding with the Russians,” he said. “It’s the Obama administration concealing what the Russians were doing so that Trump couldn’t use it against Hillary.”

Trump tweeted on June 22: “By the way, if Russia was working so hard on the 2016 Election, it all took place during the Obama Admin. Why didn’t they stop them?”

By the way, if Russia was working so hard on the 2016 Election, it all took place during the Obama Admin. Why didn’t they stop them?

The Washington Post then published an article on June 23 saying that the Obama administration had struggled with how to handle the Russian interference and had weighed several options for “deterring or punishing Russia.”

The story only fed the controversy over Obama’s handling of the information, however. The Hill reported on June 23 that even Democratic leaders were unhappy with Obama’s response, and quoted Rep. Eric Swalwell (D-Calif.) as stating: “It was inadequate. I think they could have done a better job informing the American people of the extent of the attack.”

And soon after, Democrats also began changing their line on the Russia investigation. The Hill reported on June 24 that “frustrated Democrats hoping to elevate their election fortunes have a resounding message for party leaders: Stop talking so much about Russia.”

The Russia investigation is also losing steam among voters, according to a Harvard-Harris poll released on June 23. It found that 64 percent of voters believed the investigations into Trump and Russia were hurting the country. Fifty-six percent said Congress and the media should move on to other issues, and 73 percent said they were concerned the Russia probes have caused Congress to lose focus on issues they care about.

Trump tweeted on Jun. 26, “The reason that Obama did nothing about Russia after being notified by the CIA of meddling is that he expected Clinton would win … and did not want to ‘rock the boat.'” Trump also said Obama either “colluded or obstructed” and it had done “no good” for Clinton and the Democrats.

Obama’s response to Russia was already known. As The New York Times reported on Dec. 16, 2016, Obama told Putin to “cut it out.” And according to NBC on Dec. 19, “Obama opted not to issue a warning that specific,” since he “didn’t want to inflame an already tense situation.”

Obama made his warning public just hours after Clinton had told donors in New York that Putin had orchestrated cyberattacks on her campaign and on DNC networks. While her claims have been widely reported, neither her campaign nor the DNC allowed federal agencies to access the allegedly hacked devices to verify what may have been done to them.

Then-FBI Director James Comey said in a March 20 hearing that the FBI “never got direct access to the machines themselves,” despite making repeated requests. Debbie Wasserman Schultz, former chair of the DNC, has contradicted Comey’s claims, saying the FBI never requested access to the devices.

The forensics that point to Russia are based solely on claims from CrowdStrike, a private company hired by the DNC. Notably, even CrowdStrike did not directly attribute the alleged cyberattacks. The Institute for Critical Infrastructure Technology, a cybersecurity think tank, noted in a blog post that “Crowdstrike does not directly attribute the incident to Russia, China, or to any other nation-state entity” and that the U.S. intelligence community has also “not collectively attributed the DNC breach” to Russia.

There are now additional allegations that a debunked dossier from a former British intelligence agent may tie back to a misinformation campaign linked to Clinton partisans.

The dossier filled with claims about alleged ties between Trump and Russia was spread throughout the media, U.S. intelligence agencies, and the U.S. government in August 2016. Its contents were debunked after Buzzfeed published it in January, and three owners of Russian banks named in the report have filed a defamation lawsuit against Buzzfeed.

The dossier was allegedly commissioned by Fusion GPS, a research firm that has numerous personal and financial ties to Clinton and other Democrats, according to the New York Post, which noted on June 24 that the Senate Judiciary Committee is threatening to subpoena the firm “after it refused to answer questions and provide records to the panel identifying who financed the error-ridden dossier, which was circulated during the election and has sparked much of the Russia scandal now engulfing the White House.”

It notes Fusion GPS “was on the payroll of an unidentified Democratic ally of Clinton when it hired a long-retired British spy to dig up dirt on Trump,” and that among its many ties, property records show that in June 2016, “Clinton allies bankrolled Fusion GPS.”

“These weren’t mercenaries or hired guns,” a congressional source familiar with the dossier probe told the New York Post. “These guys had a vested personal and ideological interest in smearing Trump and boosting Hillary’s chances of winning the White House.”

The dossier was reported by Buzzfeed immediately after a Senate intelligence committee hearing on Russian meddling in the 2016 election and just before Trump’s first news conference after he won the election, on Jan. 11. The reporting on the dossier put Trump on the defensive and provided grist for media reports attacking him.

At the press conference, Trump called the dossier “fake news” and later tweeted that CNN and Buzzfeed were “fake news organizations” for having reported allegations drawn from the dossier.