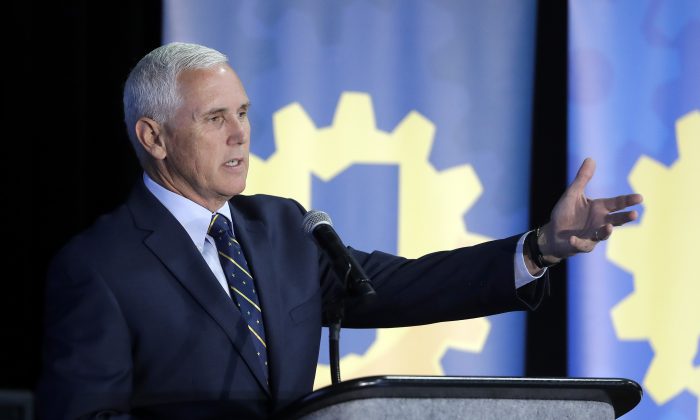 The presumptive GOP nominee had planned to introduce his running mate at a news conference Friday morning in New York, but said on Twitter Thursday evening that he would be postponing the event “in light of the horrible attack.”

During a day of rampant speculation, Indiana Gov. Mike Pence emerged as a late favorite for the job. Trump told Fox News he had not made his “final, final decision,” and his advisers cautioned that he could change his mind. The billionaire said his selection would “absolutely not” be changed by the France attack.

In the French resort city of Nice, a truck drove onto a sidewalk and plowed through a crowd of Bastille Day revelers who’d gathered to watch fireworks Thursday night.

After spending much of Thursday in Indianapolis, Pence flew to New York, according to a Republican familiar with the process. The person was not authorized to discuss the deliberations publicly and spoke on the condition of anonymity. Indianapolis television station WTHR posted a video showing Pence arriving Thursday evening at a private airport outside New York.

According to the Republican familiar with the process, the frenetic day was made more complicated by the fact that Trump was in California for a series of fundraisers, isolated from nearly all of his closest advisers, including his three adult children and his campaign chairman, Paul Manafort.

Frustration among Trump and his advisers mounted amid news reports that Pence was the pick, sending top aides scrambling to insist no final decision had been made.

Trump is now up against two clocks: The Republican convention kicks off in Cleveland on Monday, leaving little time for re-scheduling. Pence, who is running for re-election, faces a noon Friday deadline to withdraw from the race.

The paperwork has been drawn up for him to take that step, according to a Republican who was not authorized to publicly discuss the plans and insisted on anonymity. However, those documents have not been filed.

Jim Bopp, an influential conservative attorney who has previously advised Pence, said the delayed announcement “creates an enormous legal problem” for Pence, who is barred by Indiana law from seeking both offices. Bopp said that could mean Pence “has to make a decision without an official announcement.”

The convention and vice presidential announcement give Trump back-to-back opportunities to reassure Americans — as well as leaders within his own party — that he’s prepared for the presidency.

Top party officials are already in Cleveland, where a committee voted late Thursday to rebuff a push to let delegates vote for any presidential candidate they’d like. It was a major blow to Republican foes of Trump who have been working to try to thwart his nomination.

Pence, a staunch conservative who served six terms in Congress, is seen as a running mate who would have the backing of GOP leaders and ease some of their concerns about Trump’s political inexperience and volatile temperament. He has deep ties to evangelical Christians and other conservatives, particularly after signing a law last year that critics said would have allowed businesses to deny service to gay people for religious reasons. But the move alienated some moderates in the party.

Pence, 57, also has influential allies in Trump’s inner circle. But some of Trump’s children, who have been closely advising their father, are said to favor different candidates.