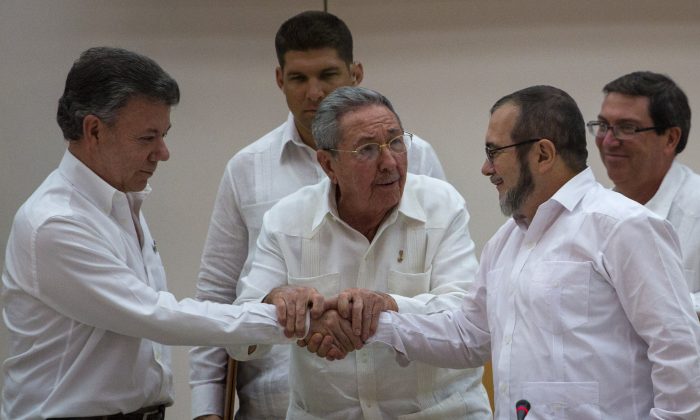 With Peace Near, Debate Grows Over Colombia’s Draft

SACHICA, Colombia—The army truck pulled up at 4 p.m. on a Sunday as Omar Rodríguez, in a baseball cap and torn jeans, walked to a bus stop in his rural village of tile-roofed white homes.

Soldiers demanded Rodríguez show his government military ID card. Because he never finished the military inscription process required of Colombia’s young men, he had nothing to show. He was hauled away to serve 1 1/2 years on the front lines of a conflict in which leftist rebels have sought to force a more equitable distribution of wealth, particularly in Colombia’s rural areas.

He did only eight months. On Oct. 25, shrapnel ripped into Rodríguez’s 18-year-old body as he and 11 other soldiers were killed in a rebel ambush. His relatives are angry and bitter. Rodríguez died in a uniform he never wanted to wear.

The rural poor “are the ones who suffer the consequences of a war those in the city don’t care about,” his brother Ricardo said.

Rodríguez’s mother, Alicia Pardo, drew journalists’ attention at her son’s funeral, which was held with full military honors and President Juan Manuel Santos in attendance. “They hauled him away without even giving him a chance to say anything,” she said.

Such stories are familiar to Colombia’s poor, whose young men have been forced to fight for a government they barely perceive in their daily lives.

While all Colombian men must register for the draft at age 18, it’s mostly poorer men who are compelled to serve in this nation of 46 million people.

While all Colombian men must register for the draft at age 18, it’s mostly poorer men who are compelled to serve in this nation of 46 million people. They can’t afford the escape route: Enrolling in college and paying a special sliding-scale tax of between $300 and $1,200. As a result, 90 percent of drafted youths come from the lower classes, the Colombian Collective of Conscientious Objectors said.

Now, as the government marches toward a historic peace agreement with Colombia’s main leftist insurgency, there is mounting national debate about whether the country still needs a big army—and conscription.

Many believe it fuels the inequality that is at the heart of a conflict that has lasted a half century.

The military dragnets that harvest new soldiers, of the type that snagged Rodríguez, have been declared illegal several times by Colombia’s justice system, most recently last month when the Supreme Court likened the practice to kidnapping.

But the roundups will likely continue as the armed forces struggle to fill the ranks of a military that now numbers 250,000, of which just 100,000 are professional soldiers. More than 25,000 soldiers have been killed in the Andean nation during the war, the army said.

The practice is apt to persist even if Santos meets a March deadline to sign a peace deal with the Revolutionary Armed Forces of Colombia, or FARC, which has about 7,000 combatants.

Gen. Jorge Eliecer Suárez, chief of recruitment for the army, said he agrees Colombia needs to have a military composed of people from all classes, not just the poor, but he added that soldiers will still be needed after the conflict ends.

Among six Latin American countries, including Brazil and Cuba, with a military draft, Colombia is the only one at war. Mexico doesn’t have a draft, but every college graduate must work a year providing a social service. One proposal in Colombia is that conscripts be permitted to avoid the conflict with alternative public work.

In Sachica, a sleepy town in central Colombia where there hasn’t been a murder in almost a decade, local youths said army trucks looking for new soldiers circle the town’s plaza every few weeks. This is where Rodriguez was taken.

“When they appear in town we all run away or hide so they don’t trap us,” said 18-year-old William Jerez, hanging out by a colonial church with three friends.

In his re-election campaign last year, Santos vowed that if a peace deal was struck he would eliminate the draft, saying it was unfair to the poor. He recently proposed legislation to eliminate the “military booklet” that young men must show employers to prove they have either served or paid the special tax. The measure would also raise pay for conscripts and exempt those over age 24 from service.

The proposed changes come too late for Jeferson Chayan, who was grabbed in a raid in southern Bogotá and sent to the volatile eastern state of Arauca.

“The hardest part was the training in lakes because I don’t even know how to swim,” he recalled.

Chayan lasted three months, deserting during his first leave. He now faces six months to a year in prison if convicted of desertion.

Unlike Chayan, Rodriguez had a job before he was conscripted.

He picked onions and tomatoes from dawn to dusk outside the simple zinc-roofed hut where he lived with his family. Inside the home, his photograph sits next to the bed he shared with a cousin.

He’s wearing the uniform he never wanted to put on.