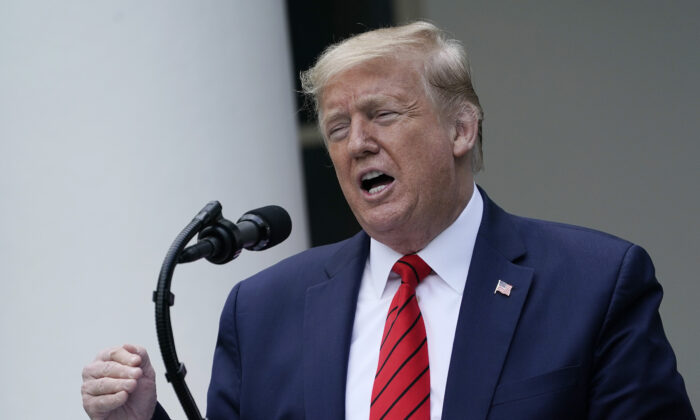 President Donald Trump speaks during a press briefing in the Rose Garden of the White House in Washington on May 11, 2020. (Drew Angerer/Getty Images)
By Bonnie Evans

The appointment of a new head at the agency charged with telling America’s story to the world may usher in reforms to the Voice of America’s troubled Chinese-language service, which has been accused of having been compromised by the Chinese Communist Party (CCP).

Two years later, Pack was confirmed on June 4 by a Senate vote of 53–38. The vote ran roughly along party lines, with only Joe Manchin (D-W.Va.), joining the Republican majority. His confirmation was fiercely opposed by Democrats, who fear that under Pack, the USAGM could become a propaganda outlet for the Trump administration.

Pack is a noted conservative who has served in a variety of public roles, including on the National Council of the Humanities, and as the top television executive at the Corporation for Public Broadcasting from 2003 to 2006. He’s known to be an ally of conservative activist and Trump’s former chief strategist, Steve Bannon.

Part of Pack’s mission will be to deal with allegations that the CCP has infiltrated and gained influence over VOA.

In its section on media, the report spells out Beijing’s success at compromising VOA’s Mandarin Service branch.

“Starting in the first decade of the 2000s, the Chinese embassy in Washington, D.C., and the leadership of VOA’s Mandarin service began an annual meeting to allow embassy officials to voice their opinions about VOA’s content. PRC embassy officials have also reached out to VOA hosts to convince them to be more supportive of the regime. VOA personalities have hosted events at the embassy. One of VOA’s TV editors even publicly pledged his allegiance to China at an embassy event.”

The report states, “In 2012, a Chinese immigrant, who was also a former Chinese dissident and a specialist on the U.S. political system, became the first female Chinese head of the service. She was later fired over a controversial interview that drew the official ire of the PRC, which threatened repercussions.”

The report claims that after her dismissal, “VOA’s Mandarin service has resumed a pattern of avoiding stories that could be perceived to be too tough on China, according to several staffers. For example, blogs written by dissidents such as Cao Yaxue, who runs the human rights-related http://chinachange.org site, have been removed from the VOA website.”

The report states that “several prominent Chinese commentators are no longer on VOA’s lineup of analysts.” In addition, VOA staffers say that the emphasis is now on “travel, culture, and language,” which viewers can find on homegrown media, as well.

The academic criticism in the Hoover report has found a champion in the White House.

In recent months, Trump and his administration have expressed their dissatisfaction with Voice of America’s programming, charging that the broadcaster has increasingly become a voice for the very regimes to which its mission requires it to broadcast American values of freedom, democracy, and human rights.

On April 10, the White House put out a statement declaring, “Today … VOA too often speaks for America’s adversaries—not its citizens.”

“Voice of America … spends about $200 million each year on its mission to ‘tell America’s story’ and ‘present the policies of the United States clearly and effectively’ to people around the globe,” the statement says.

The administration cites VOA’s reporting on the coronavirus pandemic as an example of the broadcaster’s bias, saying that VOA has “amplified Beijing’s propaganda.”

Calling the lockdown in Wuhan, the epicenter of the COVID-19 outbreak, a successful “model” for the world, VOA also tweeted video of the light show put on by the regime to mark the “quarantine’s alleged end.”

VOA also used notoriously unreliable Chinese statistics to create graphics comparing deaths from the virus in China and in the United States. The administration’s statement points out that “intelligence experts [say] there is simply no way to verify the accuracy of China’s numbers.”

The Trump administration and the Hoover Institution aren’t alone in their concerns over VOA’s editorial integrity. Former Chinese employees of the Chinese-language service that broadcasts into communist mainland China, as well as to the Chinese diaspora around the world, agree that VOA has strayed from its mission.

Sasha Gong, the “first female Chinese head of the service” mentioned in the Hoover Institution report, was ultimately fired, along with several members of her team, over circumstances related to an interview with a wealthy Chinese exile who has been scathingly critical of the Chinese communist leadership. Gong told The Epoch Times that Pack is in the right position to change things at VOA, “but he just needs the right lieutenant.”

There are systemic issues facing the Chinese-language branch, however.

“If not the majority, at least half of the Chinese staff when they go back to China to see their family, they are harassed by the Chinese secret police.” Gong cited the experience of one young woman who in 2016 returned to her home only to find that two police officers were downstairs waiting for her.

“International broadcasting is a different type of business,” Gong said. “It speaks for whoever paid, like the taxpayers. There is no need to give 50 percent to the balance of whatever dictatorship that you happen to broadcast to.”

Now, however, VOA calls that “balance,” Gong continued. In those countries, Gong said, “the news is never balanced to begin with … and we, in order to balance a little bit, we have to be 100 percent pro-democracy, that’s the key.”

Li Su, who worked for 27 years in the Chinese-language service of VOA told The Epoch Times that “since 2000, the direction of VOA changed from an entity to promote freedom, democracy, and human rights, to be a ‘normal’ media, the so-called ‘balanced’ reporting.”

“VOA’s mission is to broadcast to primarily nations where democracy has not been in the system yet,” Li continued.

Li was one of Gong’s team who was fired from VOA over the 2017 interview of Chinese fugitive Guo Wengui, a billionaire who claims to have exposed massive corruption in the CCP.

“We are different; we need to have that mission,” Li said. But VOA leadership, he maintains, “said we’re just a media, we need balance.”

Their meaning of balance, Li continued, “is that on the one hand is the criticizing, and on the other side of the scale should be the dictatorship’s voice. So, you know what they say about the same issue.”

“I said, well, should we go to Nazis and ask them about their opinion about the Holocaust? Should we go to Chinese Beijing authorities to ask them their opinion on Falun Gong? Come on! They have a huge propaganda budget already! They’ve spent billions of dollars. Why should we use taxpayer money to add on to their voice?” Li said.

“The existence of VOA is to keep balance with their [the CCP’s] propaganda. We are already balanced. We don’t need their voice in our balance. That’s not right,” Li concluded.

Bridget Ann Serchak, VOA’s director of public relations, declined to comment to The Epoch Times about whether Pack’s leadership might in any way change VOA’s mission or operations.

She said in an email that “Mr. Pack has not yet taken the position as CEO and director of USAGM, as he has not yet been sworn into office,” but the USAGM Public Affairs office “is the best contact for your queries for Mr. Pack.”

Serchak offered to “conduct a review of the news stories in question” of any specific examples of “compromised” reporting by the VOA Chinese branch.

“VOA adheres to the highest journalistic standards, as outlined in the VOA Charter, and requires VOA news to ‘be accurate, objective, and comprehensive’ and that includes truthful coverage of both U.S. government and its policies and those of other nations, including China,” she said.

Li said that 10 years ago, VOA reporters were told not to cover the spiritual practice of Falun Gong, which is persecuted in China.

Asked about coverage of Falun Gong, Serchak provided search results from its Chinese-language website showing that “more than 40 stories in the past year” mention “the persecution of the Falun Gong.”

She asked to be notified of any questions “about a specific Falun Gong case or incident of persecution.”