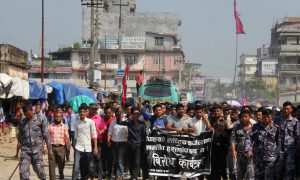 Anti-India Anger in Nepal as Essential Supplies Dry Up
0 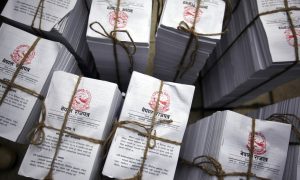 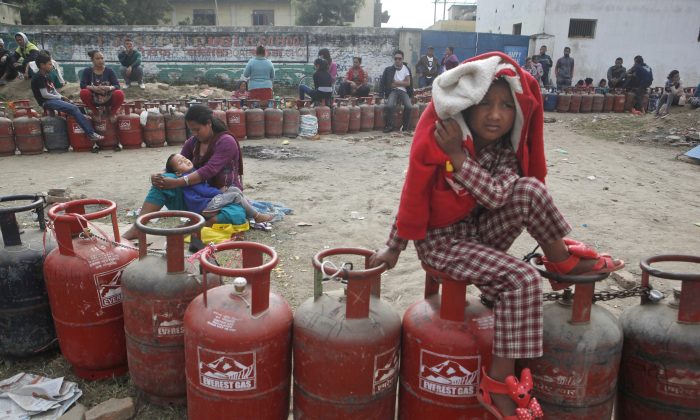 With Lives at Risk, Nepal Struggles to Escape Dysfunction

KATHMANDU, Nepal—Shiva Parwar has been camping on the pavement for five days, waiting in line for cooking gas. There are 521 gas cylinders ahead of his, and not even the dealer knows when more fuel will arrive, thanks to a two-month-long border blockade that shows no sign of ending.

“I sent my wife and child back to our village home because we don’t have the gas to cook,” said Parwar, whose roadside candy stall is shuttered while he waits. “I have been eating in restaurants with borrowed money but that too has run out. I have no option but to wait in line.”

An ethnic group’s blockade of a key border point with India is leaving Nepal with only about 15 percent of its normal supply of gasoline, diesel and cooking fuel, and creating shortages of other goods including food and medicine.

The group’s dispute with the government is part of the political dysfunction that has held back development and even prevented the adoption of a constitution for nearly a decade. Now it is threatening lives as hundreds of thousands of people, many of them displaced by Nepal’s devastating spring earthquakes, face the winter without fuel, secure housing and many essential goods.

“We are all suffering. Prices of food have gone up and there is shortage of many things here,” Parwar said in Kathmandu, the capital. “It is the common people who are suffering. The rich and the leaders are getting the fuel and gas and living comfortably.”

A look at Nepal’s crisis through the eyes of those close to the dispute, and others who are struggling with its consequences:

Members of the Madhesi ethnic group in south and southeast Nepal are blockading the border to protest Nepal’s new constitution, which was adopted in September after years of infighting. The group wants a larger Madhesi province and more seats in Parliament than they have been given.

Madhesi protesters have clashed with police, attacked public vehicles and shut down highways. At least 50 protesters, police and bystanders have died in the violence.

“Just last week the government sent their goons to disrupt our mass gathering, burning down the stage and chasing our supporters,” Yadav said.

The Madhesis have held talks with government negotiators at least nine times but have not reached any agreement.

“We are very clear with our demands,” Yadav said, accusing the government of failing to present a clear agenda.

The coalition government led by Prime Minister Khadga Prasad Oli took office after the protests began with promises it would resolve the conflict, but two months later, a solution is nowhere in sight.

The government has said it’s ready to make changes to the constitution but has said little about protesters’ demands for a bigger province. The Himalayan country has more than 100 ethnic groups, and while the Madhesi are among the largest, making up about a fifth of Nepal’s 30 million people, there are fears that a deal to end the blockade could set off protests elsewhere.

“We fear that giving more land to the Madhesi province and making changes to the state boundaries could trigger new conflicts in the country,” said Pradip Gyawali, secretary of the ruling Communist Party of Nepal (United Marxist Leninist). Gyawali said any such changes would require detailed research and agreement among the main political parties.

A Tent for Winter

Sundari Lama was forced to live in a tent this spring after her house was destroyed in the April earthquake that killed nearly 9,000 people. She eventually moved into an apartment, but now she’s back in the tent, this time because of the blockade.

With no gas available, she must cook with wood, but she’s not allowed to burn wood in the apartment. So she’s bracing for near-freezing winter temperatures in the drafty tent in the outskirts of Kathmandu with her husband and their 5-month-old daughter.

And the fuel shortage is just part of her family’s hardship. Food prices are soaring: A bottle of vegetable oil has tripled in price to 300 rupees ($2.81). And work has become scarce for her husband, a day laborer.

“First we got hit by the earthquake, losing our homes and then this blockade is causing so much difficulty and pain,” Lama said. “We are collecting wood from fallen houses and from wherever we can, but how long can we go on like this?”

Nepali Congress, the main opposition and largest party, says it is trying to mediate a solution between the government and the protesters. It blames government apathy for the lack of progress, though it shares the government’s concern that overly generous concessions to the Madhesis could drive other ethnic groups to protest.

“The government is not clear on what they are doing to deal with the situation. They have no idea or any plan and come to talks unprepared,” said Ram Hari Khatiwada, a Nepali Congress lawmaker. “But if a solution is not found soon this situation could escalate.”

Nepali Congress and Oli’s ruling party are traditional rivals, and Khatiwada acknowledged that their rivalry “is one of the reasons for the obstacles in the talks with the Madhesi.” He said it’s time for that to end.

“The prime minister needs to act as leader of a nation and not chief of a party,” he said.

One Day With Gas, Six Without

Since most of Nepal’s imported goods flow through India, many businesses are being squeezed by the blockade. They are having a tough time paying rent, utility bills and employee salaries.

Madan Gautam has been able to open his Chakupat Fuel Center in Kathmandu only about once a week, and he’s not sure how long he can survive. He gets fuel only from the state-owned Nepal Oil Corp., which distributes its limited supplies to stations on a rotating basis.

“I get about 4,000 liters (1,060 gallons) of fuel one day a week to distribute, but there are hundreds of vehicles lined up outside the pump every day,” Gautam said. “I work one day a week and have nothing to do the next six days. … At this rate we will all go out of business.”

Most people in Nepal blame politicians for their country’s troubles. After the end of an authoritarian monarchy and a bloody communist insurgency nearly a decade ago, a new constitution was supposed to bring positive changes in the new republic. The years since, however, have seen a host of political squabbles and seven different governments.

“Our leaders have failed us again and again. They have done nothing more than work either for themselves, their close supporters and or their own parties. They have done little for the country and the people,” said K.C. Raja, who serves buffalo dumplings and noodles at his Top Ten Momo Restaurant near the Boudhanath stupa in Kathmandu. He too lacks cooking gas and must cook by burning wood, which fills his small shop with smoke and has already blackened the walls.

“These leaders don’t have to wait in line to fill their fuel tanks,” Raja said, “or worry about how to cook dinner without gas.”