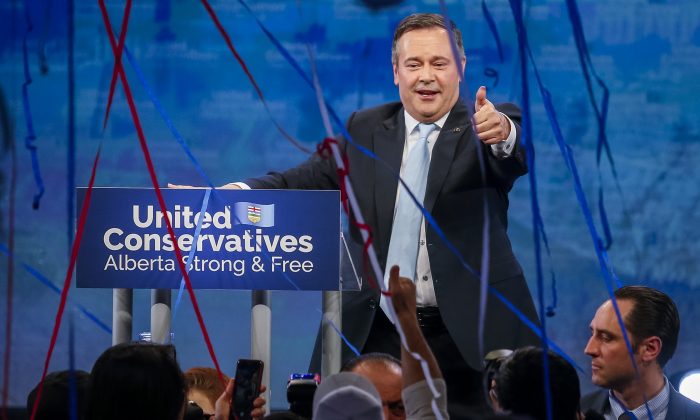 With Kenney’s Majority Win, Albertans Go Back to Their Conservative Roots

After a four-year hiatus from their traditionally conservative roots, Albertans once again voted in a right-wing government on April 16, giving Jason Kenney’s United Conservative Party (UCP) a decisive majority win.

A well-known cabinet minister in Stephen Harper’s government, Kenney put the kibosh on speculation that he would run for leadership of the federal Conservative Party after it lost the 2015 election. Instead, he decided to return home to Alberta, where the Progressive Conservatives (PC) had been ousted by the NDP.

“I think Alberta needed him, and I think he answered the call,” said Hal Danchilla, a campaign strategist for Kenney. “I think he felt that he could contribute in a meaningful way and change where Alberta was heading.”

Described as a “tireless campaigner” by his peers, Kenney began his three-year journey to premiership by first getting elected as leader of the embattled PC party in 2016 on a platform of uniting the right. He joined forces with Wildrose Party leader Brian Jean in 2017 to successfully persuade their party members to approve a merger of the two right-wing parties and form the UCP. Later that year, he defeated Jean in a leadership contest and became head of the new party.

Putting his full focus on defeating Premier Rachel Notley’s NDP in the election, Kenney campaigned on a platform of lowering taxes, implementing deregulation, and fighting to build pipelines to diversify markets for Alberta’s oil.

His campaign culminated in victory on April 16, with his party picking up 38 seats to form a 63-seat majority government. Notley’s NDP kept 24 of its 52 seats out of a total 87 seats.

Kenney began his victory speech by addressing those most impacted by Alberta’s ailing economy due to years of low oil and gas prices.

To the unemployed, “the business owners barely hanging on,” the young university and college graduates who can’t find jobs, and “those who have lost their homes and their hope after years of economic decline and stagnation,” he said, “We send this message: Help is on the way, and hope is on the horizon.”

Reiterating his platform promises, Kenney said his government will take on the “foreign-funded campaign of special interests seeking to land-lock Canadian energy,” launching initiatives to tell Alberta’s side of the story when the province’s oil is attacked as dirty, and having a public inquiry into the “foreign source of funds.”

“To the Rockefeller Brothers Fund, the Tides Foundation, LeadNow, the David Suzuki Foundation, and all the others: Your days of pushing around Albertans with impunity just ended.”

Kenney, who has promised to cut business tax to 8 percent from 12 percent and cut the “red tape burden by at least one-third,” said his government will strive to help create “tens of thousands of good jobs by restoring investor confidence.” He addressed Quebecors in French, asking for their cooperation in building pipelines for Alberta’s oil.

He closed his speech with his take on the province’s fabric as a community.

“Alberta is an idea, an idea of a society that believes deeply in the dignity of the human person, and in a great tradition of ordered liberty—the idea that strong families, communities, and resilient individuals are more effective at achieving human flourishing than a big, impersonal bureaucratic state,” he said.

David Taras, a political science professor at Mount Royal University in Calgary, said Kenney was able to pick up on the grievances of Albertans over the past few years, especially concerns about the failing economy, and becoming a symbol of change.

“There’s a sense of populist grievance, of lashing out at elites, skepticism about Ottawa, oil company executives, the education establishment,” Taras said.

Taras defines populism as tackling the issues that improve people’s lives. “Policy begins with the people. You’re trying to improve the lives of ordinary people by listening to them, and being one of them,” he said.

Marco Navarro-Génie, a senior fellow with the Frontier Centre for Public Policy who says he has been friends with the UCP leader for over two decades, believes Kenney’s success at the polls was thanks in part to the fact that he is highly articulate and persuasive.

“He is a man who can articulate his ideas and his convictions very well,” Navarro-Génie said.

Navarro-Génie defines populism as a political strategy, where the populist says “things that people like because he likes to be liked.” While he said there are “populistic” elements in Kenney’s platform—such as his proposed referendum on Canada’s equalization plan that Navarro-Génie said won’t change the federally controlled scheme—he wouldn’t label Kenney a populist. The reason is that he believes Kenney’s ideas and policies are based on personal convictions rather than just looking to please people to grow his support base.

“By his personal conviction, for example, when he was immigration minister, he set out to modify the testing and materials that the federal government distributed to immigrants because he believed it was the right thing to promote a unifying identity in a country,” Navarro-Génie said. While that wasn’t popular within the ministry, he added, they eventually got behind him and it “became a very effective idea.”