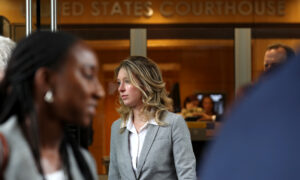 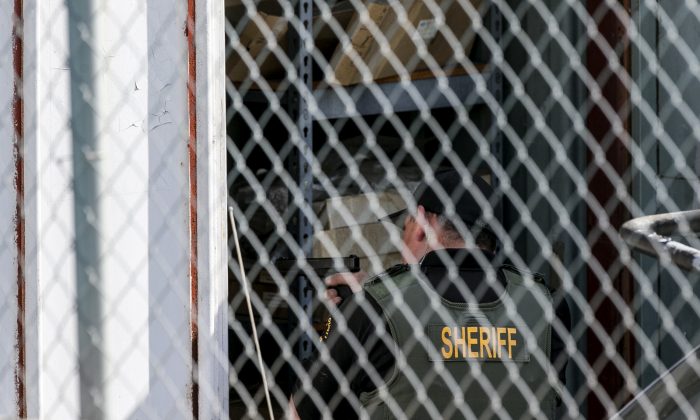 A Orange County Law enforcement agent points his gun inside a container while conducting a search for additional suspects at the back of an auto electric shop garage in Santa Ana, Calif., on Friday, Jan. 29, 2016. (AP Photo/Damian Dovarganes)
Crime and Incidents

With Inmates Back in Jail, Focus Turns to How They Escaped

SANTA ANA, Calif.—With all three violent inmates who escaped from a California jail back in custody, authorities are beginning to examine how they carried out the jailbreak and what they did during their week on the run.

Orange County Sheriff Sandra Hutchens vowed over the weekend to fix the security lapses that allowed the escape.

Early on Jan. 22, the men sawed, crawled and climbed their way out of the maximum-security Central Men’s Jail and used a rope made of bedsheets to rappel four stories to the ground.

Their escape triggered an intense manhunt.

On Friday, of the inmates, 43-year-old Bac Duong, surrendered after walking into an auto repair shop in Santa Ana just a few miles from the jail. The last two escapees, Hossein Nayeri, 37, and Jonathan Tieu, 20, were arrested Saturday after a civilian flagged down officers near San Francisco’s Golden Gate Park and pointed out a parked van that looked like one believed stolen by the inmates after the escape.

The three did not know each other before being housed in the Orange County jail. They were awaiting trial on charges including murder, attempted murder, torture and kidnapping. Duong and Tieu have ties to street gangs that operate in the shadows of Orange County’s thriving Vietnamese community.

While behind bars, the three were housed together in a large jail module that held 65 other men, about half of whom were in custody for violent felonies.

A woman who taught English at the jail, and is accused of giving Nayeri a paper copy of a Google Earth map that showed an aerial view of the entire jail compound, is also in custody.

Nooshafarin Ravaghi, a 44-year-old children’s book author, was arrested Thursday and booked on suspicion of being an accessory to a felony. She is being held pending a court appearance set for Monday.

Escaped California Inmates Must Have Had Inside Help: Expert

Authorities say she and Nayeri — who both were born in Iran — exchanged letters and had a relationship that was closer than it should have been, but stopped short of calling it romantic. Nayeri is a former Marine who grew up in the Fresno area, and authorities say it’s unclear why as an English speaker he was in her class that teaches English as a second language.