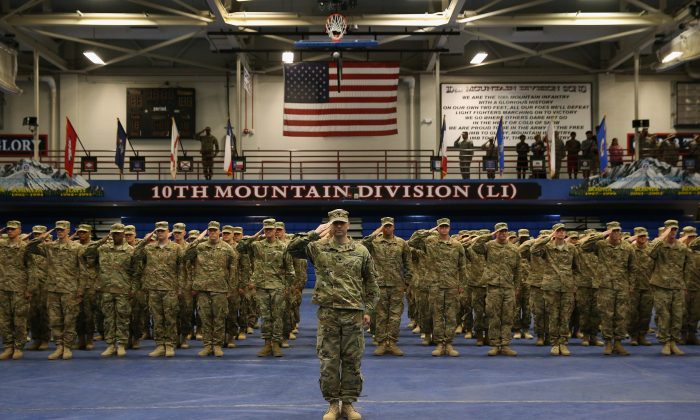 U.S. Army soldiers salute during a welcome-home ceremony after from Iraq on May 17, 2016 at Fort Drum, New York. (John Moore/Getty Images)
Opinion

With Honor and Leadership the US Army Protects America

As detailed on the official U.S. Army website, “the Army, as one of the three military departments (Army, Navy, and Air Force) reporting to the Department of Defense, is composed of two distinct and equally important components: the active component and the reserve components.  These reserve components are the United States Army Reserve and the Army National Guard.”

The heart of the mission of the U.S. Army is “to fight and win our Nation’s wars by providing prompt, sustained land dominance across the full range of military operations and spectrum of conflict in support of combatant commanders.”

Since the U.S. Army story is one of great magnitude spanning America’s entire history, perhaps the best way to crystalize it is through a story.

This story is of Captain William D. Swenson, a Medal of Honor recipient.  He was inducted into the Pentagon Hall of Heroes on Oct. 16, 2016 after serving one tour in Iraq and two tours in Afghanistan.

The Medal of Honor is the nation’s highest medal for valor in combat and it is bestowed sparingly only to the bravest of the brave.

“Captain Swenson embodies the essence of a Soldier and represents what every man and woman who dons this uniform strives to be: an individual who has earned the trust of all with whom they associate; one who possesses a humility and selflessness that we all respect; one who embraces esprit de corps and routinely demonstrates a dedication to his profession that epitomizes the ethos of the American Soldier. In the face of imminent danger, he never quit. He always put his mission first. He never accepted defeat. And above all else, he never left his fallen comrades. Just as he was there for them that day, his friends, his band of brothers are here for him today.”

The story of Captain Swenson epitomizes the heroism of those honoring America through sacrifices.  It is essential that this hero, and all have responded to the call of valor, are eternally honored.

We would be remiss, especially in the shadows of the anniversary of 9/11, to not pause to honor the fallen.

According to the Military Times (MT), the toll of those who have offered the ultimate sacrifice in conflicts including Operation Enduring Freedom, Operation Iraq Freedom, and Operation New Dawn demands our reverence.

Although these statistics may not be totally accurate, they give insight to America’s sacrifices. The most current statistics according to the MT database is 6,897 fatalities, of which 4,980 were members of the U.S. Army.

The heart of training for commissioned leaders of the U.S. Army takes place at the United States Military Academy (USMA), commonly referred to as West Point.

As detailed in my article titled “West Point Cadets: Honor, Leadership, America”, published in the Apr. 22, 2016 edition of the Epoch Times, the USMA has been “developing, motivating, and inspiring America’s leaders of character for 200 years.”

Although West Point is internationally renowned for its academic, military, patriotic, and fitness programs, the heart of its educational pedagogy is character.

The West Point Mission is “To educate, train, and inspire the Corps of Cadets so that each graduate is a commissioned leader of character committed to the values of Duty, Honor, Country and prepared for a career of professional excellence and service to the Nation as an officer in the United States Army.”

It has been my honor to be involved with numerous character development initiatives at West Point for the past ten years.

These have included three years as a speaker, mentor, and senior leader for their National Conference on Ethics in America.

Other initiatives included my speaking engagements with Lt. General Robert L. Caslen Jr., superintendent of the USMA. These involved our presentations for an FBI management retreat as well as for “The Inaugural New Jersey Conference: Character, Ethics, Leadership.” This filled to capacity conference for over 250 law enforcement officials was hosted by The Richard Stockton College of New Jersey on May 12, 2014.

Every initiative I have been privileged to participate in has always inspired a renewed appreciation for the U.S. Army, and all dedicated to serving in America’s armed forces.

America is deservingly proclaimed as “the land of the free and home of the brave.”

This proclamation is possible only because of all who honorably serve the nation in the U.S. Army and all our armed forces.

Our nation must eternally honor their sacrifices, dedication, and valor.

These patriots, as exemplified through the mission of the U.S. Army, are the ethical protectors of America’s freedom.

As the gathering storm intensifies with discord among nations, may all people of good will pray and work for peace.

Yet, let us also pray for members of the U.S. Army, and all who serve the nation.  These patriots stand ready to exercise America’s sacrosanct right to protect ourselves and all people of moral decency.

Views expressed in this article are the opinions of the author(s) and do not necessarily reflect the views of Epoch Times. Have you had a different experience visiting this region? Share it with us in the comments section!