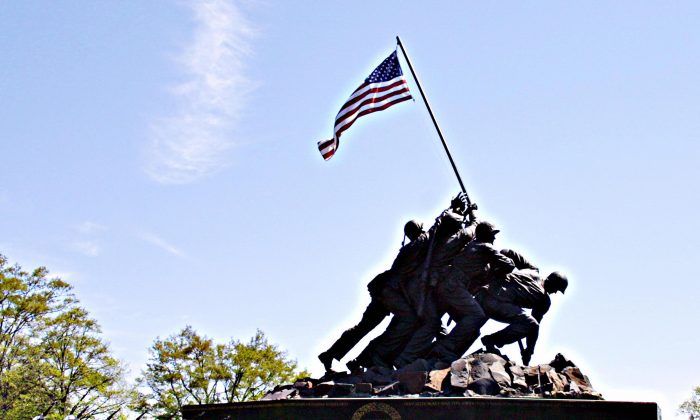 In this file photo, a U.S. Marine Corp squad practices in front of the Iwo Jima Memorial on April 26, 2005 in Arlington, VA. The memorial depicting the famous flag raising on the island of Iwo Jima during World War II honors all Marines who have fallen in all war and can be taken as a symbol of unity in the United States. (KAREN BLEIER/AFP/Getty Images)
Viewpoints

With Honor and Leadership the US Marine Corps Protects America

As detailed on the official U.S. Marine Corps website, “The Marine Corps, within the Department of the Navy, is organized as a general purpose ‘force in readiness’ to support national needs. Deploying for combat as combined-arms Marine air-ground task forces (MAGTFs), the Marine Corps provides the National Command Authorities (NCA) with a responsive force that can conduct operations across the spectrum of conflict. Recent events continue to highlight the Navy-Marine Corps team’s key national security role. Seabased, combat ready, forward deployed naval forces have been involved in more than 28 major military operations since 1995.”

The heart of the mission of the U.S. Marine Corps is “As America’s expeditionary force in readiness since 1775, the Marines are forward deployed to win our nation’s battles swiftly and aggressively in times of crisis. We fight on land, sea and air, as well as provide forces and detachments to naval ships and ground operations.”

Recently, I was inspired by a performance of the U.S. Marine Corps Silent Drill Team. It took place at the World War II Memorial on the National Mall in Washington, D.C.

The United States Marine Corps Silent Drill Platoon, often referred to as The Marching Twenty-Four, is a 24-man rifle platoon of the U.S. Marine Corps. The unit performs unique silent precision exhibition drills to exemplify the discipline of the Marine Corps.

The impeccable performance of these disciplined Marines makes one proud of being American. Their professionalism, discipline, and commitment reflect the finest of America’s armed forces and give our nation great hope for the future.

As detailed in my article titled “America’s Flag, Patriotism: Resuscitating Our Destiny,” for the Mar. 20, 2015 edition of the Epoch Times, I stressed that “the American flag is the symbol of our nation, deserving of reverence, honor, and dignity.”

The article highlighted the immortalized iconic flag-raising of the U.S. Marines during the battle of Iwo Jima. This defining moment in American history gave us hope. It was a counterpoint to the heart-wrenching sinking of our ships at Pearl Harbor that cast a dark cloud upon us.

America is now at a crossroads with expressions of discontent taking place during the National Anthem. But we must have great expectations that our divisions will lead to unity expressed through respect for our flag, and that we will once again stand together.

The American Flag, immortalized by its raising at Iwo Jima, is mystically inseparable from its raising at each sporting event, school, community, and workplace. Our flag must be eternally revered across our homeland and especially in the heart of all privileged to call our nation home.

Since the history of the U.S. Marine Corps is one of profound magnitude, spanning America’s entire history, perhaps the best way to crystallize it is through a story of one of its legends.

Patterson served in the Marines from 1943-1945 and received the Silver Congressional Medal of Honor.

According to the official website of the Central Intelligence Agency (CIA), during World War II the Marine Corps used the Navajo language to create an unbreakable security code.

The code developed by the Navajo language was virtually undecipherable especially since it was further complicated by word substitution. During World War II about 400 Navajos participated in the code program. These code talkers were critical to America’s victory and vital to every U.S. Marine assault in the Pacific from 1942-1945.

“It’s a sad day on the Navajo Nation when we lose a national treasure like we did in losing Navajo Nation Code Talker David Patterson, Sr., beyond his service in protecting our freedom, he was a beloved husband, father and grandfather.”

America is deservingly proclaimed as “the land of the free and home of the brave.”

This proclamation is possible only because of all who honorably serve in the U.S. Marine Corps and all our armed forces.

Our nation must eternally honor their sacrifices, dedication, and valor.

These patriots, as exemplified through the mission of the U.S. Marine Corps, are the ethical protectors of America’s freedom.

As the gathering storm intensifies with discord among nations, may all people of good will pray and work for peace. Let us also pray that our American Flag becomes a rallying point for unity and that we soon all stand together to honor the character our flag symbolizes.

Let us also pray for members of the U.S. Marine Corps, and all who serve the nation. These patriots stand ready always to honor our flag, and to exercise America’s sacrosanct right to protect ourselves and all people of moral decency.