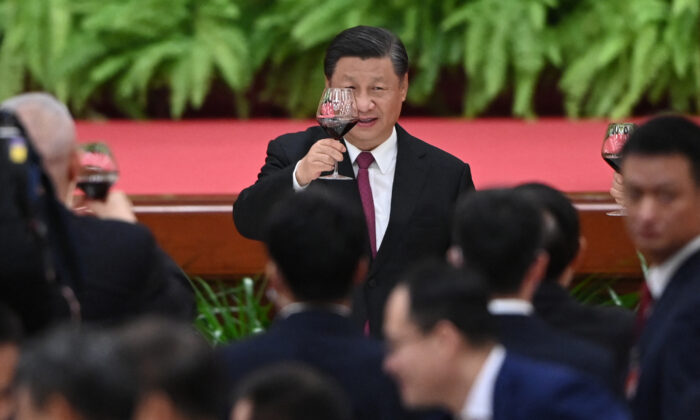 Chinese leader Xi Jinping raises his glass after a speech by Premier Li Keqiang at a reception at the Great Hall of the People in Beijing on Sept. 30, 2021. (Greg Baker/AFP via Getty Images)
Chinese Regime

With ‘Historical Resolution,’ Xi Angles for a Third Term as Communist Party Chief

Following a three-day plenary session, the Chinese Communist Party (CCP) leadership on Nov. 11 announced the passage of a historical resolution touting the “political achievements” of General Secretary Xi Jinping, in addition to the “major achievements and historical experience” of the CCP over its 100-year history.

The Party’s 19th Central Committee began its Sixth Plenum on Nov. 8, with state news agency Xinhua releasing a communique from the plenum announcing the major points of the meeting on the day of its conclusion.

Titled “Resolution on the Major Achievements and Historical Experience of the Party over the Past Century,” the resolution is only the third such document to be issued since the Communist Party was founded in 1921. The text of the historical resolution has yet to be released.

According to the communique, Xi led the regime to make “new and significant achievements in various undertakings” despite communist China’s relations with the rest of the world having worsened considerably “under the combined impact of worldwide changes of a scale unseen in a century and the global coronavirus pandemic.”

The Sixth Plenum meeting stressed the crucial role of Xi’s interpretation of Marxism-Leninism, called “Xi Jinping Thought on Socialism with Chinese Characteristics for a New Era.” Also, the communique highlighted the importance of “upholding Comrade Xi Jinping’s core position in Party Central and in the Party as a whole.”

“Party Central” refers to the leadership of the CCP, based in Beijing. The Party counts more than 90 million members in various positions controlling Chinese government and society.

The historical resolution is widely regarded as a means of strengthening Xi’s authority as he prepares to take a third term as CCP leader. Many China watchers have compared the document with those released by previous communist leaders—Mao Zedong in 1945 and Deng Xiaoping in 1981.

Going by current political norms, the head of the Party is limited to two five-year terms. However, the Xi leadership has shown no indication of appointing a successor.

Various editorials published in Chinese state mouthpieces before and during the Sixth Plenum have lionized Xi as a driving force behind the “great rejuvenation of the Chinese nation.”

Tony Saich, a China-focused academic at Harvard University, told the Washington Post that the latest historical resolution “is geared to say that the Party desperately wants Xi to stay on, will plead with him to stay on, because he is the leader to take China forward.”

Alex Dukalskis, a Dublin-based professor of politics and international relations, told the Independent that the document’s passage sends an “extremely powerful signal” of Xi’s primacy within the Communist Party. The historical resolution, he said, shows that the Chinese leader is unopposed in his desire to rule indefinitely.

Not all are convinced that the adoption of a new historical resolution is a clear demonstration of Xi’s power, or that the 68-year-old enjoys unimpeded authority over the CCP.

In October, after Beijing’s announcement that the CCP Central Committee would discuss the historical resolution at the plenary session, commentator Wang Xiangwei of the South China Morning Post wrote that Xi’s document would likely “be forward looking” about the continuation of Xi’s rule, rather than focusing on “major mistakes and lessons” of previous leaders.

According to the Sixth Plenum communique, the historical resolution stresses the role previous leaders played by each promulgating their own interpretations of Marxism to strengthen the CCP and ensure its survival.

This contrasts with the resolutions issued by Mao and Deng, which sharply criticized past rivals. The 1945 resolution repudiated the faction of the CCP that called for closer cooperation with the Soviet Union and upheld the Maoist doctrine of a Chinese communist movement run independently of Moscow. The 1981 resolution under Deng, meanwhile, condemned Mao’s infamous Cultural Revolution and affirmed the policy of economic reform.

In a Nov. 12 analysis, Will Wo-Lap Lam, a senior fellow at the Jamestown Foundation, cited China researcher and dissident Chen Pokong, who argues that Xi has incurred strong resentment from rivals in the Chinese regime over his efforts to build a cult of personality.

According to Lam, this muted opposition could explain the presence of a long paragraph in the communique “devoted to the policies of ex-presidents Jiang Zemin and Hu Jintao, who are well-known as Xi’s political rivals.”

Despite this rivalry, the communique says that Jiang’s “Three Represents” theory “united and led the whole Party and the entire nation in upholding the Party’s basic theory and line,” and helped “launch socialism with Chinese characteristics into the 21st century.”

Challenges Behind the Scenes

Jiang, now 95, and his allies in the CCP are widely understood as having retained political dominance far beyond 2002, when the leader officially handed the reins to successor Hu Jintao.

However, since coming to office in 2012, Xi has run a nonstop anti-corruption campaign, purging hundreds of senior Chinese officials linked to Jiang’s faction.

According to analysts at SinoInsider, a New York-based risk consultancy specializing in Chinese elite politics, Beijing’s issuance of a relatively soft historical resolution indicates that despite his nine years in office, Xi is unable to root out the influence of the Jiang faction or regime elites who are dissatisfied with the direction of the CCP under Xi’s rule.

In recent years, attitudes among the international community toward Beijing have darkened considerably, especially amid revelations of mass incarceration of ethnic Muslim minorities in Xinjiang, the suppression of Hong Kong’s pro-democracy movement, and other signs that the Communist Party remains unreformed in its aim for totalitarian dominance.

And at home, the CCP faces growing economic and social crises, such as a collapsing property market, persistent power shortages, severe demographic decline, and growing resurgences of COVID-19.

“The Sixth Plenum can be considered to be an effort by Xi Jinping to openly mobilize and recruit supporters amid the ongoing factional struggle in the CCP elite” and in view of the “perfect storm” of challenges facing Xi and the regime, SinoInsider wrote in a Nov. 11 newsletter.

However, the analysis argues, authority “derived from propaganda and not genuine political accomplishments is fleeting and insubstantial.”