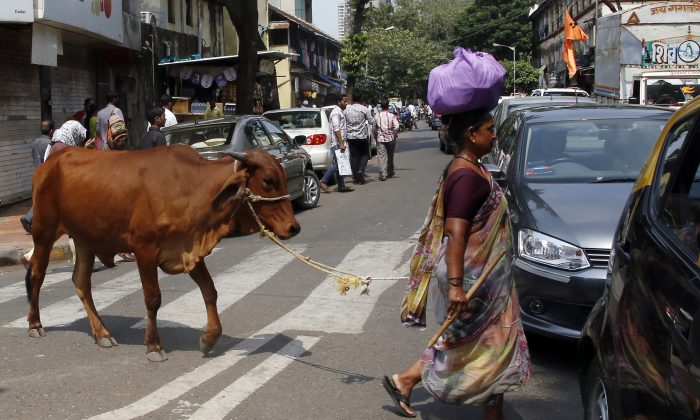 In this Friday, Oct. 9, 2015 photo, a woman leads her cow across a road collecting alms from devout Hindus in Mumbai, India. (AP Photo/Rajanish Kakade)
Asia & Pacific

NEW DELHI—The legislator was full of outrage when he arrived in the north Indian village days after the killing of a Muslim farmer who was rumored to have slaughtered cows. A Hindu mob had smashed through the heavy wooden door to the man’s home, then beat him to death with his wife’s sewing machine.

The legislator’s anger, though, was not about the killing. Instead, Sangeet Som was furious that men had been arrested in the attack in the village, just 30 miles from New Delhi. Som, a member of India’s ruling Bharatiya Janata Party, called the arrests “atrocities on innocent villagers.” As for the family of the dead man, he dismissed them as “those cow killers.”

A few days later, a half-dozen BJP politicians slapped around a legislator on the floor of a state legislature, angry that he had served beef at a party. In south India, six members of a leftist student political party were suspended after their attempt to serve beef curry on campus to protest the farmer’s killing set off a melee. On Friday, violence swept another northern village amid rumors that a cow had been slaughtered, with a crowd, who had chased down two Muslim men they suspected of cow-killing, clashing with police and burning several cars. Some villagers and police were injured, but no major injuries were reported.

Cows have become a tool of political parties, an electioneering code word and a rallying cry for both Hindu nationalists and their opponents.

Cows have long been sacred to Hindus, worshipped as a mother figure and since ancient times associated  with the god Krishna. But increasingly, cows are also political. They have become a tool of political parties, an electioneering code word and a rallying cry for both Hindu nationalists and their opponents.

“We should decide if Hindus want to fight Muslims or poverty. Muslims must decide if they want to fight Hindus or poverty,” Modi said at a campaign rally in Bihar State, where elections start next week. “It is unity, communal harmony, brotherhood, and peace that will take the nation forward.”

But Modi also rose to power as Hindu nationalist, and since his election last year hard-line Hindus have been demanding that India ban the sale of beef—a key industry within India’s poor, minority Muslim community. In many Indian states, the slaughtering of cows and selling of beef are already either restricted or banned.

In the past, Modi spoke out angrily against India’s beef industry.

Modi has danced delicately between an intense desire to be seen as a tolerant international statesman and the need to satisfy a political base that is deeply distrustful of Muslims and other minorities.

“Brothers and sisters, I don’t know whether this saddens you, but my heart screams out” at the rise of Indian beef exports, Modi said in a 2012 speech. “I am unable to understand why you are silent, why you are taking this lying down.”

Since becoming prime minister, though, he has danced delicately between an intense desire to be seen as a tolerant international statesman—the sort of man who is greeted warmly by presidents and jokes around with Facebook’s Mark Zuckerberg—and the need to satisfy a political base that is deeply distrustful of Muslims and other minorities.

That dance has, his critics said, emboldened extremist Hindus and given rise to everything from a series of church vandalisms to the recent mob killing. Criticism of cow slaughter, some said, is often simply code for anti-Muslim sentiments.

India, a country of 1.3 billion, is about 81 percent Hindu and 13 percent Muslim.

Inder Malhotra, a political analyst and former editor of the Times of India newspaper, criticized Modi for not speaking more strongly against the recent mob attack, and for his silence about comments like Som’s. “Modi has not said a word against those in his party who have been making the most obnoxious statements,” Malhotra said.

Authorities are still investigating after the arrrests of eight villagers for Akhlaq’s death, but announced Friday that the meat found in his home turned out to be mutton—not beef. Meanwhile Som, the Hindu firebrand and avowed strict vegetarian, has denied media reports that he once owned part of a major Indian meat export company. The company exports goat and buffalo meat, but apparently not beef.

Modi supporters see some opponents as deliberately provoking Hindus. Some “beef parties” — when beef is eaten in defiance of local laws—are clearly intended to invite a backlash and score political points against the BJP.

Such actions “have pushed a society that worships the cow as mother to question the real motives of the seculars,” Tarun Vijay, a member of parliament and top BJP official, wrote recently in The Indian Express.

He also criticized the killing of Akhlaq, writing, “Lynching a person merely on suspicion is absolutely wrong.”

The public bitterness on both sides hides the reality of much of Indian life, where Hindus and Muslims can live alongside one another for decades without incident.

In Akhlaq’s village, for example, more than 100 Hindu villagers trekked to his family’s home a few days after the attack, to urge his family not to move away. Hindu leaders also pledged to ensure that upcoming Muslim marriages went ahead without incident.