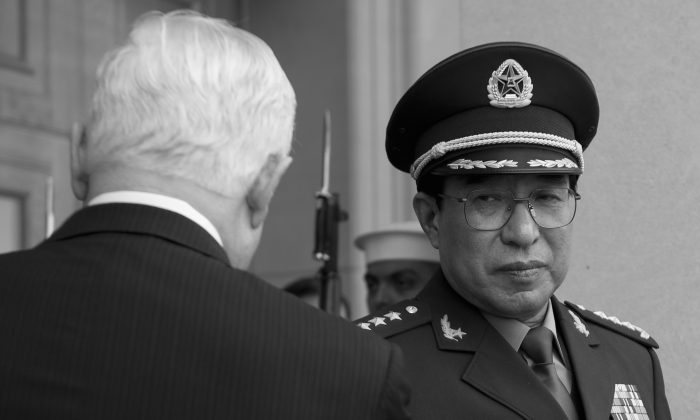 With the purge of a retired military officer Chinese Communist Party leader Xi Jinping served notice on all of China’s military that he is in command. By asserting control, Xi took one more step to defeating the Party faction that has opposed him.

A front page article in the People’s Liberation Army Daily, the mouthpiece of the PLA, announced that the four general headquarters of the forces—the navy, the air force, the Second Artillery, which includes China’s strategic nuclear arsenal, and the seven military regions—all solemnly supported the decision to rid the Communist Party of retired Gen. Xu Caihou.

The stripping of Xu’s Party membership on July 1 was “absolutely wise” and “entirely correct,” the jointly drafted editorial said. All the forces will “draw profound lessons from it” and take Xu’s downfall as a “negative example.”

Military officers and soldiers across the forces all vowed to “strongly uphold the Party’s correct decision,” and “earnestly unify our thinking under the spirit of Party Central.” Apart from absolute obedience to Chairman Xi Jinping, the forces promised to “listen to the Party’s words, walk with the Party, not fear danger, not listen to static noise, and not be confused by rumors.”

The extravagant commitments to loyalty and obedience likely reflect the seriousness of the push to unite the military under Xi. Until late 2012, Gen. Xu was one of the most powerful men in the Chinese military, and therefore in China.

Xu was a vice chairman of the Central Military Commission (CMC), the organ used by the Party to control the military from 2004 until November 2012. There are typically two vice chairmen of the CMC at any point, and one chairman: always the Party leader himself.

Prior to that, Gen. Xu was the director of the General Political Department of the PLA, a sensitive and powerful position, effectively the top political commissar, ensuring that the troops and officer corps are properly indoctrinated in Party ideology, and also seeing to a range of external infiltration and propaganda functions under the “political warfare” portfolio, which seeks to manipulate perceptions about the People’s Republic of China by outside observers.

As an indication of Xu’s prominence, he was feted to a series of round-table discussions in the Washington think tank circuit when he came on an official tour in 2009.

“I’ve had the privilege this morning to talk with Gen. Xu and he is a fascinating man with an interesting perspective on the world,” said John Hamre, president of the Center for Strategic and International Studies, where Xu spoke in October 2009. Hamre called him “a visionary at a time when we need new pathways of cooperation between the United States and China.”

But most significantly in China, Gen. Xu was promoted to his position by Jiang Zemin, the leader of the Chinese Communist Party from 1989 to 2002, and the formal Party head of the military forces until 2004. Even after stepping down from all military-related posts in 2005, Jiang still retained influence over the military through individuals like Xu. Because of the lack of rule of law and independent institutions in China, the role of personal patronage and loyalty is decisive in elite Chinese communist politics.

Indeed, the purge of Xu Caihou has been compared to the departure of the “Yang brothers” —that is, Yang Shangkun, former vice chair of the CMC, and his half-brother Yang Baibing, former secretary general of the CMC and, like Xu, head of the General Political Department—in the early 1990s. The Yangs had promoted their own generals through the ranks, but were relieved of their authority by Deng Xiaoping, the former Party patriarch, when he feared that they were building up their own power base in the military.

“In the wake of the fall of the Yang brothers, a significant portion of the PLA’s senior officers were reportedly transferred or retired,” writes Larry Wortzel, a longtime analyst of the Chinese military.

The justification for that reshuffling was strikingly similar to the current military propaganda, as stated in a Party-controlled newspaper in Hong Kong at the time: that is, “to ensure that the army will remain unanimous with the Chinese Communist Party Central Committee ideologically, in action and politically, to enhance its consciousness and resoluteness in implementing the Party’s basic line.”

However, for all the tumult the purge of the Yangs brought, they were still not stripped of their Party membership and court martialled.

Reports in March of this year seemed to underscore how seriously Xi Jinping has taken the task of punishing Xu Caihou: the South China Morning Post reported that military security agents took him from his bed in a military hospital in Beijing. On the same day his wife, daughter, and secretary were reportedly also detained.

“This could be Xi Jinping making sure that he gets rid of some people so he can appoint those who are more loyal to him,” offered June Teufel Dreyer, a professor of Chinese politics at the University of Miami. “If you purge somebody who is retired, it doesn’t hurt the chain of command.”

According to Cheng Xiaonong, a scholar of the Chinese political system, Xi Jinping has been dealing with rival Party officials loyal to former Party leader Jiang Zemin that sought to undermine his ascent to power before he even became Party leader in November 2012. This was primarily in the form of Zhou Yongkang, the former security chief, and Bo Xilai, the imprisoned Politburo member.

“Since then he has met a lot of resistance in fights and struggles, and now he is trying to consolidate his power, to keep his position safe from challenges—especially the retirees at the top, like Jiang Zemin, Zeng Qinghong,” Cheng said in a telephone interview.

The purge of Xu Caihou follows this pattern, given that Xu owed his advancement to Jiang Zemin. “The only question was whether Xi Jinping was able to touch him—once he was able to do that, then he would definitely want to do that.”

Though Xu held no official posts in the military since the leadership changeover at the end of 2012, his purge now will be sufficient as a warning to those he brought up through the ranks, and may also be followed by further reshuffling inside the forces.

Xi Jinping’s incentives, as paramount leader in China, may differ from those of the hawkish military generals, Cheng said. “The generals don’t want peace, they want trouble. If Xi allows them to do whatever they want, they will make trouble with Japan, Vietnam, and other countries.”

“The only person who doesn’t want war is Xi Jinping, because war will only give him trouble, nothing but trouble. He needs time to consolidate his power,” Cheng said.

That may ultimately result in a softer position by the Communist Party on certain international issues—”but not much,” Cheng said. “If he’s too soft, then he might come under attack by others groups.”