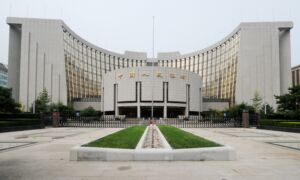 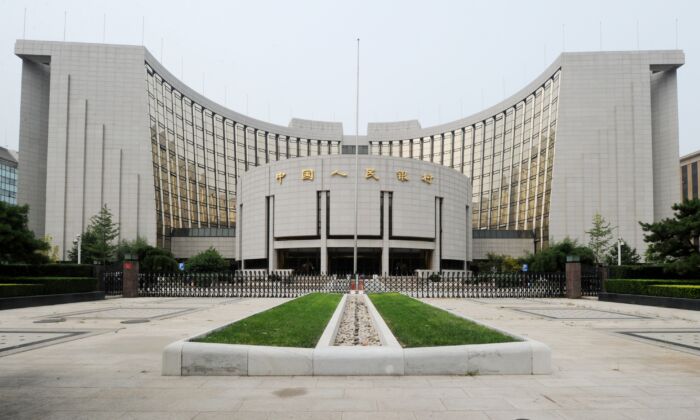 The headquarters of the People's Bank of China (PBC or PBOC), the Chinese central bank, in Beijing on Aug. 7, 2011. (Mark Ralston/AFP via Getty Images)
Thinking About China

Ever since China launched its digital yuan in 2019, western commentary has reacted to the initiative with waves of nonsense. Many of these articles suggest that the People’s Bank of China (PBOC) has stolen a march on the West. Many claim that China’s digital effort will secure the yuan global status and enable it to supplant the dollar as the world’s premier currency for international reserves and transactions.

The venerable Economist magazine forecast that soon everyone everywhere will be using the digital yuan. The most recent wave of such commentary emerged after the Federal Reserve (Fed) and other central banks announced that they, too, are looking into digital versions of their own respective currencies. Media attention has suggested that the Fed and others are playing catch up.

These claims are overblown to say the least, entirely misplaced, in fact. A digital yuan hardly constitutes a basis for a global currency. Many countries, including the United States, have laws against transacting domestic business in any currency other than their own. Besides, a digital yuan could add only marginally to existing digital arrangements in which credit and debit cards, Apple watches, PayPal, easy wire transfers, and the like have long-provided efficient and convenient ways to manage both international and domestic transactions. All the digital yuan would do is add a new layer to this fully functioning system. That addition hardly constitutes a revolution, any more than if American Express were to issue a new kind of card. Nor will a digital version of the yuan overcome all the many impediments in the way of its ability to become the premier global reserve currency.

What should have been clear at the onset is that rather than creating a global upset, the digital yuan, in a manner entirely consistent with so much else Beijing does, aims at domestic surveillance.

Issuing a digital currency—whether a yuan, a dollar, a euro, a yen, whatever—takes a big step toward supplanting paper currency and coin, and thereby the main way people can transact business anonymously.

Paper and coin are about the only way people in China can evade strict controls and get assets out of the country or into an alternative currency. By using the digital yuan to eradicate paper and coin, or at the very least severely limiting their role, Beijing will have closed off any ability of its citizens to move assets and transact business unobserved. Once this happens, the authorities will have the ability to track every citizen’s transactions, how much each person spends, on what, where he or she spends it, as well as when.

Central banks, even in less authoritative systems, could do the same with their digital currencies once they take hold, but they will likely be less ambitious than the PBOC and think mostly in terms of money laundering and tax evasion. Whether the government’s focus is narrow or broad, surveillance of one kind or another is the objective.

To be sure, the authorities everywhere have the option of using existing digital networks to track most people’s transactions, whether through credit card, bank, or equivalent records. But accessing these still largely private sources is cumbersome and, in some places, faces numerous legal hurdles. Beijing might face additional impediments because today much of this information resides abroad. Accessing the elements of this system would also have a hit or miss quality that would prevent the authorities amassing an all-but-complete picture of people’s transactions.

But a digital currency would have it all in one easily accessible government computer. The arrangement could even enable the authorities to develop algorithms to cull transactions and flag anything suspicious, something that is all but impossible with current arrangements. Besides, it is already clear that current digital arrangements, for all their convenience and efficiency, have not driven out paper and coin as effectively as digital currencies are likely to do.

Beijing does indeed have grand global ambitions. It clearly wants to make China the world’s leading economy and see the yuan supplant the dollar’s global position. It wants to dominate world trade, a clear objective of the Belt and Road initiative. And it wants the political, diplomatic, and military advantages that goes along with such economic and financial dominance. The digital yuan might have a role in this grand scheme but only after Beijing has put into place other, needed, and much more significant elements.

For now, the digital currency is neither part of such grand designs nor the “revolution” described by less-than-thoughtful western reports. It is instead a straightforward if innovative way to secure still more complete domestic control and thereby ensure that nothing the Chinese people do, even inadvertently, can threaten the authorities in Beijing.