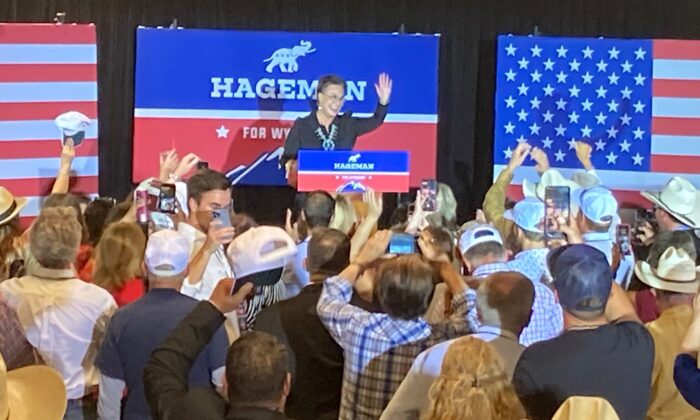 With Cheney’s Ouster, at Least 8 of 10 GOP Trump Impeachment Backers Will Be Out of Congress Next Session

CHEYENNE, Wyo.—Three-term Rep. Liz Cheney (R-Wyo.) became the eighth of the 10 Republicans who voted for Donald Trump’s impeachment to either retire or be defeated by party rivals endorsed by the former president.

Cheney, one of Trump’s most vociferous critics, was defeated in Wyoming’s Aug. 16 Republican primary for the state’s lone congressional seat by Harriet Hageman, a Cheyenne natural resources attorney.

Cheney joins four Republican incumbents of the 10 Republican House members who voted for Trump’s impeachment to have their renominations canceled by their constituents.

The only two to advance to the general election in primary battles are Rep. Dan Newhouse (R-Wash.) and Rep. David Valadao (R-Calif.).

Of the 12 congressional incumbents whose reelection bids have been short-circuited by primary rivals, five fell to a fellow incumbent after post-2020 Census redistricting.

Three sitting congressional representatives were defeated by challengers in races not directly influenced by endorsements from the former president.

Rep. Steven Palazzo (R-Miss.), under fire for his alleged misuse of campaign and congressional funds, lost his primary to Mike Ezell.

Rep. Madison Cawthorn (R-N.C.), whose two-year tenure was marked by controversial statements and antics, was tossed in favor of Chuck Edwards in their Republican primary.

Rep. Kurt Schrader (D-Ore.), the only congressional Democrat who lost to a nonincumbent thus far in the 2020 midterm primary cycle, was outpolled by progressive Jamie McLeod-Skinner, despite receiving an endorsement by President Joe Biden.

Hageman thanked Trump for his “support, encouragement, and guidance” since she launched her campaign in September 2021. He staged a rally in Casper in May on her behalf.

“I’m obviously grateful” for Trump’s endorsement, Hageman told a cheering crowd at Cheyenne’s Frontier Days rodeo complex. The former president’s nod is “what propelled us to where we are today,” she said.

In a state that voted 70 percent for Trump in 2020—the highest tally for any candidate in any state—Cheney fell into disfavor with many constituents for being among the 10 House Republicans who voted to impeach Trump and for serving as co-chair of the House committee investigating the Jan. 6, 2021, Capitol breach.

Despite her constituents’ overwhelming support for the former president, Cheney never relented in maintaining that Trump presents a risk to U.S. democracy.

Cheney didn’t hesitate to make that point while addressing supporters in Jackson Hole, Wyoming, after conceding the Aug. 16 race, telling supporters that she remains committed to preventing Trump from returning to the White House.

“Our nation is barreling again toward crisis, lawlessness, and violence,” Cheney said. “No American should support election deniers.”

But while Cheney’s actions and Trump’s endorsement were pivotal in Hageman’s victory, there was also something else on Wyoming voters’ minds—and Hageman warned that it’s something that incumbents across the country should heed.

Cheney was coined “the Virginian” by some constituents who mocked her for not qualifying as a state resident to get a fishing license.

Even Cheney’s home base in Teton County, and its Jackson Hole “jet-setter” enclave near Yellowstone, is regarded by some as not reflective of the rest of the state.

Cheney’s rare appearances in Wyoming may also have contributed to her wide-margin loss.

Hageman, raised on a ranch near Fort Laramie, Wyoming, on the state’s eastern high plains and a graduate of the University of Wyoming, told voters in Lusk, Wyoming, on Aug. 9 that she would be “a representative who will champion Wyoming ideals.”

Hageman emphasized her Wyoming roots, as well as her background in natural resources, water rights, and public lands policy during a near-year-long campaign that has seen her travel 40,000 miles in visiting all 23 of the state’s counties repeatedly.

Hageman reiterated her pledge to visit all 23 counties at least once a year and to be “held accountable” for her actions by her constituents during her Aug. 16 victory speech.

“Wyoming has just spoken,” Hageman said. “We can dislodge entrenched politicians who forget about the people they are supposed to be serving.

“By our vote today, Wyoming has put the elites on notice. We are no longer going to tolerate representatives who don’t represent us. If you are elected to represent us, you better … represent us. I will be accountable to the citizens of Wyoming because I am one of you.”