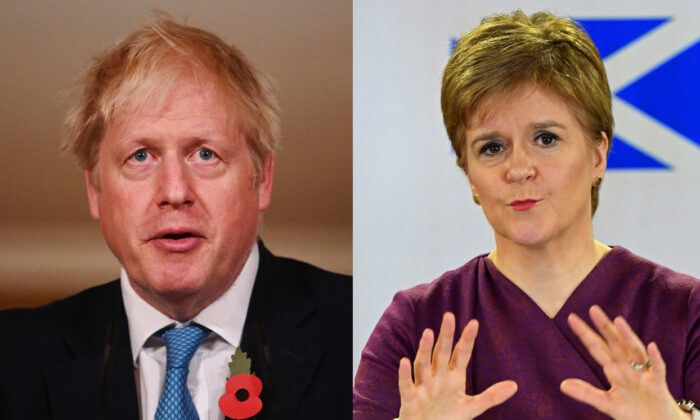 As the curtain prepares to fall on the British Prime Minister Boris Johnson’s premiership “serious political gamesmanship” will determine Scotland’s future after its devolved government threw down the gauntlet on independence, according to political observers.

The leader of the Scottish National Party and Scotland’s First Minister, Nicola Sturgeon, has declared her government’s aim to make the UK’s next general election a de facto vote on Scottish independence if permission to hold a referendum on Oct. 19, 2023 is denied.

The first—and last referendum—on whether Scotland should become an independent country in 2014 saw voters decide to remain in the 300-year-old union by a 10 percent margin.

Now whoever takes over the leadership of the ruling Conservative Party in London looks certain to refuse the request to grant a Section 30 order to hold another referendum, as Johnson has.

An application to challenge the decision in the UK Supreme Court is seen not only by critics as unlikely to succeed.

So how will the loss of Johnson affect the cause for Scottish independence?

Johnson’s lack of appeal north of the border has never really been in doubt, and can, perhaps, be summed up by one journalist recently writing in The National, a pro-independence newspaper: “Like the vast majority of Scots, I am thoroughly immune to Boris Johnson’s charms…”

And it wasn’t only his ideological opponents. A majority of Scottish Tory MPs clearly thought their cause would be better served without the embattled prime minister, as four of the six voted no confidence in him last month.

“Boris was never particularly popular in Scotland even among Scottish Conservatives,” a Conservative activist who asked not to be named told The Epoch Times. “So I think there is a limited amount of damage—if you like—in his departure.”

Pamela Nash, a former Labour MP, now chief executive of the pro-UK campaign group Scotland in Union based in Glasgow, suggests that antipathy to his public persona north of the border is such that Johnson’s downfall could prove to be a spoke in the independence wheel.

“I don’t think the SNP will be very happy that Boris is going because they have been able to use him as the ‘bogeyman,’” Nash told The Epoch Times. “It’s been a big part of their campaign for a referendum to get away from having Boris Johnson as a leader, as part of the UK.”

But Nash is still nervous of another referendum, saying, “By its very nature it will divide us once again.”

Pivoting From Johnson to His Party

Scottish leaders have been quick to pivot to suggesting Johnson is only part of the problem.

“This is about so much more than one individual,” Sturgeon stressed in an interview with the BBC. “While Boris Johnson is resigning, this damage is not limited to Boris Johnson—he is merely the symptom of a broken political system that elevates people like him into power.”

Johnson was only part of “a fundamentally broken Westminster system, which places elitism, entitlement, and cronyism at its core,” Sturgeon insisted.

Patrick Harvey, co-leader of the Scottish Greens, who are in a power-sharing arrangement with the SNP and support independence, went further: “Let’s not kid ourselves: Johnson was never fit to hold high office.

“Those in the Conservative Party who facilitated Johnson’s lying, his lawbreaking, and his incompetence must be held to account too.”

Boris Johnson had also appointed himself the UK’s first ever minister for the union. Conversely, it may be his departure that aids it most in the short term.

Whether Johnson’s fall will ultimately prove a stabilising factor for the union remains to be seen.

When asked about the implications of his resignation for Scotland’s potential bid for independence next year, the “instinctive answer” of Professor Iain Begg from the European Institute at the London School of Economics is “none.”

“Because I cannot see any other Tory leader taking a different view on agreeing to Sturgeon’s request,” Begg told The Epoch Times.

The reality of a stand-off such as seems to be hoving into view would see “serious political gamesmanship and I wouldn’t like to hazard a guess as to how that will play out, actually,” Stephen Fisher, professor of political sociology at Oxford University, ventured.

In a speech to the Scottish Parliament on June 28, Sturgeon insisted that “last May, the people of Scotland said ‘yes’ to an independence referendum by electing a clear majority of MSPs committed to that outcome.”

While some accuse the SNP of exploiting every opportunity to pursue independence, the gripes are not just politiking.

A fundamental complaint is that Scotland has repeatedly had Conservative governments foisted on it, with a majority of Scots having not voted for a Tory government in a UK general election since 1955.

In the Brexit referendum of 2016, in Scotland the majority voted to remain in the EU. Many proponents of independence said this amounted to Scotland being taken out of the EU against the will of the Scottish people.

Yet for Scottish Liberal Democrat deputy leader Wendy Chamberlain, another vote on independence in Scotland is not the answer to concerns about leaving the EU.

“We oppose putting up new barriers to people and business, whether that’s down the Irish Sea, the Channel, or at Gretna.

“Leaving the EU was a mistake and it came with profound consequences. But the solution isn’t for Scotland to throw more harmful nationalism at the situation.”

With Conservative leadership hopefuls now jockeying to replace him, Fisher thinks whoever succeeds Johnson will have options to woo Scots.

“You’d expect any Conservative leader to be committed to the union of Scotland in the UK and that shouldn’t really discriminate much between candidates.

“But there ought to be some who can create a more compelling story as to why they care about that.

“If you get a more moderate prime minister who is more popular in Scotland maybe the antipathy towards the UK government would decline across the whole of Scottish society.”

They could include better Brexit arrangements for the export industry.

If the new leader is less concerned with climate change than Johnson was they might be more sympathetic to strengthening Scotland’s fossil fuel industries.

Or they could look to reap “huge advantages in Scotland with access to increasingly cheap renewable energy resources” to enhance energy security and climate change mitigation,” Fisher told The Epoch Times.

Other gestures could include tackling the soaring cost-of-living crisis and the anticipated rise in fuel bills.

“Something that shows that the UK government can, with its size and power and reserves, actually help solve problems like that might show to people in Scotland that there is some advantage to being part of the UK.”

Could Scotland Rejoin the EU?

A major factor in the question about independence is whether an independent Scotland could rejoin the European Union.

But Nash thinks the problems of leaving the United Kingdom would outweigh the benefits of rejoining the EU as “60 percent of trade is with the rest of the UK.”

She also raises the spectre that haunted the first failed independence referendum. That it would need only one EU member state to veto Scotland’s application to rejoin it.

“There are still countries that would be very, very cautious about welcoming Scotland because of the separatist groups in their own country,” Nash says, adding, “Spain is the main one which comes to mind.”

These are issues for the debate if and when it comes.

As things stand, the stage appears set for a showdown between London and Edinburgh over whether the questions will be asked at all.

“In the context of a campaign things could go either way,” says Fisher. “It does remain a possibility that if there’s a referendum there could be support for independence winning next time because things are so evenly balanced at the moment.”

With suggestions having already been floated that Johnson’s successor could seek a new mandate via a general election, Sturgeon’s brinkmanship could be tested sooner rather than later.