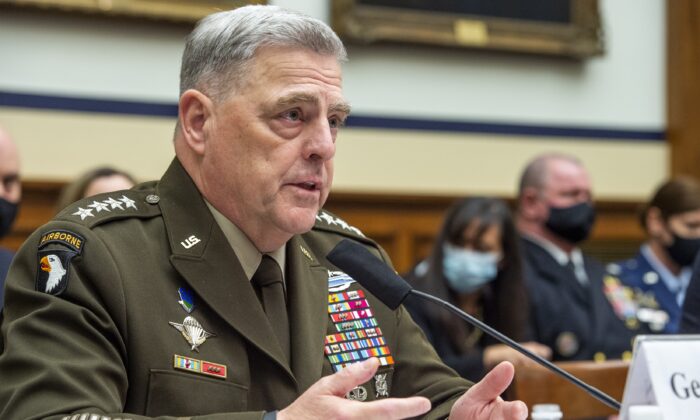 Chairman of the Joint Chiefs of Staff Gen. Mark Milley testifies during a congressional hearing at the U.S. Capitol in Washington on Sept. 29, 2021. (Rod Lamkey/Pool/Getty Images)
Viewpoints

With America Splitting, One Side Sees Treason as Highest Form of Patriotism

Since the early 1970s, when the Baby Boomer acolytes of George McGovern took control of the Democrat Party, the Left has been telling us that “dissent is the highest form of patriotism.”

That is to say, the more strongly you oppose the policies and moral values of your country, the more you love it. Like a devoted parent disciplining a wayward child, you are only showing it tough love in order to correct its ways, “fundamentally transforming” it (as Barack Obama might say) in order to improve it.

For those of you who did not come of age during the 1960s, this is a sloganized version of Herbert Marcuse’s infamous notion of “Repressive Tolerance”: you must tolerate us when we are powerless but we most certainly will not tolerate you once we have seized power.

Marcuse was perhaps the leading popularizer of Critical Theory, the bastard demon child of Karl Marx and Sigmund Freud, born of something called the Frankfurt School, imported by the United States in the personages of Marcuse, Theodor Adorno, Erich Fromm, and other “intellectual” refugees from Hitler’s Germany, and installed at the heart of the American system of higher education.

(For those desiring a philosophical and historical primer on the Frankfurters, my 2017 bestseller, “The Devil’s Pleasure Palace,” tells you all you need to know about this group of cultural sappers and their malign effect upon our country-as-founded.)

And so, for half a century, “dissent” we’ve had—in spades. From the anti-Vietnam protests (which were really anti-draft protests, and ended after Kent State and the abolition of the draft), to the soft Democrat-Media coup that brought down the Nixon White House less than two years after one of the greatest Republican landslides in history, to the protests against Ronald Reagan’s placement of Pershing missiles in Europe, to the stunned CIA silence that greeted the fall of the Berlin Wall—the Agency has always been anti-American—and into the modern era of the cult of Obama and the government-and-media-wide campaign to unhorse Donald Trump no matter how low they had to stoop, the Left has relentlessly assaulted the Republic with an eye to its eventual destruction.

Now—with a tied Senate, a tiny voting majority in the House, and Joe Biden in the White House—they feel their time has come.

The late Robert Conquest’s third law of politics reads: “The behavior of any bureaucratic organization can best be understood by assuming that it is controlled by a secret cabal of its enemies.” This goes double for the federal government under the McGovernite-Democrat Party, which was created by the disaffected, spoiled children of the Sixties, who had just come of voting age, precisely to oppose every aspect of America’s previous political and cultural history.

As the old question goes: if the Democrats really wanted to destroy our constitutional republic, what exactly would they be doing differently? As I dubbed them in my short monograph on the dreary history of this miserable party, they are a criminal organization masquerading as a political party, which at various times has made slavery, segregation, secularism, and sedition planks in their platform.

In the South, they started the Civil War, while their northern brethren relentlessly opposed Abraham Lincoln’s war and Ulysses S. Grant’s relentless prosecution of it, going so far as to run the failed Union general, George McClellan, against Lincoln in 1864 and then assassinate him less than a week after their general, Robert E. Lee, surrendered to Grant at Appomattox. They have been waging war on America ever since.

Which brings us to the Biden administration, whose lawlessness exceeds anything Real America has hitherto experienced. The obvious hinkiness of the last election leveraged the Fauci-induced irrational panic over COVID-19 to effect wholesale, unconstitutional changes in state elector laws and—just barely—deliver the tally to Joe Biden. Its punitive lockdowns destroyed our economy. Its reckless surrender in Afghanistan shamed our nation.

Meanwhile, incompetents have been elevated to senior positions in our armed forces. Our border with Mexico is now essentially undefended, while our boundary with a peaceful neighbor, Canada, which shares (or used to share) our Enlightenment values, has been slammed shut.

Meanwhile, a doddering figurehead commander-in-chief wanders around aimlessly, licking an ice cream cone and plotting the passage of multi-trillion dollar spending bills that will atomize our financial underpinnings and ensure that a Republican or conservative will never again win a national election.

The recent, defensively belligerent admission by General Mark Milley, chairman of the Joint Chiefs of Staff and the unworthiest apparatchik ever to hold that august title, that he did indeed contact the Red Chinese in the waning days of the Trump administration “in order to assure strategic stability” by warning them in advance of any imminent attack should Trump go rogue, was simply astonishing—a prima facie act of betrayal that should have been immediately punished by his firing, reduction in rank, and loss of all pensions and benefits.

Forget dissent. Clearly, in Milley’s eyes and in the eyes of the Democrat-Media Complex that greeted his James Comey-like declaration of a “higher loyalty” with orgasmic bliss, treason is now the highest form of patriotism. And, with that principle firmly established, the persecution of traditional patriots is now on.

Both the “pandemic” and the puerile, pointless demonstration at the Capitol on Jan. 6 have provided the Left with all the ammunition it needs to hunt down and repress its political opponents. Via the social-media tech companies, which can shut down opposition without falling afoul of the first amendment, the government is now going after real dissent by branding it “disinformation” and even “domestic terrorism,” especially as a gradually awakening citizenry is becoming aware of just how deep the rot is: from the highest ranks of politics, the military, and corporate America, to the lowliest school boards, Critical Theory and its subversive offshoots have joined with “social justice,” “anti-racism,” and “wokeness” to usher in a new, ugly, Orwellian America.

Back during the John Kerry campaign in 2004, the vice-presidential candidate, John Edwards, often spoke of “two Americas”—essentially (although he couldn’t say so at the time), a rich, mostly white America and a poor, mostly black America.

Now, once again, we have two Americas—but this time the split is far more sinister. On one side, we have traditional Americans of all races, good and decent folks who wish only to live and let live, abhor racism, believe in precepts of the Constitution and in the promise of America, love their country despite her flaws, rally round the flag in times of trouble, and take pride in being citizens of the United States of America.

On the other, we have the Marcusans, children, grandchildren, and soon enough great-grandchildren of central-European red-diaper babies who have majored in deconstructionism at the public’s expense, believe they’re on the “right side of history,” see themselves as heroic “resistance” fighters against right-wing bogeymen of their media-jazzed imaginations, and who really do believe that the ends justify the means.

And by “means” they mean “by any means necessary.”