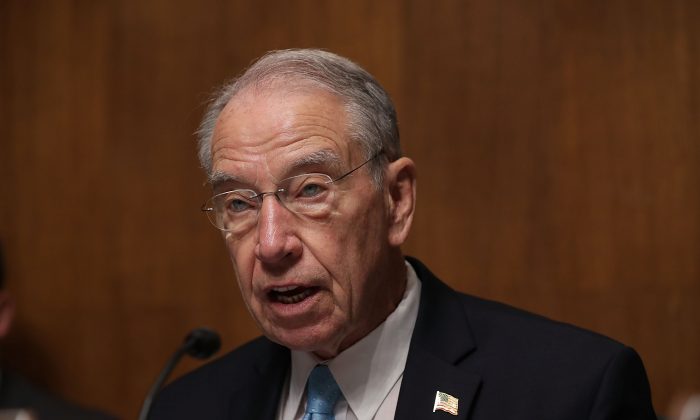 With Allegations of Russian Bribery, Judiciary Committee Calls On FBI Informant to Testify

A key informant on a Russian bribery operation around a deal to obtain U.S. uranium was allegedly prevented from testifying under the Obama administration, under threats of prosecution. As news emerges that the Clintons may have profited from the Russian deal, the Senate Judiciary Committee is now calling on this witness to testify.

Sen. Chuck Grassley (R-Iowa) requested the testimony in a series of letters on Oct. 18, which he sent to 10 federal agencies. He asked that the witness who is currently barred from speaking by the FBI be allowed to testify before Congress.

The Hill published an exclusive story on Oct. 17, showing that “Russian nuclear industry officials were engaged in bribery, kickbacks, extortion and money laundering,” which was tied to the Uranium One purchase that gave Russia 20 percent of America’s uranium supply.

The FBI witness who allegedly has details on Russian exchanges behind the deal was prevented from speaking to Congress under the Obama administration. The Hill reported on Oct. 18 that he was asked to sign a non-disclosure agreement (NDA) by the FBI under James Comey, and was threatened with criminal charges by the Justice Department under Lynch if he spoke to Congress.

In an open letter to Attorney General Jeff Sessions on Oct. 18, Grassley requested a copy of the NDA, and requested the Justice Department to release the witness to testify and “pledge not to engage in any form of retaliation against him for good faith communications with Congress.”

“These restrictions appear to improperly prevent the individual from making critical, good faith disclosures to Congress of potential wrongdoing,” Grassley states in his letter. “They also purport to limit the Committee’s access to information it needs to fulfil its constitutional responsibility of oversight.”

He added, “This Committee has oversight jurisdiction of the Justice Department, and if this NDA does in fact exist, it hinders the Committee’s ability to do its job.”

President Donald Trump also commented on the case in a series of tweets. He stated, “Uranium deal to Russia, with Clinton help and Obama Administration knowledge, is the biggest story that Fake Media doesn’t want to follow!”

Uranium deal to Russia, with Clinton help and Obama Administration knowledge, is the biggest story that Fake Media doesn't want to follow!