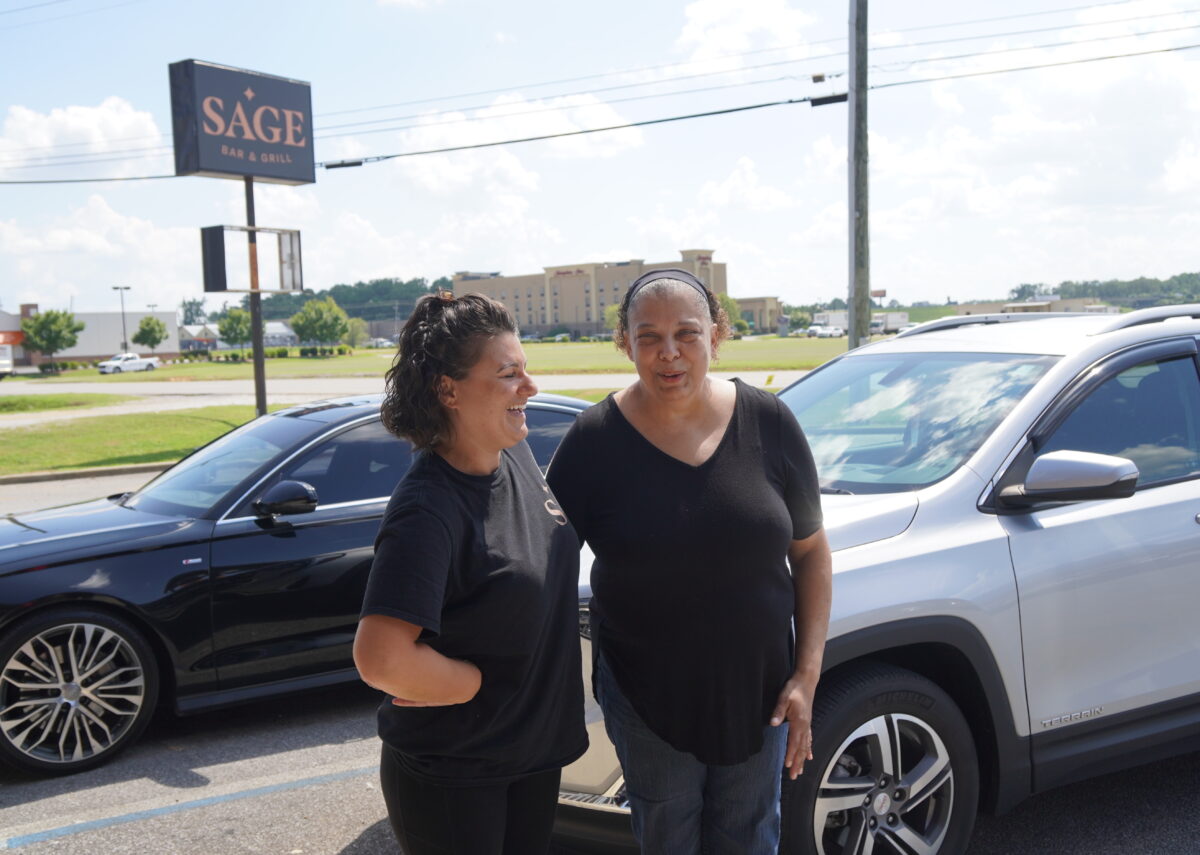 Katie Troncale (L) and Joyce King stand outside the Sage Bar & Grill in Calera, Ala. in July 2022 (Jann Falkenstern / The Epoch Times)
US Features

A Small Assist Goes a Long Way in Hard Times

CALERA, Ala.–Joyce King has always thought of herself as a “giver,” not a “taker.”

But when COVID brought hardships, the admitted “caretaker of others” had an experience she’d never had before–someone looking after her.

During the pandemic, a knee issue forced King to leave her job as a school cafeteria worker. Then, months after the shutdown and with the stimulus money gone, she found she needed to return to work.

King has worked in the food service industry for most of her adult life. She said she enjoys what she does and would not have it “any other way.”

“This industry, it helps you in life,” she said of her beloved profession. “It gives you a little bit more perseverance, I believe.”

When her job search took her to the locally owned, family friendly Sage Bar & Grill in Calera, Alabama, she was hoping for an opening in the kitchen, where she “feels at home.”

There were no kitchen jobs available, but owner Katie Troncale offered her a server position.

Although they had never met, she knew King was “special.”  She “felt it,” Troncale told The Epoch Times during a recent visit.

“You have to have some intrinsic value and some soul,” Troncale said of King. “That exudes from her so that you can feel it.”

King had her share of COVID-related issues. When her son, who lived in Minneapolis, became ill,  she flew him “home” so “mama could take care of him.” Even though he was an athlete, COVID hit her son hard; he was on a ventilator and slipped into a coma for a few weeks.

“He is OK now,” she said of the troubling experience. “But I was waiting for the other shoe to drop.”

And it did. Soon King found herself virtually homeless and she, her husband, and their 4-year-old adopted daughter moved in with her elderly mother. Then, her car broke down and she found herself struggling to get back and forth to a job she loved–and needed.

“I would call Uber or a taxi and depended on the kindness of friends to get me back and forth to work,” she recalled. “I’m not a complainer and I do not like to be a burden on others.”

If she couldn’t afford to pay friends for taking her back and forth to work or they would not accept money from her, King said she would just bake one of her “famous cheesecakes” for them, which she said they gladly accepted.

She tried to keep her transportation woes a secret from her employer. But Troncale did notice, though she “never let on” to King that she knew what her struggles were.

But “blessings come by blessing others,” said Troncale. A car came to her through “everything falling into place.”  She said that is the only way to explain how she came into possession of a much-needed vehicle.

“We had actually found and ultimately purchased the car for my boyfriend’s son, but that didn’t work out,” she said. “… and then we found out that Miss Joyce needed a vehicle. That’s when things got ‘sneaky’.” Another secret had to be kept.

The secret about gifting King the car was well-kept for more than a week. Troncale said it was the hardest thing they ever had to do, but “timing was everything.”

“One evening, I called her out to the front of the restaurant [pretending] like she was in trouble,” Troncale recalled.

And King fell for it.

“I thought I was going to get fired for some reason, by the sound in her voice,” King said, laughing.

Instead, Troncale said they presented her the keys to the car and the look on King’s face was “priceless.”

“She actually asked, ‘what is this for?’” Troncale said with tears welling in her eyes. “She was so surprised and so grateful and appreciative.”

The two women couldn’t retell the story without shedding tears. Troncale was “thankful” she could provide the gift–and King was “thankful for the gift.”

Things continued to fall into place. Before she got the car, King’s middle son had been due to go to a football camp at Mississippi State University and she said she “didn’t know how he was going to get there.” Three days later, after receiving the car, she was able to get him safely transported to Mississippi and back.

King said she plans to “pay it forward” because of the “blessing” she received.

And for Troncale, the experience has only made her want to do more.

“COVID did a number on everyone,” she said. “But, I have learned you help where you can, when you can. The blessings will come back to you in ways you can never imagine. You can only hope your story gets out, and other people can take up where you leave off.”

“We’ve got to help each other,” she said.