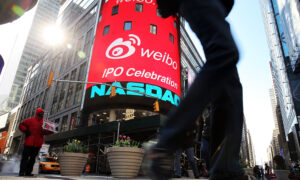 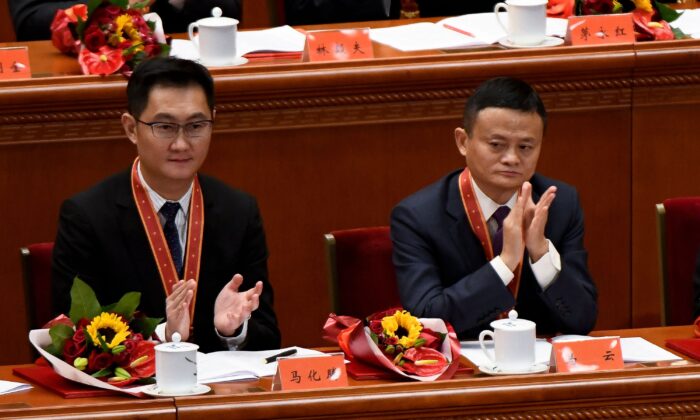 Alibaba’s co-founder Jack Ma (R) applauds with Tencent Holdings’ CEO Pony Ma during a meeting marking the 40th anniversary of China’s “reform and opening up” policy at the Great Hall of the People in Beijing, on Dec. 18, 2018. (Wang Zhao/AFP via Getty Images)
Chinese Regime

Chinese internet giant Tencent, one of the world’s top 10 companies by market capitalization, has fully integrated itself with the Chinese Communist Party (CCP) by establishing 275 Party branches within it and cooperating with the Cyberspace Administration of China (CAC).

On July 17, a post on Twitter about Tencent said that according to a June 24 report by Southern Metropolis Daily, Tencent, a company with over 60,000 employees, currently has 14 Party branches, 275 Party subdivisions, and more than 11,000 Party members of the CCP. Eleven members of the company’s Party Committee and three members of its discipline Inspection Commission are all core executives. In addition, there are 10 full-time and 724 part-time Party officials.

The post boasted that Tencent had done a “great job” in party building, ensuring that wherever the company’s business grew, the Party’s organization and work would follow.

Party Branches Abound Within the Company

Founded in November 1998, Shenzen-based Tencent established a CCP branch just five years later and a Party Committee in 2011, according to Southcn.com. Tencent designated July 15 as “Party Member Day,” an annual event for Party members of the company from offices across the country to celebrate the CCP.

According to a list of Tencent’s 7,723 Party members obtained by The Epoch Times exclusively in August 2020, the company has Party branches in various departments, such as social network operations, cloud industry products, value-added products, Tencent Music, QQ Payment joint products, social platforms, and so on. Some departments have multiple Party branches. The Internet Media Business Group, for instance, has eight Party branches.

With a 23 percent Party membership, the internet giant adheres to the principle of “Party members first” when recruiting new employees every year. For example, among more than 1,800 college students who joined it in 2017, there were 1,200 CCP members.

Led by its Deputy Party Secretary and composed of 80 percent CCP members, Tencent’s online information censorship team is responsible for guiding public opinion, deleting information that goes against the wishes of the regime, and conducting technical analysis of information reported by netizens, according to state-run Xinhua News.

In addition, the vice president is its Deputy Party Secretary, so as to ensure that all departments (including QQ, Wechat, and others) are under the command of the Party Committee, transmitting the voice of the authorities, promoting the ideology of the CCP, and maintaining the public opinion direction desired by the communist regime. Tencent was therefore awarded an “outstanding network culture enterprise” by China’s Ministry of Culture.

Pony Ma, Tencent’s co-founder, has also been actively courting the Party. In early June 2018, a photo circulating online showed Ma and JD.com founder Liu Qiangdong wearing Red Army uniforms and octagonal hats during a visit to Yan’an, a revolutionary base of the CCP.

A Tool for the Regime to Arrest the People

On Dec. 30, 2019, Dr. Li Wenliang, the first person who disclosed the CCP virus outbreak in Wuhan, posted through Tencent’s messaging app WeChat that seven SARS cases had been confirmed at Wuhan Huanan Seafood Wholesale Market. He was soon spotted by the authorities and summoned.

While Li was only summoned, the CCP has arrested a large number of Chinese through WeChat. According to a report on Minghui website on July 30, 2020, a wide persecution occurred in a Wechat group in May last year, which implicated people across the whole country. More than 300 Falun Gong students in a group chat were kidnapped and their property was confiscated. The group owner was illegally detained for more than two months.

According to Minghui report on July 15, 2020, the family of Wang Bin, a Falun Gong practitioner in Jiangmen city, received a criminal verdict from the court in early January 2019 that illegally sentenced him to eight years and extorted $4,500 for creating a group chat that spread information about Falun Gong.

According to a media professional in China who chose to remain anonymous, the CCP’s internet security inspectors and National Security Agency have been stationed in Tencent. The source told The Epoch Times that according to his information, the Tencent Tower has at least one floor dedicated to internet inspectors, including online censors, national security staff, and state security police. He did not know whether the government or Tencent pays for them.

“Tencent’s development has been seamlessly integrated with the regulatory authorities of the CCP,” he said. “That is to say, no matter how big Tencent can grow, how many members it can attract, and how many countries it can enter, the CCP”s internet watchdog will follow it everywhere.”

He also spoke about a recent CCP crackdown on big tech companies, which he sees as aimed at controlling them. Entering and monitoring these companies is one goal, while controlling data is another. An example is that the CCP has barred Ant Financial, 33 percent-owned by Alibaba, and Didi—China’s version of Uber—from listing in the United States, mainly for fear that they would leak Chinese data to the United States.

Although Tencent was also punished, it wasn’t fined as much as the $2.73 billion issued against Alibaba. Apart from the warring factions within the CCP, it also has something to do with the fact that Tencent founder Pony Ma is low-key and obedient to the authority, unlike Alibaba founder Jack Ma, who was publicly criticized for being high-profile.