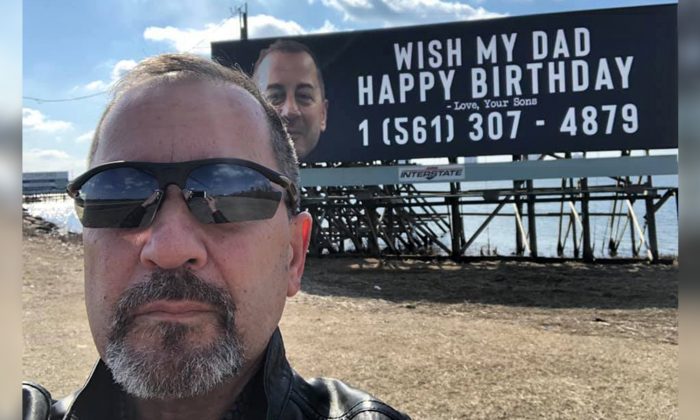 Two brothers celebrated their dad’s birthday in a big way and also blew up his phone in the process.

Needing a present for their father, Chris Ferry, the two brothers placed a billboard along a highway outside Atlantic City asking people to wish him a happy birthday, according to a local Florida station.

Put up on Thursday, the billboard says the words “WISH MY DAD HAPPY BIRTHDAY,” and is accompanied by his photo and phone number. Within minutes, their dad got his first birthday wish with a text from some random guy named Nick. From that point on, they have not stopped. (RELATED: Anti-CNN Billboard Pops Up Next To Network’s Hollywood Headquarters)

“We thought it was going to be a local joke—people would call,” said his son, who is also named Chris Ferry. “I guess when we put it on social media, that’s when it really started going crazy.”

After sharing it on Facebook, the dad has said that he has received messages from people all around the world, including the Philippines, Kenya and Luxembourg. Some people still call and sing him happy birthday, while others talk about their own fathers.

Referenced as the “billboard dad” by some people who have called, the dad has changed his voicemail message to “thank you for calling to wish me a happy birthday, I really, very much appreciate it … ”

Ferry tried to respond to each message at first but has given up and is looking forward to when the sign comes down in April. (RELATED: Ocasio-Cortez Responds To Billboard Shaming Her For Slamming Amazon)

When asked about what they will do next year for his birthday, his son responded, “I don’t know, maybe try to get a bigger billboard?”