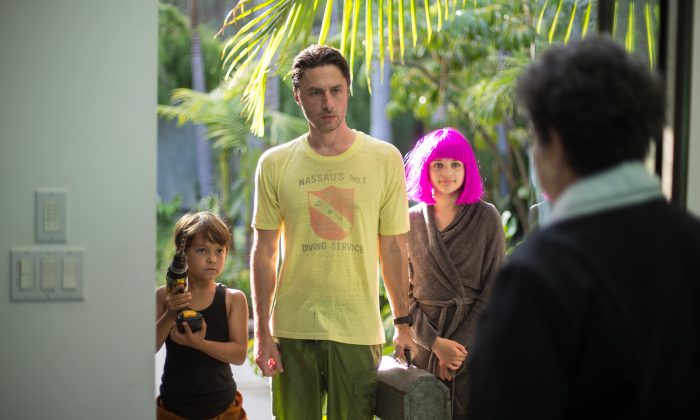 ‘Wish I Was Here’: Lost Without a Direction

Let’s be honest: “Scrubs” alum Zach Braff fell off the radar since his work in “Garden State.” Now he’s tried his hand at directing a comedy drama, “Wish I Was Here.”

Braff stars as struggling Los Angeles actor and family man Aidan Bloom, whose wife Sarah (Kate Hudson) is kept by the family’s financial needs in a soul-draining job as a bean counter.

Aidan faces a crossroads when his father (Mandy Patinkin) announces that he can no longer fund the children’s private school tuition because his cancer has worsened and will necessitate chemotherapy.

The resentment from Aidan’s wife and father over his choice of profession heightens. This leaves him with the only option of homeschooling his children while juggling auditions for small roles.

“Wish I Was Here” opens promisingly but hits a roadblock when it tries to be meaningful. Unfortunately, during its existential journey, “Wish” becomes a long-winded story that loses its way, much as Aidan does.

Most of the Blooms’ tribulations are as irrational as Aidan’s insistence on keeping the kids out of public school for fear of bullying. Worse, Braff and Hudson’s chemistry feels empty.

Aidan and Sarah are believable just at par as a couple that has grown tired of the challenges of supporting a family and each other emotionally. With limited interaction, they seem only to be going through the motions without any solid character development or motives.

Joey King and Pierce Gagnon, who play Aidan’s young children Grace and Tucker, provide most of the film’s comic relief and are very enjoyable to watch. Josh Gad, Ashley Greene, and Jim Parsons make appearances and are all delightful, but none provide additional oomph.

The action is spliced by a series of short scenes in which Aidan is a spaceman hero. The computer-generated scenery often depicts Aidan running away from a dark hooded figure. Its purpose may be to drive the movie’s themes of fatherhood and responsibility, but it serves as an incoherent and sloppy narrative that ultimately prevents one from taking the movie seriously, and it confuses more than complements.

“Wish I Was Here” could’ve been improved if it had kept a simpler story. What really shines is the soundtrack—featuring songs from Coldplay, Cat Power, and the Shins. The film’s soundtrack has generated more buzz than the film itself.

The stronger themes of fatherhood and chasing one’s passions easily become muddled in an attempt to be meaningful and melodramatic. It is up to the audience’s interpretation whether its loose ends were intentionally left to mirror life’s mysteries, but maybe it’s best to contemplate the meaning of your life without the guidance of “Wish I Was Here.”