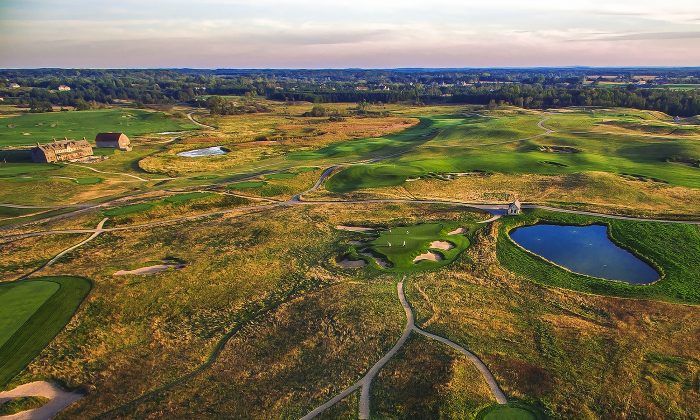 HARTFORD, Wis.—Mention the state of Wisconsin to most sports fans and images of hyperactive Green Bay Packers fans sporting cheese-heads is the most enduring image. Yet, the Badger State has made an impressive move saying “cheese” in becoming the primary destination for a number of the most prestigious global golf events.

The 117th U.S. Open at Erin Hills, 35 miles northwest of the state’s largest city Milwaukee will be the first held in Wisconsin and at the host site. The fanfare began building since June 2010 when the United States Golf Association (USGA) announced its flagship championship would be coming to Erin Hills. The dates of the championship are June 15 to 18.

In 2004, Wisconsin welcomed the PGA of America to stage its premier event, the PGA Championship, to Whistling Straits, the mega-golf complex just north of Sheboygan. Since that event two additional PGA Championships have been played, the last in 2015; in three years the 2020 Ryder Cup will also be played there.

In years past it has been the domain of other midwestern states such as Michigan, Illinois, and Minnesota to reap the benefits, but Wisconsin now has clearly pushed itself to the front of the line.

Erin Hills, located on over 600 acres, was created for the primary purpose of staging top tier events. Two other USGA Championships have been played since the course opened in 2006: the Women’s Public Links in 2008 and the U.S. Amateur in 2011.

Erin Hills is the design of three men: Dr. Michael Hurdzan and Dana Fry, who at one time were partners, and Ron Whitten, architecture editor for Golf Digest. The course can stretch to over 8,000 yards, but likely will play in the neighborhood of 7,500 to 7,700 yards to a par-72.

A few of the competitors playing in the upcoming U.S. Open played in the 2011 Amateur, but for the most part the course has no intersection with the overwhelming number of players competing for the second golf major of 2017.

The USGA’s desire to stage its grand event at a bonafide public facility is not a new practice. In 2002, the U.S. Open was played at Bethpage State Park’s Black Course in Long Island, NY. That was the first time the U.S. Open was ever played at a facility owned by a public authority.

Since then the U.S. Open has been played at Torrey Pines just outside of San Diego in 2008 and returned to Bethpage in 2009. Erin Hills is privately owned by operates on a daily basis. For those who do play, the course is a “walking only” layout with no power carts to whisk players around as done at other courses.

Interestingly, Erin Hills is far from being flat. The course was sculptured by glaciers and the uneven terrain has provided for creative placement of tees, fairways, and greens. The fairways consist of fine fescue grass and if weather cooperates can provide an ideal “firm and fast” playing surface. Players will need to pay particular attention when golf shots hit the turf with bounces potentially taking balls to unpredictable locations.

Dustin Johnson comes into the event as the defending champion and secure for the moment as the No. 1-ranked player in the world. The issue for the 32-year-old Johnson is recapturing his early season form since he missed playing at Augusta because of a fall in his rental house just prior to the start of The Masters. The last golfer to successfully defend a U.S. Open title was Curtis Strange in 1989.

Rory McIlroy, the world No. 2 returns to the competitive scene after nursing a sore back for several weeks. Among active players, the Northern Irishman has won four majors, but his last major triumph came in 2014 at Valhalla in the PGA Championship. McIlroy has shown the wherewithal to be dominating when firing on all cylinders, but a balky putting stroke has been his nemesis at critical moments.

U.S. Opens are fascinating because they provide opportunities for lesser players to emerge and show their skills. At last year’s championship at Oakmont, it was the improbable Andrew Landry who came into the event as the 625th ranked player and had to successfully negotiate qualifiers at the local and sectional levels to advance to the championship. Landry remained a fixture on the leaderboard until fading in the final round with a 78 and ultimately tying for 15th.

Let’s Not Go to the Videotape

There have been comments from a few of golf’s heavyweights, notably four-time winner Jack Nicklaus, who weighed in during his host role at the recent Memorial tournament, that the USGA should favor old-time clubs that long hosted the U.S. Open.

Adam Scott, the talented Aussie ranked 12th in the world, opined the USGA needs to be prudent on how Erin Hills is set up to avoid creating a test of golf that borders on the extremely difficult just to keep scores at or above par.

Erin Hills will clearly command the initial spotlight. The reaction of the players and the quality of the play will certainly be main storylines as Wisconsin’s renowned dairyland plays host to America’s national golf championship. How the event plays out could well determine if a future U.S. Open is indeed on the agenda.