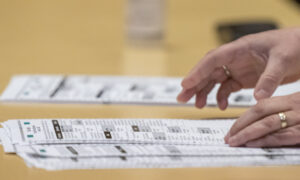 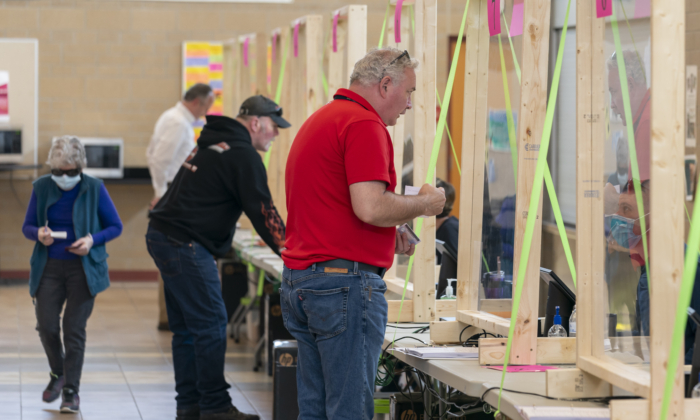 People check in to vote at a polling place in Sun Prairie, Wis., on April 7, 2020. (Andy Manis/Getty Images)
Wisconsin

The Wisconsin Supreme Court agreed to hear an appeal by the campaign of President Donald Trump over a challenge to the result of the presidential election recount in Milwaukee and Dane counties.

With the Dec. 14 deadline for the Electoral College vote looming, the conservative-majority court set a hearing for noon on Saturday.

The court agreed to take the case hours after a circuit court judge sided with the defendants and affirmed the results of the election in the state.

The Trump campaign challenged roughly 220,000 ballots recounted in Milwaukee and Dane counties last month. The ballots fall into four different groups, including absentee ballots cast by voters who did not fill out a ballot request application, and ballot envelopes that had missing witness address information filled by election clerks.

Wisconsin Circuit Court Judge Stephen Simanek adopted all of the arguments proposed by the defendants, explaining that in deciding so he relied on guidance that the will of the voters should prevail in resolving any election-related administrative challenges.

At the center of the dispute in the lawsuit was whether Wisconsin elections officials followed the state’s election law in recounting the ballots challenged by the Trump campaign. The campaign had challenged the ballots arguing that they were cast, counted, and recounted in accordance with rules and procedures promulgated by state officials in violation of Wisconsin’s election laws.

Jim Troupis, the attorney representing the Trump campaign, argued that the state’s legislature enacted the statute related to absentee ballots in recognition that that form of voting is different from in-person voting and requires stricter rules to protect the integrity of the ballots.

“There is an assumption here underlying the defendants’ argument, and that is that you can change the statute at will—that WEC [Wisconsin Elections Commission] has a good idea, so why not just do it? That’s not the way to law works. The statutes must be complied with. Absentee voting is subject to enormous fraud. That’s why this state made the choices it did and that’s why the complaint must be granted,” Troupis said on Friday.

The defendants, the Biden-Harris campaign, argued that election officials followed guidance from the WEC, which had been in place for either months or years prior to the Nov. 3, 2020, election. Troupis argued that the WEC’s guidance is no excuse for violating the state’s election law, citing a prior case in which the commission’s guidance was deemed to be “not law” and to “impose no obligation” on officials conducting the recount.

Simanek opined that the WEC rules were in line with Wisconsin election laws.

“Because the court is satisfied that the rules and guidelines applied in each of the disputed areas, are reasonable and a correct interpretation of the underlying early absentee voting laws, the certification of the results of the 2020 Wisconsin presidential election, after the Dane County and Milwaukee County recounts, is affirmed,” Simanek said.