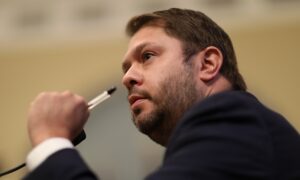 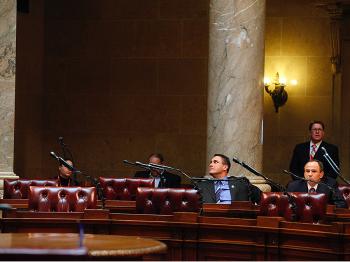 Wisconsin Senators Ordered Back to Work

Genevieve Belmaker
Genevieve Belmaker is a former reporter and editor with The Epoch Times.
View profile
Follow
biggersmaller
Print
The Wisconsin state Senate issued a formal warning to its 14 missing Democratic senators on Thursday: come back by 4:00 p.m. or be brought back.

The resolution notes that the missing legislators can be punished for contempt since they have not obtained permission for a leave of absence. They were not present for roll call on Feb. 17, 18, 22, 23, 24, and 25, and March 1 and 2. The missing members include Sens. Carpenter, S. Coggs, T. Cullen, Erpenbach, Hansen, Holperin, Jauch, C. Larson, Lassa, Miller, Risser, Taylor, Vinehout, and Wirch.

The resolution states that the missing members be compelled to attend, according to a means decided on by the Senate. If they fail to appear by 4:00 p.m. on Thursday March 3, they will be held in contempt and disorderly behavior. The Senate’s sergeant at arms will also be authorized to bring the absent senators back, possibly with the assistance of police and warrants.

All absent senators will be given a chance to address the Senate chambers regarding the reasons for their absence.

The resolution will remain in effect until a quorum of at least 20 senators exists for a vote on the collective bargaining bill.

In a statement issued to Wisconsin media, Sen. John Erpenbach said that the resolution would do nothing to change their stance.

“All fourteen of us remain in Illinois, very strong in our convictions. Issuing arrest warrants at 4 p.m. isn’t going to solve the problem,” stated Erpenbach. “This is a debate about protection of the middle class in Wisconsin; that is what the Republicans should be focusing on.”

The warning came in the form of Senate Resolution 1, introduced by Republican Sen. Scott Fitzgerald. According to a statement issued on Fitzgerald’s website, who is Senate majority leader, the missing senators’ “stunt” of leaving the state to avoid a vote on a contentious collective bargaining labor bill needs to end.

“The Democrats’ ongoing media stunt has placed a significant burden on the Capitol staff who, unlike their bosses, actually do come to work and do their job every day,” stated Fiztgerald. “Unfortunately, Democratic staff members have been forced into a role of covering for their bosses in their absence.”

Fitzgerald added that he is being forced to authorize pay for the staff of the missing Democrats. He also restricted the use of copy machines to offices with fewer than two unexcused absences because of “discrepancies and highly unusual usage of the office copy machines.”