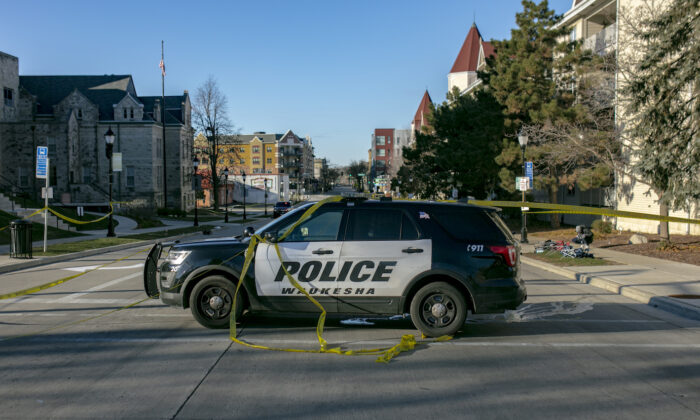 A police vehicle blocks off a road entrance in downtown Waukesha, Wisconsin, on Nov. 22, 2021. (Jim Vondruska/Getty Images)
Crime and Incidents

A middle school in Wisconsin will hold classes virtually for students in the Kiel Area School District after a number of bomb threats were reported this week, officials said.

The city also canceled its Memorial Day Parade after the third bomb threat that week, citing “ongoing security concerns in and around” the city.

The City of Kiel Police Department announced in a statement that authorities received an email with the latest bomb threat at 6:48 a.m. on May 26.

No devices were located at Kiel Middle School after a thorough search of the building was conducted by police and local fire officials.

“The Kiel Area School District had already made a decision to hold classes virtually today, for their entire district, so the Kiel Middle School was locked and vacant,” police said. “No students or staff were present in the middle s school or district offices.”

On Monday and Tuesday, similar emails with bomb threats were sent to groups of people, including “multiple news outlets.” The perpetrator made the threats in reference to the ongoing Title IX investigation against three eighth-graders at the middle school.

As previously reported, the families of the three students said their boys are being investigated over allegedly “misgendering” a female student who identifies as non-binary. The student at the center of this has not been publicly identified.

A school official notified the parents in April that the trio had been charged with sexual harassment for not referring to the student’s preferred pronouns of “they” and “them.”

Under Title IX of the Civil Rights Act of 1964, sex-based discrimination in federally-funded schools is prohibited. However, Luke Berg, an attorney with the nonprofit law firm Wisconsin Institute for Law and Liberty, told The Epoch Times that not using the preferred gender pronoun for someone doesn’t constitute sexual harassment.

“You need the detailed allegation so that you know how to prepare and respond to what you’re being charged with,” Berg added. “None of the families had that.”

After the students were interviewed, the families asked for a formal complaint. They received a one-page statement alleging the use of the incorrect pronoun with a page and a half of notes from a music teacher describing “a few minor incidents in the classroom,” Berg said.

“The clear theory of the school district is once a student has told other students what their pronouns are, any misuse of the pronouns after that is punishable,” Berg said.

The person responsible for the bomb threats said that unless the school district halts its investigation of sexual harassment against the three students, threats could escalate and might spread to other areas of the community, including the city hall, grocery stores, and power stations, WBAY reported.

Brad Ebert, the school district’s administrator, said in an announcement that the students will finish the school year in virtual learning, the station reported. The end of school is June 3.