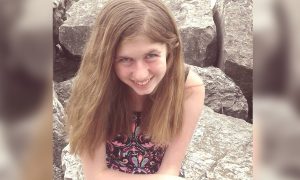 The Wisconsin residents who found missing teenager Jayme Closs, who was discovered alive on Jan. 10 after going missing in October 2018, have spoken out about what happened.

Jayme, 13, was taken from her house in Barron and where her parents were found killed. A nationwide search turned up few clues and was eventually scaled back.

The break in the case turned out to be Jayme escaping from her captor and seeking help from residents in Gordon in Douglas County. Police officers arrested the kidnapping suspect in the same town, the Douglas County Sheriff’s Office said. The suspect is reportedly a 21-year-old.

A woman was walking her dog about 9 miles of east of Gordon, in an area that’s mostly woods and cabins and has few year-round residents, when Jayme came up to her and asked for help.

The dog-walker was identified by her husband Forrest Nutter, a retired police officer, as Joanne Nutter, a social worker.

Nutter told the Daily Beast that his wife was walking the dog near the cabin the couple owns and “the girl just came out of the woods.”

Joanne Nutter told the Minneapolis Star-Tribune that she thought she knew the girl and her belief was confirmed when Jayme said her name.

Kristin Kasinskas, a teacher, was at home around 4 p.m. when Nutter frantically knocked at her door.

Kasinskas saw the woman standing with a skinny, dirty girl.

“This is Jayme Closs! Call 911!” the neighbor said. Kasinskas did.

Her husband, Peter Kasinskas, said that Jayme was quiet, her emotions “pretty flat,” while the family waited with her for about 20 minutes inside their home as police officers rushed to the scene.

Kristin Kasinskas said that the couple offered her water and food but she declined both. They introduced her to their new puppy. Jayme told them she didn’t know where she was.

“I honestly still think I’m dreaming right now. It was like I was seeing a ghost,” Peter Kasinskas said. “It was scary and awesome at the same time. My jaw just went to the floor.”

Jayme also told the trio that she was abducted from her house.

“She didn’t express any fear fear,” Kristin Kasinskas told KARE 11. “She didn’t say that she was afraid this person was coming after her.”

But she did say that somebody had killed her parents. “We kind of just talked with her, nothing too specific about what was happening,” Kasinskas said.

Family members said even they hadn’t received much information about what exactly happened. Officials said they planned to give details at a Friday morning press conference.

Jennifer Smith, Jayme’s aunt and godmother, told ABC early Jan. 11 that the family would be reunited with the missing girl after Jayme was released from the hospital. The release was scheduled for Friday afternoon.

“I hear she’s doing great and getting rest right now,” she said. “All I know is that she escaped from where she was being held, saw a lady walking a dog, and ran to the lady asking for help.”