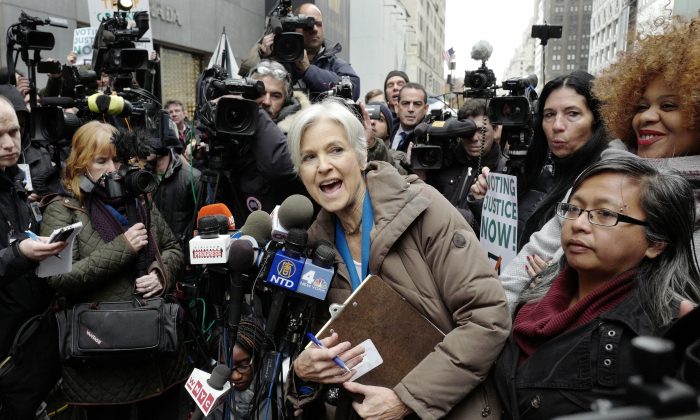 The required $3.5 million payment that triggered Wisconsin’s presidential election recount came in just under the wire.

Stein gained 66 votes in the recount—meaning she essentially spent $53,030 per vote gained. Donald Trump gained 131 votes over Hillary Clinton in the recount.

Green Party presidential candidate Jill Stein requested the recount that concluded Monday. But before it could begin, she had to pay the estimated $3.5 million cost.

Wisconsin Elections Commission attorney Nate Judnic reported at a commission meeting Wednesday that “the money almost did not come in.”

Wisconsin Elections Commission Chairman Mark Thomsen says, “It would have been a real mess if it came in at 4:31.”

Trump on Tuesday went to Wisconsin and spoke at a post-election victory rally.

“After all of this money was spent—by the Democrats, believe me, they were behind it, OK?—And the Green Party. Wonderful party,” he said at the rally.

“She got less than 1 percent, but she thought she was going to catch us,” Trump said, referring to Stein, who raised millions of dollars via an online fundraiser for the recount. Later, the Clinton campaign indicated that they would participate in the three-state recount effort.

“What did they spend: $3.5 million for 131 votes? That’s OK,” he said. “Tells you how important every single vote in America is,” Trump added.