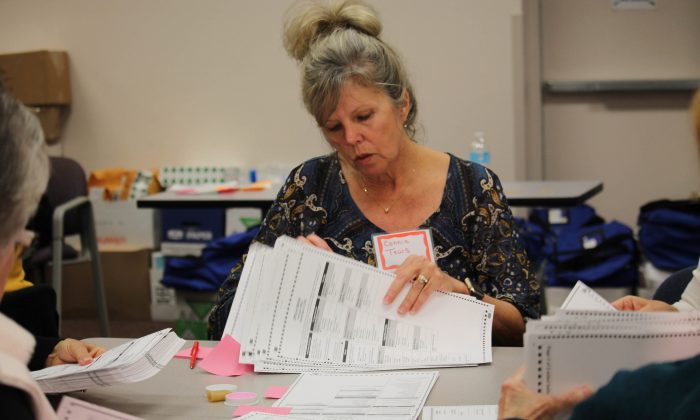 Connie Tews counts ballots in Kenosha, Wisconsin, at the request of Green Party candidate Jill Stein on Dec. 2, 2016. The recount is being undertaken even though the results are unlikely to change the outcome. (VNEWS INTERNATIONAL LLC/AFP/Getty Images)
Politics

The recount in Wisconsin is showing that President-elect Donald Trump has gained votes over rival Hillary Clinton.

As of Wednesday morning, the recount shows that Trump gained about 146 votes over Clinton, with 23 of the state’s 72 counties having finished, Fox News reported. Trump gained 105 votes and Clinton dropped 41 votes.

The recount was initiated by failed Green Party candidate Jill Stein, who received about 1 percent of the vote, who said she wants to verify the accuracy of the count. Stein and her lawyers have claimed—without providing evidence—that voting machines are vulnerable to hacking.

“We’re not finding any problems with the machines,” Reid Magney, a spokesperson for the Wisconsin Elections Commission, told Fox. “The Stein campaign wanted a recount because they thought there was some problems with our machines and that was not the case.”

Stein has been criticized for starting recount efforts in Wisconsin, Pennsylvania, and Michigan—all states narrowly won by Trump, with some suggesting she’s trying to sway the vote to Clinton. However, she has denied such claims, saying it’s merely to ensure accuracy in voting. Her campaign raised more than $6.5 million via an online fundraiser for the initiative.

Stein paid about $3.5 million in Wisconsin for the recount.

US Judge to Hear Arguments in Pennsylvania Election Recount

Trump won Wisconsin by approximately 22,000 votes over Clinton. The recount deadline is Dec. 13, and there are questions as to whether the state will complete it in time.

“The overall results will not change,” Magney said after the recount. “It’s two votes here, two votes there.”

According to The Associated Press, a federal judge has ordered a hearing on the Green Party request for a presidential election recount in Pennsylvania.

U.S. District Judge Paul Diamond scheduled the hearing for Friday, with the Republican Party and Trump opposing a recount. They’ve warned that the case threatens Pennsylvania’s ability to certify its election results before the Dec. 13 federal deadline.